An anecdote about United States (US) military intelligence in the book I’m currently reading – Good Strategy, Bad Strategy – prompted me to draw a parallel with user research and how we make decisions in service and software development. 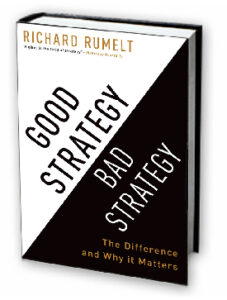 Richard Rumelt’s book: Good Strategy Bad Stratgy; The difference and why it matters

In his book, Richard Rumelt includes the story of General Norman Schwartzkopf’s strategy to liberate Kuwait from Sadam Hussein’s invading Iraqi army in 1991. The strategy was so successful that the offensive was over in 100 hours, when many had feared long, drawn out trench warfare similar to the First World War.

The thing that caught my eye was the US Army’s use of Russian military intelligence. Rumelt says that Schwatzkopf was confident that Sadam was averse to using chemical weapons, fearing the US would retaliate with their nuclear capability.

Had Sadam used chemical weapons (as he had numerous times duing Iraq’s war with Iran just a few years earlier), US casualties would have been in the tens of thousands and the swift victory that earned the General his “Stormin'” prefix wouldn’t have happened.

Perhaps it’s a measure of the times we live in, 30 years on from these events, but I couldn’t envisage the United States Army taking such enormous risks on the basis of “Russian military intelligence”.

So what form might this military intelligence have taken?

Perhaps it was a combination of all three.

But if I’d been General Swartzkopf, I know which source I’d have had most confidence in.

What’s this got to do with user research and service design?

When we undertake service and software enhancement projects, what insight are we using to inform our plans?

But bias does exist when we collaborate. Both intentional and unconcious.

Enhancement projects bring change. Change can be a positive thing for stakeholders in a service, but it can also be seen as negative. Roles become obselete. Positions of power or influence can be lost. New metrics and analysis can shine a light on things that some would ideally like to remain buried. So appraisals of current situations can be intentionally presented in particular ways to attempt to achieve a particular outcome.

And appraisal of a situation always comes with unconcious bias. I’ve been involved in change and enhancement projects at Edinburgh for over 15 years. One thing stands out consistently. Services don’t know their customers well, a significant proportion barely understand their needs or experiences at all.

And yet we repeatedly commit significant sums of time and money based on senior service perceptions which can be a long way from the customer experience, and don’t fully realise the outcomes we seek. IT project methodology works on the assumption that business representatives can tell software developers what they need up front.

Building the right thing comes from gathering a range of perspectives

So am I saying don’t listen to senior stakeholders? Of course not. Strategic direction and joining the dots across a big complex organisation is essential.

But informing the big picture and stress testing strategic direction through regular, ongoing monitoring of interaction between customers and service operations staff is the only reliable way to ensure you’re taking the right steps.

Nobody would have expected Schwartzkopf to commit troops to a risky situation on the basis of unvalidated insight.

It’s the same for us. This is what makes user research so important to the delivery of quality student experiences.

We need our ‘spies on the ground’ like Gayle Whittaker in our team.

Developing content about teaching in 2021-22: the start of a process, not the end