In our latest lunchtime meetup, UX Service Manager Neil Allison gave a preview of the talk he presented at UX Scotland. He shared a tried and tested method of bringing teams together to prioritise usability issues effectively.

Usability testing is one of the most valuable techniques there is to improve the digital products we create – or anything we design that people interact with. The UX Service works alongside project teams to conduct usability testing regularly and we want to encourage people that it’s a process that you should conduct repeatedly throughout the life of a project.

It is straight forward and extremely beneficial. However, as Neil explained, there are challenges.

With reference to Caroline Jarrett and Steve Krug, who surveyed the UX community in 2012 to find out why usability problems go unfixed, Neil explained that it’s not all plain sailing. We face common challenges that include:

These were challenges that Neil faced back in 2013 when he was the University’s CMS Service Manager during the period the University switched CMS to the open-sourced Drupal-based EdWeb system – a big change that required a bigger team and new methodologies to effectively execute the project on time.

With no pre-existing culture of being user-focused in the way projects were run, things needed to change. Neil looked towards the work of Steve Krug, in particular his book Rocket Surgery Made Easy.

Steve Krug’s ‘Rocket Surgery Made Easy: The Do-It-Yourself Guide to Finding and Fixing Usability Problems’ is the ultimate handbook for anybody who wants to start usability testing.

Anyone who’s ever watched a usability test knows that they work remarkably well. Sitting someone down and having them use what you’re building while you watch is the best way to ensure that it will actually be usable. And yet very few organizations do usability tests. And the ones that do don’t do them very often. Why? It’s simple: most people think usability tests are expensive, time consuming and hard to do. But they don’t have to be any of those things. In fact, I wrote Rocket Surgery because I know from years of experience that valuable, effective usability tests can be done quickly and easily, with little or no cost. – Steve Krug

Neil adopted Krug’s approach and began conducting iterative cycles of usability testing. The tests were recorded and the project team would gather to watch the footage. The team would use Steve Krug’s method of individually noting down the top three usability issues they observed after each video.

Neil also wanted to bring in the wider user community who were interested in the progress of the project to the sessions. If conversations were not fully productive with 6 people in the room, what would happen with 40? Something needed to change.

Neil told us about David Travis who introduced a means for project teams to talk about usability testing in an effective way. Based on ‘Red Route’ usability, Travis created a way to easily prioritise usability issues in a collaboratively and objectively. This was the method Neil adopted as it allowed the team to grade the usability issues they observed using a three question flow chart.

Important roads in London are known as ‘red routes’ and Transport for London do everything in their power to make sure passenger journeys on these routes are completed as smoothly and quickly as possible. Define the red routes for your website and you’ll be able to identify and eliminate any usability obstacles on the key user journeys. – David Travis 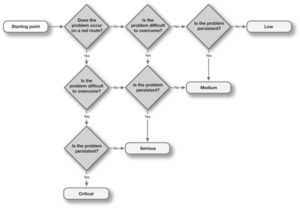 How to prioritise usability problems – decision tree by David Travis

By asking the three questions on the chart, every issue is given a severity grading, from low to critical. This method significantly channelled the conversation and allowed the team to stay on target and get the most out of their meetings. It also worked well with larger groups.

Neil’s slides from the session

Take a look at Neil’s slides to learn more as he provides a step-by-step guide on how you can run a collaborative usability testing playback session as well as his own top tips.

As always, the session was a great opportunity to meet, talk to and learn from colleagues. We followed the talks with a discussion based on a group-organised agenda. We used the Lean Coffee approach to decide what to talk about and for how long. 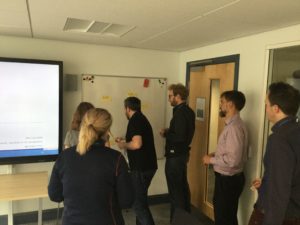 The group vote on which topics to discuss

The topics we chose to discuss in the session included:

Keep an eye out for the next UX meetup. We would love to see you there.

Write-ups of other sessions we’ve run 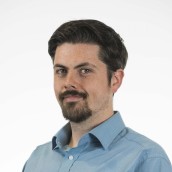 UX in airports: Consistency is key