Over the past couple of months Vanessa and I have been supporting the development of a new web app for students. The Web, Graphics & Interaction Team invited us to get involved and help them make their new service as quick and user-friendly to use as possible. The collaboration has been a great success.

The app is designed to help students find out where PC labs have space available, and is intended be very quick to use on mobile devices. It provides the information in both list and map form, with the user able to prioritise results by availability (where are there most PCs free?) or geographic location (what’s available near to me?).

The original concept for the app was developed by University students during Innovative Learning Week, and the idea was so good that IS decided to take it on and progress it as a supported service for the coming academic year.

Martin Morrey, Head of the WGI Team, approached me to support the development. They had already significantly enhanced the original student concept, but wanted to find out what students thought of it and to avoid any big issues associated with its use. What they definitely didn’t want to encounter was a deluge of support calls and feedback in the early months of term when tens of thousands of students were exposed to it. 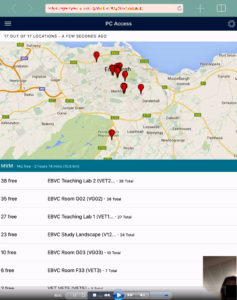 The original interface that we tested presented some notable usability issues that the team were able to go on and address.

We took the work-in-progress app, and with a test script we worked up based on what we believed to be a common scenario, headed off to the Main Library and other public spaces to grab students for some quick testing.

Working on an iPad and iPhone with some recording equipment running in the background, we could literally walk up to students and (once they’d confirmed they were happy to take part!) hand over the device.

We first asked them to tell us what the app was for.

Then we asked them to do a specific task relating to finding out where PCs were available within 5 minutes walk.

Finally we asked them whether they thought this was useful, and if there was anything missing.

In a matter of hours we had 8 short videos to play back to Martin and his team in a workshop environment. (The process I used is exactly the same as what I promoted through the open invite showcase sessions.)

The power of iterative improvement 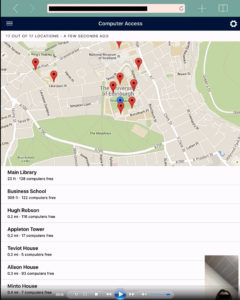 Enhancements to the interface and functionality significantly improved the students’ experience.

What we saw when reviewing the first set of videos was not too pretty. Students could use the app, but it took them a while to understand what it was, it wasn’t anywhere near as fast to use as we’d hoped and the features prioritised in the interface did not match their expectations.

But this is exactly why teams should undertake usability testing. We weren’t doing this to get a ‘pat on the back’. We were doing this to see where problems lay, and get some insight into how we might make things better.

So the team took away a list of prioritised issues to address and a couple of weeks later got back to me to say they were ready to go again.

We repeated the process with the mobile devices in public spaces, and set exactly the same questions.

This time the videos were significantly different. They were much shorter for a start.

Students grasped the app’s purpose almost immediately, they could complete the tasks set without any problems and we were hearing unsolicited feedback like:

This is great! Is it available to use right now?

Student participant in our second round of usability testing

The leap forward in performance was tremendous and illustrated the value of working in a cycle of testing and refining.

Of course not all development projects can see such rapid improvements but in this case – a simple app with a single purpose – two rounds of testing was enough. The key point here is that if you want user friendly products, you need to expose your work regularly to your users. And that is precisely what I have designed the Usability Testing Service to facilitate on behalf of teams who don’t feel they have the time or expertise to achieve this independently.

I think it also goes to show that even when something has been designed by the target user group it doesn’t necessarily lead to user-friendly results. Remember, the original app was created by students, for students. There really is no substitute for regular usability testing.

So pretty quickly, and with relatively little outlay, the WGI Team have a product that they are confident is easy to use, meets students’ expectations, and will be popular in the coming term.

They also have a list of areas that would enhance the product still further, should they get more funding in future. (We heard many times that students make decisions on where to go for open access lab computing based on the facilities available too – printers, Macs, specialist software etc – so this extra layer of information would almost certainly enhance the experience).

Working with Neil on this project has significantly enhanced the quality of our app, with relatively little effort or outlay on our part. The value of exposing our work to users at an early stage has been immense, and we now launch the new service with great confidence that we’re providing something that students will value and use constantly.

We were able to get the Usability Service involved at an early stage in our project, and throughout we received constructive feedback on the direction we were taking. It was extremely useful to have someone to give an external, expert perspective on what we were doing. After completing the interface testing with students, I was surprised at how much useful feedback we got from even just a few minutes of testing each time. Through short, targeted sessions we could clearly what wasn’t working, and then take that away to develop further. I found that it gave a lot of value and would welcome a chance to get them involved again in future projects.

Watching users interact with my work was both painful at times, and enlightening. It’s very rewarding to watch students respond so positively to the app once we addressed the biggest issues the testing uncovered.

Get in touch if you’d like to discuss how the Usability Testing Service may be able to help you.