Reaching consensus on the ideal user experience can be challenging. It’s even harder when the product doesn’t exist yet. I’ve been helping the Cityscope development team focus their attentions to deliver something that’s both useful and easy to use.

I’ve recently been involved in an exciting new project to develop a tool that exposes Edinburgh research data to staff, students and local communities.

Cityscope promises to offer new teaching and learning opportunities, and to open up data about the City of Edinburgh (ultimately) to pretty much anyone who’s interested. 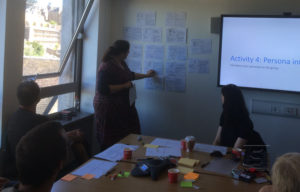 At the point I was asked to get involved, things were pretty open. The team had solid foundations. They had established what could be done, and the tools and platforms they were going to employ to do it. But there was quite a bit of discussion among the project’s steering group about what they were to do next, why and for whom.

One thing was clear though. For the project to ultimately be a success, this needs to be a tool and a service that is comprehensible to non-tech, non-data people, and something that is as easy as possible to use.

Working with project manager Morna FIndlay I proposed a series of workshops that would enable the team and its steering group to reach consensus about the features that should be prioritized, who they were primarily serving and why.

In our workshops we:

We got together on three occasions, each time for three or so hours. 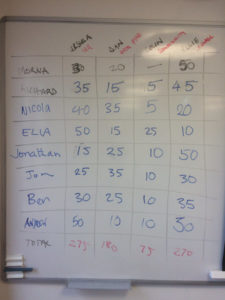 The refined personas were scored by every member of the workshop to collaboratively identify the audiences most important to the project’s success.

In our first session, around 10 stakeholders joined us to explore who we thought our target users were, what they wanted to do with Cityscope and why.

The group was a mix of academic staff, digital engagement specialists, developers and the project manager. Through a series of collaborative exercises, we narrowed down the target audiences and developed proto-personas that facilitated discussion about the kinds of people who were critically important at to the project’s success, their relationships and how they might be engaged.

The group generated around 20 very rough personas and introduced them to the workshop. Through this process we identified trends and were able to identify the common ground. From this, I was able to harmonise these ideas into 4 personas after the session (with much support from Lauren), ready for review when we next got together.

About a week later we reconvened, with broadly the same set of workshop attendees.

Our first job was to review and ratify the persona development work I’d done outside of the session to ensure that I’d not misrepresented anything fundamental from the first workshop.

The most important thing to bear in mind here is that these personas were not based on any research, but were developed to foster a shared vision amongst the group. One of the most important tasks to undertake in the coming months is to validate our assumptions about the user groups through ongoing engagement and user research activities. The personas will evolve.

Finally, the group assigned a priority score to the personas which quickly revealed that two were considered far more important than the others. 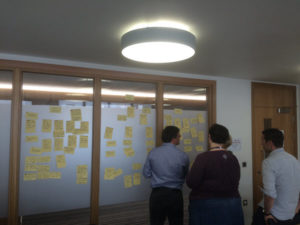 Through this process we were able to confirm that certain fringe audiences were not critical to the project’s success and indeed even amongst those user groups considered important, for the purposes of the initial launch and subsequent months, undergraduates, low-tech users and engaged lecturers are most important.

In this session we listed and prioritised measurable business outcomes we might use to demonstrate that the project was on track, we identified goals our personas might have in the context of using the Cityscope product, and we brainstormed features that could contribute to achieving both of these.

Through a mass of post-it notes, we generated eight hypothesis statements that the team could then focus on validating in the process of their upcoming development work. 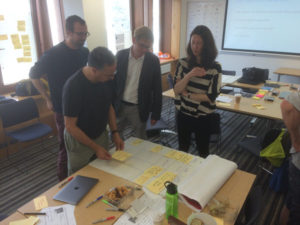 Cityscope stakeholders collaborate to identify potential features that will support the project’s goal.

And here’s an example of the Lean UX hypotheses we developed:

[Our priority persona] if Ursula

[Proposed feature] through labelled coursework projects that are searchable.

Scientists like me are generally wary of a process such as persona creation that involves “making things up”. We like hard data. However, the process Neil took us through in our two workshops brought out the preconceptions and assumptions we already had about users of our software. These ideas were implicit and the personas now make them explicit.

The final time we got together for a workshop, we reduced the group to the development team as it was felt that the level of detail we were about to get into was not appropriate for the Project’s steering group. 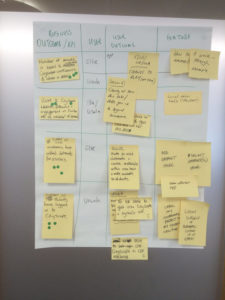 Lean UX hypothesis statements produced at the end of the workshop

Before we could get into this activity though, we welcomed new development team members who were coming on board due to others leaving the University. It was a great opportunity to introduce the personas and begin to demonstrate their value.

I was particularly happy to be able to step back in these familiarisation exercises and let Morna the Project Manager and Richard the Lead Developer explain who the most important users were and why. Their clarity and consensus when doing this informally was to me a great indicator of the effectiveness of the work we’d done so far.

We then picked on one of our hypotheses from the previous session that was felt to be particularly important, and ran through a series of brainstorming and prioritising activities to begin to shape an experience map that highlighted important service design requirements.

As a final step, we then took a key touch point in the map we’d just developed and began to explore what the Cityscope user interface might look like through a collaborative sketching activity.

This is by no means the end of the road for user experience research and design work on the Cityscope project. At this stage though, we’ve achieved the initial goals Morna and I set out earlier in the summer:

Most importantly though, the team has the experience and core skills to continue bring user-focus to their work even if they are unable to involve me in the coming months’ work. They can map out further critical experiences, and they can collaboratively develop interfaces to try out with real staff and students.

This has been a very rewarding and enjoyable process for me, and I hope to be able to provide further updates on our collaboration in the coming months as the project begins to build the features that will ultimately deliver an exciting new way for students, staff and the broader Edinburgh community to engage with our university’s world class research outputs. 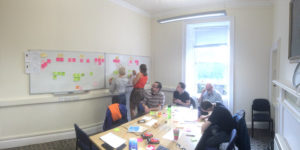 If any of these workshops or activities sound like they would be useful for your project, or if you’re interested in exploring new ways of getting your team actively collaborating, get in touch.

I can help you start out on your own, or suggest ways in which we can support you.

DrupalCon Dublin – I wasn’t just there for the craic

5 replies to “Collaborative planning of new user experiences for Cityscope”