Bicycles. Canals. Boats. Tulips. Drupal. This year, Amsterdam had a new landmark to identify with. More than 2,300 Drupalistas attended the yearly European conference that gets the Drupal community together for a week to discuss all things Drupal, as well as other cutting edge web technologies and project management methodologies.

Outside DrupalCon – happy we’re definitely in the right place

Among them, a good number of colleagues around the University who made the trip to the capital of Netherlands to attend and engage with other professionals. Since we’re now in the second year of developing EdWeb, the new central University Drupal-based CMS, it was very useful to attend and better understand what the future holds for the University as a Drupal adopter.

DrupalCons are the major Drupal community events held two or three times a year. These are the gathering places for the community of thousands of Drupal users, developers, designers, evaluators, and business people to participate in sessions, talks, code sprints, and social events.

The University of Edinburgh DrupalCon attendees at large in Amsterdam

I asked colleagues who attended the conference to answer 2 questions:

Getting down to business at DrupalCon

Some of the answers are quite technical and some are not, but this showcases the diversity of people attending DrupalCon.

Mairi is a Senior Analyst Developer within IS Applications Division’s Project Services and is a member of the EdWeb CMS development team. She has posted a daily review of DrupalCon using feedback from University colleagues who attended on the IS Applications Development blog.

IS at DrupalCon Amsterdam – Day 1

IS at DrupalCon Amsterdam – Day 2

IS at DrupalCon Amsterdam – Day 3

Tim is a Senior Project and Programme Manager within IS Applications Division’s Project Services, is the University Website Programme’s Programme Manager and the Project Manager for the project to deliver the EdWeb CMS.

Riky has a role of Systems Administrator within IS Applications Division’s Development Services and is the EdWeb CMS system architecture lead.

Andrew is an Applications Support Analyst within IS Applications Division’s Production Management and is a member of the EdWeb CMS development team.

And, finally, my own notes and thoughts…

Drupal association, the driving force behind the community, has set up a YouTube channel where you can watch all sessions from DrupalCon Amsterdam 2014, as well as previous conferences, which I encourage you to visit.

Future DrupalCons will take place, as usual, in the United States, Europe and, for the first time, in South America which signifies the constant expansion of the Drupal community worldwide. As the University has adopted Drupal to power the next generation of the central CMS service, our team will continue to engage with and participate in future events. Exciting times. 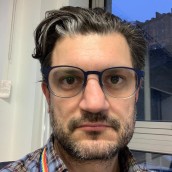