How to grow food from waste

Do you think the fresh fruit and veg you buy at the supermarket is a lifeless ingredient? Think again.

Almost every fresh plant food you buy has the potential to regrow or create new plants, whether that’s from seeds or part of the flesh of the plant.

I’ve taken Lockdown as an opportunity to experiment and see how much life I can coax out of parts of my groceries that might ordinarily end up in the compost.

Disclaimer: I am a hobbyist and do not have a professional background in growing, so this is an accumulation of what I’ve found on blogs and videos all over the internet, and a bit of trial and error.

Why spend time on this?

We waste 62,000 tonnes of vegetables every year. That’s an average of 26kg a year for every household in Scotland – the equivalent of a whole weekly shop. Greener Scotland

The less volume potentially going in the bin, the better.

Food accounts for over a quarter (26%) of global greenhouse gas emissions. Our World in Data

If we can grow some of our food, however little, it means we may need to buy less, meaning less food needs to be grown further up the supply chain, meaning less pressure on land and resources.

Psychological studies have demonstrated the health and wellbeing benefits of placing plants inside. Buildings

I’ve found playing around with plants to be hugely rewarding and almost always boosts my mood.

Now that you’re on board with growing from scraps, let me explain one of the most foolproof methods that anyone can do, even in a tiny Edinburgh flat! 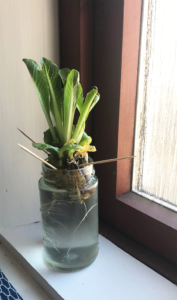 Lettuce regrowing in a jar of water. The result after a few weeks.

Once you’ve chosen the veg, instead of throwing away the base, pop it in your container so it’s partly submerged in the water. You can use toothpicks to prop it up. Don’t worry about the little holes you make.

Now, you can either watch the leaves/stalks as they grow and choose when to eat them directly from the scrap, or if you have access to soil and a pot, you can wait until roots form and plant it and let it get even bigger with the nutrients in the compost (remember to water when the soil dries out). If you can put them outdoors in soil, they’ll be even happier. 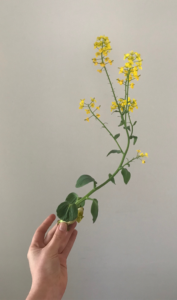 What happened to my greens

Lettuce: I tried planting one in soil once it had developed some roots, and one has stayed in water – they look about the same. I think doing this with the base of lettuce is worthwhile to get a small handful of fresh leaves.

Celery: This has been my biggest success. It was an experiment from before lockdown which started in a jar of water and is now in my garden (although I think it would work just as well in a pot inside). Not only are the stalks edible, but the leaves make a tasty addition to salads.

Pak choi: Almost all of these have ‘bolted’ (developed a long stalk and started to produce flowers). The good news is that pak choi flowers are edible and make salads look pretty. As a general rule, once a plant starts flowering, it puts its energy into its flowers rather than its leaves, so the leaves will be tastier before it starts flowering.

I’m looking forward to seeing if the flowers I don’t nibble on turn into seed pods that I can harvest and plant into soil. Ordinarily, insects would pollinate them, but indoors, you can use a fluffy paintbrush to brush each of the flowers. Be careful not to use on different flowers in the same family (brassica) as it will create a hybrid seed – although it’ll still be edible!

Experiment with other fresh produce scraps

I’ve also tried growing a pineapple from its top, butternut squash from its seeds, potatoes from old spuds, an avocado houseplant from its seed, garlic from a clove, and ginger from a piece of the root – with varying success!

These are only some of the examples of what can be done with grocery scraps – tomatoes are easy to grow from the seeds, as are peppers and chillies, and other fruit seeds. Herb cuttings can be propagated in water. I feel like I’ve barely begun to scratch the surface.

The beauty of experimenting with parts of the plant typically viewed as waste is that any food you get out of it is a bonus – even if it fails, it would have gone in the compost anyway.

Caring for plants does take a bit of time/effort. This is useful for appreciating just how much work goes into growing our food.

Do you have any tips for me? Have you tried to grow anything from a scrap? Would you like to?

Check out the Kings’ Buildings permaculture garden on Facebook if you’re interested in getting involved with growing at the University of Edinburgh on a larger scale.

How to grow food from waste / Social Responsibility and Sustainability by blogadmin is licensed under a Creative Commons Attribution CC BY 3.0 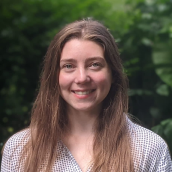 Alumni • Food • Health and wellbeing • Projects you can do • Waste, reuse and recycling

1 reply to “How to grow food from waste”