Andy Arnott, Projects Coordinator (Labs), summarises how biohazard waste was reduced by 40% in a pioneering study by a lab in the University of Edinburgh Roslin Institute.

Researchers in a microbiology lab in the University of Edinburgh’s Roslin Institute (Veterinary) have undertaken a pilot study to find out how they can reduce the amount of plastic waste produced by their lab. The Laboratory of Bacterial Evolution and Pathogenesis is small, with only seven researchers. Given the success of this pilot, it is exciting to consider the potential of these behaviours being adopted by larger labs more widely.

Life sciences laboratories typically use a lot of single-use plastic items to handle and manipulate biological materials. Once used and contaminated, these items need to be disposed of as biohazard waste – unless they can be decontaminated and reused.

Using the waste hierarchy, they have tried to reduce purchases and reuse items. Currently, recycling is not an option at the University of Edinburgh for used lab plastics. However, we are working with our waste contractor, and colleagues from other Higher Education Institutions across Scotland, to investigate if this can change in future.

Impressive savings of materials and money

The work is ongoing, but so far has delivered a reduction of 40% on the weight of materials sent for disposal as biological waste. The team shared promising stats for specific items:

Overall, these savings in terms of the number of plastic items led to a reduction of laboratory waste of 43 kg in a 4-week period (54 vs 97 kg in the 4-week baseline period) (Fig. 3a). This equates to 516 kg of waste per year which is no longer being autoclaved and then incinerated.

The processes adopted by the team required roughly 30 minutes three times per week to empty the decontamination station. It also required the cooperation and support of the Central Services Unit for dishwasher and autoclave use.

Find out more about how to prevent waste in your lab

The researchers looked into two options for sterilising items that had previously been considered ‘single-use’. 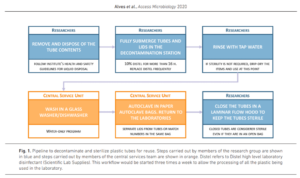 They found that one or both of these methods would produce items that were suitably sterile for a lot of their work. Work that required ‘non-pyrogenic’ conditions (I.e. Absolutely free from bacterial contamination) is still undertaken using non-pyrogenic single-use lab plastics. Similarly, alternatives have not yet been found for non-cytotoxic conditions. This limited the use of the reused items to microbiological procedures and excluded the items from tissue culture procedures. On a larger scale (I.e. building-wide) plastics could be ‘cascaded’ from areas where high levels of sterility were required (e.g. tissue culture) to areas where there is greater tolerance.

Some single-use lab plastic items were found to be robust enough for autoclaving (Falcon tubes), while others melted (universal tubes, petri dishes). For those items which melted, some could be replaced with reusable items made of other materials, such as glass or metal.

The below describes the various ways the group reduced their production of plastic waste.

When used for pipetting common non-sterile solutions (e.g. ethanol, concentrated buffered solutions) they would be sheathed in their plastic wrap, labelled with the working solution that they were used for, and placed in an agreed location for reuse.

Decontaminated overnight in 10% Distel, rinsed with water, dried and reused.

Petri dishes used with media only are decontaminated overnight in 10% Distel, washed and reused for agar media with antibiotics

Of note, we did not observe contamination related to the reuse of chemically decontaminated and autoclaved plastic tubes following the implementation of reuse guidelines, making us confident that the pipeline is appropriate for our research applications.

Note: the inoculation loops require to be sterilised with a flame between samples, which adds a little time to procedures.

In addition, the group looked at the activities they were undertaking and considered opportunities for improvements.

In general: before any protocol step ask: “is there a more sustainable way to do this?”.

The group are continuing to look for ways to improve, including investigating the introduction of glass culture tubes, Petri dishes and stripettes to replace plastic versions. These glass items can be decontaminated by autoclaving and reused without the need for a chemical decontamination station. 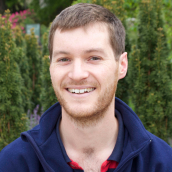 Serve your community by eating Planetary