Professor Elizabeth Bomberg, Politics and International Relations, and member of the University of Edinburgh observer delegation, reports back from Glasgow.

Optimism and pessimism, success and failure, urgency and delay 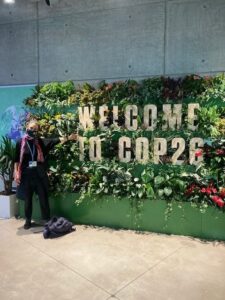 All Conferences of the Parties (COPs) are characterised by a mix of optimism and pessimism, success and failure, urgency and delay. The urgency – scientific, political, economic, moral – for a meaningful outcome from COP 26 in Glasgow is not in doubt; the need for action is overwhelming if we are to hold warming to 1.5 degrees and avert the nastiest consequences of climate change. Hopes and expectations were high in the run-up to this COP with Glasgow pitched as the ‘last, best chance’ to save the planet.

We know from scholarship on international negotiations that the hope and optimism of early days often fade as negotiators tire, national leaders’ speeches fail to deliver major breakthroughs, and protesters become increasingly angry at the lack of a clear leader response. Concurrently and symbolically the glamour of the host’s premise can lose its sheen as banners fade and tatter, queues lengthen, traffic stalls, bins overflow.

Fiddling while the planet burns? COP25 in perspective

The banner falling out on the first day of #COP26

Glasgow bin collectors and street cleaners to strike during Cop26

As I write this on Day 3 of COP26, following the two-day world leaders summit, the pessimism of achieving any breakthrough is growing (and that is even before the contentious, tricky question of climate finance is discussed). This pessimism is not without merit – leaders from key emitter states (Brazil, China, Russia) are absent; others have failed to make meaningful national pledges for emission reduction; many speeches remain fluff. A major overall breakthrough seems distant.

The World Leaders Summit at COP 26

Yet we need to be particularly careful when assessing COP success and failure this year. Unlike previous COPs, the aim of the Glasgow COP is not to agree on a new treaty but rather to strengthen and deliver promises already made, especially in the UN’s 2015 Paris Agreement (‘Paris promised, Glasgow delivers’).

That means a Glasgow outcome – even a ‘successful’ one – will be inevitably piecemeal, comprising a series of important but smaller scale announcements and initiatives (on deforestation or methane) rather than a major breakthrough as seen in the Paris Agreement. This sort of piecemeal success is not nearly as satisfying, and certainly not as amenable to the media imperatives of drama, certainty and clear outcomes.

Historic methane pledge on the agenda

Who speaks for climate? Making sense of media reporting on climate change

Secondly – and more importantly – this traditional conception of success depends far too heavily on what world leaders agree. Of course, what leaders agree (or not) is of fundamental importance. But to evaluate ‘success’ entirely on leader agreements or plenary sessions is too narrow. Doing so ignores what is actually happening within and below the state, and by non-state actors. Success more broadly construed can be seen everywhere at this COP. 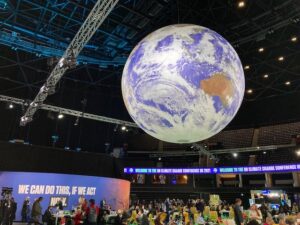 If you’re searching for climate hope in the Blue Zone (where formal plenary sessions, delegations and side events are held) visit the UNFCCC Innovation Hub pavilion to see what firms are already doing and will continue to do, regardless of what leaders agree in the neighbouring plenary sessions; stop by the Pathways to 1.5 pavilion for a series of panels and find out what city, sub-state leaders from North America, Europe, Africa and Asia have done and will carry on doing.

Binding global agreements and adequate funding would make their job much easier and more effective. But they will continue regardless. 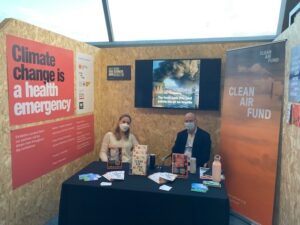 Next, leave the COP’s Blue Zone entirely and venture into the Green Zone – the forum for the public, civil society and citizens groups. Here the foundation for success and hope is seen in abundance – in the 100s of workshops and exhibits highlighting the actions of faith leaders coming together to form alliances to mobilise action; in the stunning work of artists communicating in ways words cannot.

Or check out the plethora of organisations linking climate to health, gender equality and justice, pulling in wider constituencies, and underlining the intersecting nature of climate. Most powerfully this year: track the action of youth groups, legitimately furious at the inaction of older generations, and channelling that into positive ideas, knowledge, energy.

Cop26: six eco works popping up in Glasgow (and beyond) for the UN Climate Change Conference

The Women and Gender Constituency

Finally, look beyond the COP premises to the wider city and climate fringe. Citizen mobilization (and I write this before the massive Day of Global Action event planned for 6 November) is sparked by anger and impatience at climate injustice and leaders’ inadequacy – but it is also the root of hope, grassroots change and future success.

Identify success and galvanise it

So whatever the official outcome of this Conference of the Parties, including an inadequate formal outcome, the trick is not to succumb to the narrative of ‘COP failure’ and the despair that can bring. Climate despair is one the most dangerous obstacles to climate action and future success; we know it can stymie action and make progress less, not more, likely. So let us watch, scrutinise and pressure global leaders. But we needn’t measure success just by what they do. Look around, identify success and galvanise it for immediate and future climate action.

COP 26: Looking for success in all the wrong places? / Social Responsibility and Sustainability by blogadmin is licensed under a Creative Commons Attribution CC BY 3.0

The carbon impact of homeworking