Our Voices of the Planet series highlights the real-life impacts of the climate crisis on our University community, focusing on those from the Global South. In this entry, we hear from Irvin Romero, an MSc Language Education student from El Salvador on the recent extreme weather events that are devastating his home country.

As I kid, I remember singing very loudly a popular Spanish rhyme, “Que llueva, que llueva” (Let it rain, let it rain), with which I was hoping it would start raining so that I could go out and get wet in the rain. However, as I grew up,  the rain became more intense and represented a real source of fear and worry for many families in El Salvador.

El Salvador has shown a steady increase in the frequency and intensity of storms and floods over the last few decades. In the 80s, five hurricanes were reported in the Central American region and, nine during the 90s. This number significantly increased during 2000-2009, as 39 hurricanes were reported (U.S. Agency for International Development [USAID], 2017). The effects of climate change are evident not only in the economy, as infrastructure and roads are damaged, but also in people’s lives. In 2009, El Salvador was the most affected country by extreme climatic events in the world, taking the lives of around 150 people as Hurricane Ida struck the country (Harmeling, 2011). 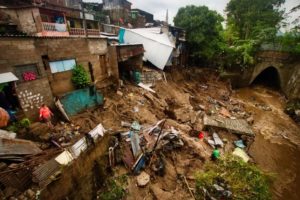 Unfortunately, the situation appears to be getting worse. In the middle of Covid-19, El Salvador was recently struck by Tropical Storm Amanda, which, in only four days, had caused 27 deaths and had affected more than 24,000 families (Office for the Coordination of Humanitarian Affairs [OCHA], 2020a). As a result, all social-distancing measures were broken, as heavy rains had made rivers overflow, causing floods and landslides that swept away the houses of thousands of families, who had to be placed in local schools which served as shelters. As if this were not enough, without recovering from the damages caused by Amanda, tropical storm Cristobal struck the country increasing the number of deaths to 30 and of affected families to almost 30,000 (OCHA, 2020b). Both storms produced damages that go above 8M USD (6.5M GBP) in infrastructure and more than 22.1M USD (18M GBP) in agriculture, risking the food security of more than a hundred thousand families (World Food Program [WFP] El Salvador, 2020).

Being struck by two storms, one after another, is an unprecedented event, which came at the worst time. Despite the damages caused, it seems to me there is a lack of ecological awareness. The news appears to report the situation; however, insufficient attention has been paid to the real cause of frequent and intense storms. A high rate of deforestation, inappropriate agricultural practices, and a culture of littering is a reality, which does not seem to contribute to improving the situation in El Salvador. Many environmental organisations are working hard to enhance the environmental situation of the country; however, more awareness of these issues and its consequences must be promoted at a local, national, international, and worldwide level if we want changes to be seen.

Explore the rest of our Voices of the Planet series

Voices of the Planet: Irvin Romero, El Salvador / Social Responsibility and Sustainability by blogadmin is licensed under a Creative Commons Attribution CC BY 3.0

The future of fashion: an interview with Pauline Op de Beeck

2020: The summer of staycations