Sonia Mullineux, Head of Alumni Communication, explores how Covid-19 has changed her relationship with cycling and the distinction between cycling as an activity and as a state of mind.

We are picking up a new bike for my son on Saturday. He is three and a half and has spent the last year mastering his balance bike. Our daily exercise during lockdown has largely been spent cycling around our local streets. As his confidence has grown, so has his desire for pedals and now we are ready. The first bike is a milestone. A moment to be captured and celebrated.

I remember my first bike. It was a green Raleigh with white stabilisers, bought by my parents from Brookes bicycle shop on Liverpool Road, Eccles. Doreen Brooks sold bikes for 52 years before her retirement in 2011. Three generations of the same families probably bought their first bikes from Doreen.

I remember feeling proud. Proud that my parents trusted me with something that was clearly more than a toy. Every gift before the bike felt childlike in comparison. This was clearly significant, game-changing, a route to the future. Each subsequent bike was an event. Recurring patterns that became a kind of ceremony. The bow on the frame, the first wobble along the pavement outside our house, the photo for the family album. A single photo has been replaced by smartphone videos and 100 digital images but the ritual of the bike remains. If a film or television programme wants a shorthand moment for coming of age; nothing encapsulates the sentiment better than a child attempting to master a bike. 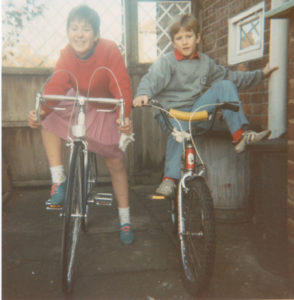 Sonia: “Every gift before [my first] bike felt childlike in comparison.”

Given the reverence that the bike is held in childhood, I have always struggled to understand when this vanishes. When does the bike go from treasured moment to traffic hindrance; from the source of family pride that transcends class, gender and race to a niche activity beloved of the middle-aged man in lycra, known as the “MAMIL”?

Walking out of the house and just getting on my bike is a simple and life-affirming act.

Maybe it is about what we think cycling is as an adult?

I’m not sure that what cycling is to me really fits with the dominant narratives. Over the past 20 years, cycling has largely been presented in two ways. Either it is an environmental transport thing: the ultimate in sustainable travel and as such often positioned in opposition to the car. Those who don’t see themselves as part of the sustainable travel conversation have become hostile to the bike. Under the line comments become heated, aggressive and confrontational and this is carried onto our roads. Cyclists are defined as other. The outliers rather than the norm.

The second way that cycling is presented and understood is as a fitness thing. The lycra contingent on expensive road bikes with strange overshoes and serious demeanours. This version of cycling is that of sweat, effort, challenge and achievement. A local bike shop in Edinburgh that stopped trading prior to Covid-19 was aligned closely with this version of cycling. A friendly and helpful place once you braved the gloss and pushed past the professional cyclist imagery and beautiful but unattainable examples of precision engineering. Here was another version of a cyclist as other but one that felt exclusive and separate. 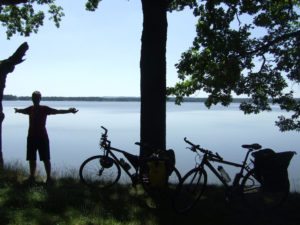 There is absolutely nothing wrong with these two versions of cycling but neither matched my own relationship with the bike. Urban commuter, road racer, trail rider, fixie devotee. Lots of labels but still nothing that really captures what cycling is to me. I think it is mostly about purpose – or to be more exact – a lack of purpose.

The joy that I first experienced in childhood was about the freedom and possibilities that the bike offered. I didn’t want to get fit, change the world or make a fashion statement. I didn’t even want to go anywhere. Not anywhere specific. When cycling makes sense to me it is a kind of wandering. Travelling without a fixed agenda. Mildly aware of the rotation of the pedals but not pushing, just moving forward. I like that you can surprise yourself by ending up miles away from where you started. I once accidentally cycled to Liverpool. Equally, there is something uniquely comforting about the familiar turns you take to arrive home.

My best ideas also come to me when I am on the bike. It is as if the concentration that you need to cycle kickstarts something in the brain. A perfect combination of structure and freedom. Space to think but not to aimlessly daydream.

At various points in life, I have been drawn into cycling as an activity or a statement. I have bought technical clothing and complicated bags. I have felt smug about my travel choices and battled traffic with obstinate determination, muttering expletives and entertaining dark thoughts. However, recent events have taken me back to the beginning and renewed my belief that cycling is at its best when it doesn’t really have an agenda and isn’t about anything. I have seen new cyclists exploring our local streets. Families in convoy. Couples side by side. Older people circling the neighbourhood.

Walking out of the house and just getting on my bike is a simple and life-affirming act. As urban life reconnects with itself I am holding on to this. I want to share my son’s joy in his first bike. A milestone for him and a rediscovery for me. Destination unknown.

Find out more about support for cycling at the University

Explore our other blogs on travel

Write a blog for The Seed

Rediscovering cycling: destination unknown / Social Responsibility and Sustainability by blogadmin is licensed under a Creative Commons Attribution CC BY 3.0

2020: The summer of staycations

MedAID: An innovative, student-led society paving the way towards sustainability in healthcare