Everybody counts – How a single person can make a difference

Luise Schroter, a postgraduate student from the School of Law, tells us about how the Supply Chain Justice student group grew from a vague idea into a strong force for positive change in a short space of time. 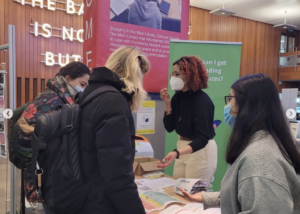 It doesn’t take a lot to change the world

I started with a conversation about the issue of human rights violations in corporate supply chains.

In the chocolate industry alone there are 1.56 million children forced to work on cocoa farms

95% of the children are involved in hazardous work. As consumers, all of us contribute to the problem by continuing to purchase from brands that heighten the issue, for example by pushing cocoa prices down. 76% of UK inhabitants eat chocolate at least once a week. So if I start a conversation, and I get just one person to become conscious enough to change their consumption patterns towards more ethical brands, that will already impact the lives of those farmers that rely on that ethical brand. It will give them a livelihood where they don’t have to rely on children to save costs.

However, after having that one conversation, I simply did not stop. I organised one of the weekly meetings of Amnesty International and talked about the issue of human rights violations in corporate supply chains with the aim to create a working group. This brings me to the second point.

You are not alone in wanting to change the world

We underestimate how many other people also want to change the world. However, there are so many issues and global problems that it can be overwhelming to find a starting point and a specific cause to rally behind. When I organised the Amnesty International Meeting back in November, I hoped to get maybe two or three other dedicated students seeking to make a difference. I got six. We started with nothing, not even an industry to focus on.

Now, just four months later, we are 15 students, have a website, an Instagram account, have already run a campaign and are professionally organised to run more. When a single person can already make a difference, a group of people can make a change.

What did we achieve so far?

Could I have done this alone? Certainly not. I had the most amazing team which made all of this possible. A team, whose members I mostly didn’t even know back in November. So, the next time somebody tells you, that a single person doesn’t matter, tell them this:

A single person can already make a world of a difference by doing one small action and a single person doesn’t stay single for long in fighting for a good cause.

Pacari Chocolate Ranked The Most Ethical Chocolate in the UK

Everybody counts – How a single person can make a difference / Social Responsibility and Sustainability by blogadmin is licensed under a Creative Commons Attribution CC BY 3.0

How to tackle anxiety with the help of nature