Brian McTeir shares progress from Easter Bush’s transition from bottled water to water fountains, and the strategy to reduce the number of cups used at the fountains. 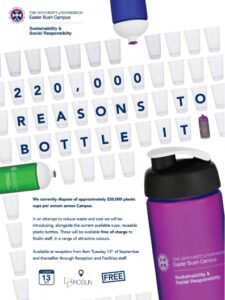 As part of the ongoing Sustainability reviews and identification of initiatives, it was highlighted from the Easter Bush Facilities budgets that the provision of water to Staff and Students over the last 12 months we had made a significant reduction in costs with the installation of filtered water stations rather than the bottled water suppliers. This had made a 60% reduction in costs over and above reduction of transportation with water deliveries. What the review also uncovered was a growing use and cost in plastic disposable cups, however.

To the right is the poster which was used at the launch of this new initiative.

Reducing the number of cups

From the review, it was costed that the Campus was using in the region of £8-10 K in cups (220,000) plus maintenance. The maintenance cost which includes regular cleaning had to be retained and some cups would still need to be made available for visitors. It was clear that the next challenge was to reduce the number of cups which would reduce environmental impact.

A meeting was held with the supplier in 2015 to identify if there were any alternatives to the cups in use. This prompted us to move to a cup that was biodegradable at six months when put to landfill. Continuing to make good progress prompted us to consider alternative methods to reduce plastic usage.  The idea came about to give staff and students where possible reusable cups or bottles.

The project was proposed at the local sustainability Committee meeting, which approved the following idea presented.

‘In an attempt to reduce the amount of plastic cups, reusable cups would be identified fit for purpose , purchased and distributed to staff and students for free.’

Different types of cups were trialled for ease of use and we kept in mind hygiene requirements for filling these cups. This exercise identified that bottles were seen as the choice over cups and different tops of bottles were then trialled for ease of use and again hygiene. The cups then underwent a branding exercise for the Campus, to establish buy in by staff and students. It was also agreed that in communal areas a certain amount of the cups would be retained for visitors and those who perhaps had forgotten their bottles.

A day was chosen for the handout and advertised locally through poster board and intranet screening.

The initial results have shown that we have reduced in the month of September 2016 a reduction from 13 boxes of cups (250 per box) down to three and at this stage the RSDVS School has still to be targeted. The figures for October gave a usage of four boxes for the month (the increase identified to two International conferences held through that month).

This should deliver an overall reduction in the use of plastic cups by 75%.

Easter Bush water bottle project / Social Responsibility and Sustainability by blogadmin is licensed under a Creative Commons Attribution CC BY 3.0

The stadium is on fire: The impact of climate change on field sports

Paper crafts and penguins: my summer internship at Edinburgh Zoo