The EcoBrick project with the Centre for Dementia Prevention

For their 2019 gold project, the Centre for Dementia Prevention Awards office team worked to create ‘EcoBricks’ to raise awareness of single-use plastic consumption and reduce the volume of waste reaching landfill. 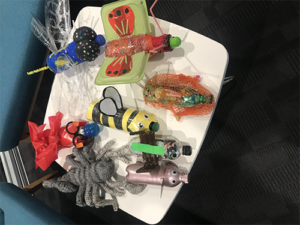 An EcoBrick is a reused plastic bottle which is filled with single-use plastic or otherwise non-recyclable material containing plastics that would be otherwise sent to landfill or incineration. Plastic is cleaned and dried, then shredded and tightly stuffed into the plastic bottle. The EcoBrick can be logged on an online platform before being used in construction or art.

The team began collecting materials for the EcoBricks in April 2019, removing all but one general waste bin from the Centre and creating an ‘eco bin’ for single use plastics. As the EcoBrick materials were collected, they were washed and dried and stored ready to be packed into bottles.

The Centre for Dementia Prevention team had various ways to motivate staff to take part, and created an assembly line in order to efficiently build the EcoBricks in groups as part of their ‘EcoBrick parties’. They also introduced a “star of the week” to reward those who contributed.

By November 2019, the Centre for Dementia Prevention had created 32 EcoBricks or 8.78kg of non-recyclable waste was diverted from the waste stream, the equivalent of approximately 35 of the University’s general waste bins. This also equated to 26.73kg of CO2 sequestered from the atmosphere.

A feedback survey showed 89% of staff from the Centre participated in the scheme in some regard, with all reporting awareness of the project. Many participants reported their behaviour had changed some way and had become far more conscious of using single use plastics.

52% of staff increased recycling at home, and 67% actively bought less single-use plastics in the duration of the project. Only one person (4%) indicated that the project made no difference to their recycling/plastic consumption habits. However, this person was already an active recycler and EcoBricker!

Find out more about the Sustainability Awards

Find out more about our #ZeroWasteUoE campaign

The EcoBrick project with the Centre for Dementia Prevention / Social Responsibility and Sustainability by blogadmin is licensed under a Creative Commons Attribution CC BY 3.0

Stationery recycling with the Centre for Open Learning