Carolina Macedo investigates why most gyms are not investing in energy harvesting exercise equipment as part of her MSc Sustainable Resource Management dissertation.

On a typical term time day at 6pm I found myself competing with other users at the Pleasance gym to use a cross trainer. Every piece of equipment was being used and the cardio floor looked like a factory floor, where high-speed systematic motions were working in the production of energy. Then it hit me, what if we could use the energy produced from human exercise and convert it into usable electric energy. I went home that night and researched if such technology existed and if it was commercially available.

Turns out that over the past decade, scientists and engineers have been designing energy harvesting technology that captures, converts and stores small quantities of energy from a variety of naturally occurring energy sources; one of them being from kinetic energy produced from human exercise. In fact, a handful of gym equipment manufacturers (including the manufacturer the Pleasance gym bought equipment from) offer different retrofitted exercise equipment such as spin bikes and elliptical machines, to harness kinetic energy produced from human exercise and convert it into usable electricity. So why were gyms, like the Pleasance gym who was already taking energy efficiency measures and had a relationship with a potential supplier, not investing in this technology?

After further research, I found that retrofitted bicycles with energy harvesting systems were being used for educational, corporate and entertainment events to power movie screenings, smoothie makers and charge phones. Similar technology was also being used in energy-deprived situations to power light bulbs, blend grains and cereals, and in post-hurricane sites for people to charge their phones. So I decided to evaluate the costs and benefits of retrofitting stationary bicycles with energy harvesting systems in the context of a gym, home, leisure centre and energy deprived situation. Questionnaires were first conducted to capture the relevant social and environmental benefits and costs that were neither easily quantifiable, measured or equated with a monetary valuation. Then an economic feasibility study was carried out to investigate if adopting this technology in each setting was financially cost-beneficial.

For the gym, leisure centre and home context it was concluded that this energy source does not generate substantial amounts of electricity or cost savings in electricity bills to be considered by users and gyms. Students did not show greater interest and support for replacing regular cardio equipment for more environmentally friendly ones. Also, participants were not aware of how this technology could contribute to reducing our environmental impact. The energy deprived situation questionnaire was answered by volunteers involved in Syrian refugee camps in Greece and Jordan. It was concluded that this technology would not be suitable in the Jordan camp due to safety issues and the physical infrastructure of the camp, but in Greek camps, it would be suitable mainly for entertainment purposes such as film screenings (as long as the funds were available). 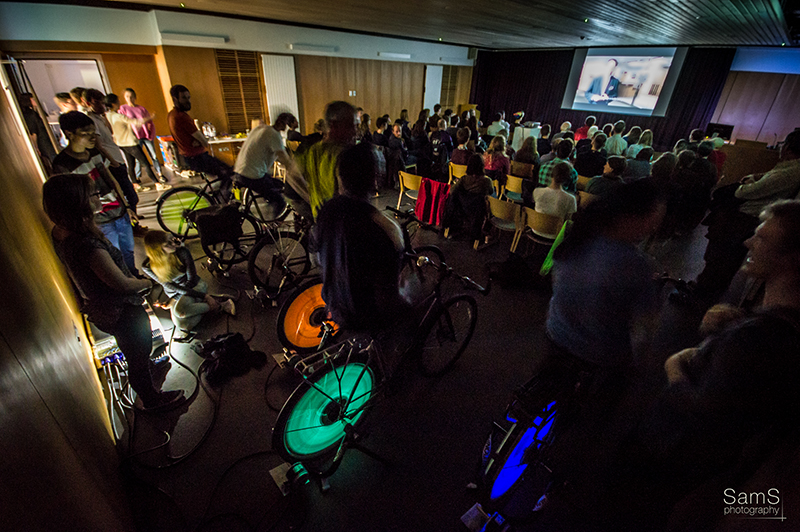 I realised that the opportunity costs of this technology are not a monetary cost, but a lost long-lasting additional benefit of educating people on energy consciousness, changing people’s attitudes on energy consumption in energy-intensive societies and an opportunity for making the living conditions of people in energy-deprived situations more bearable. If suppliers of energy harvesting cardio equipment increase consumer awareness of their products and fitness facility users showed greater interest in them, this would drive manufacturers to improve the efficiency and reduce the high costs of retrofitted stationary bicycles. This, in turn, would yield greater financial, social and environmental benefits.

Pros and cons of energy harvesting exercise equipment / Social Responsibility and Sustainability by blogadmin is licensed under a Creative Commons Attribution CC BY 3.0

A smarter future for flat-sharing and energy is here

3 replies to “Pros and cons of energy harvesting exercise equipment”