Associate Chaplain Ali Newell reflects on recent interfaith efforts to highlight sustainability and equality for all within the context of the refugee crisis, Paris Attacks, and Scotland’s Climate March.

As part of Scottish Interfaith Week which took place from 22nd – 29th November, the Chaplaincy joined with EIFA (Edinburgh Interfaith Association) to offer the event ‘Our Faiths Honor the Earth’ as part of the week’s general theme of ‘Care for the Environment’. At an event in the chaplaincy, nine faiths presented their faith statement of 150 words on why their community cares about environmental sustainability.

The eco-congregation baton which had been making its way across Scotland around faith communities with the words ‘Time for climate justice’ was passed from faith representative to the next faith representative and then made its way to the December Paris climate summit. 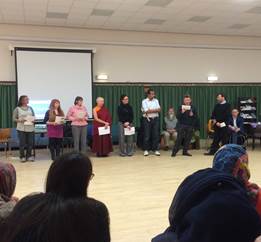 Our Faiths Honor the Earth event

At the event, Muslim art student Adam Hussein composed and performed a  dance/poem piece celebrating the sacredness of the earth accompanied by staff member Bashir Saade from Lebanon on the Nye and Imal Malek on the drum. Rosa Murray, a Development Officer at the School of Education, spoke on her work connected to education and sustainability, and we enjoyed poetry, and singing by PhD student Maggie Creed and dancing before sharing a meal.

In the run up to the climate justice march the Chaplaincy hosted an exhibition of artwork from Dalry and Niddrie Mill Primary Schools on the theme of Care for the Environment organised by EIFA.

At the faith leaders meeting during interfaith week, a number of commitments were agreed as ways of working together across the faiths on environmental issues.

Before the climate justice march at the end of Interfaith week there was a service in the St Albert’s Catholic Chaplaincy  chapel, George Square. The garden chapel was full to overflowing.  200 people streamed out to join the others gathering in the meadows for the climate justice march. Trevor Jamieson of the eco-congregation Scotland network shaped the service and the writer and environmental activist Alistair Macintosh offered the reflection.

After the Paris attacks, the Chaplaincy collaborated with the International office to lead a peace vigil in front of the main library.

Peace vigil outside the Main Library

The Principal was present with representatives from the French consulate, Euan Fergusson of  the International 0ffice and the Chaplaincy. Harriet Harris, the University Chaplain opened the vigil and Sohaib Saaed, our Honorary Muslim Chaplain spoke.

The Chaplaincy met weekly with Amnesty International, Save the Children and STAR to look at the refugee crisis and see what could be done together. Save the Children put up an exhibition on refugees in the Chaplaincy auditorium, Lucy Bardwell Jordan from the Catholic Chaplaincy and Liz Marsh  from SCM organised a multi-faith refugee service and all the groups  took part in a refugee vigil in Nicholson Square after the service.  Amnesty International organised a ceilidh in Teviot to raise money for the crisis.

The Chaplaincy led the annual University carol service in St Giles Cathedral. There were 1500 people there with many students sitting on the floor of the packed cathedral. We wove in the theme of the refugees to the Christmas message and the collection of £2000 will be given to Save the Children for their Refugee appeal. 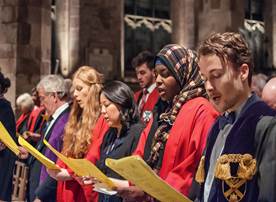 The Hearty Café (the society which promotes locally grown fairtrade food) and serves fresh homemade soup every Monday made in the Chaplaincy kitchen will start up again in January. All are welcome to come and taste their delicious offerings!

A Happy Christmas to you all, 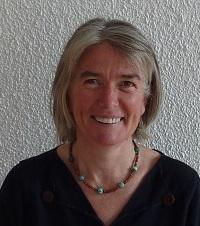