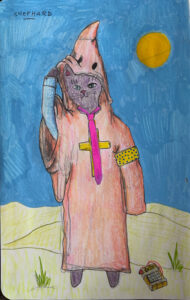 Shephard is a black/lavender/espresso Feline that is always under-cover (in this case as a KKK operative in the 1960s USA, Georgia). Spy, saboteur, infiltrator, informant. Strikes when most effective, biding his time in apparent apathy. Wears Hermès ties and has 3 Burkin bags (he buys one about every 10 years). Extortion and blackmail are common for Shephard. Old rivalry with Yves. Shepard often wears a C4 explosive vest underneath his clothes: if he is found out or if the situation turns sour he will detonate it (and himself). As he is immortal (as all Felines are) he will eventually recover to his near-original state.

Shephard / The Feline World by blogadmin is licensed under a Creative Commons Attribution CC BY 3.0
Posted on 13th September 2020