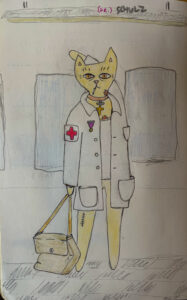 Opiate addict. Stern and anal about his doses: one in the morning and one in the evening. One of those doctors who smokes (Marlboro menthols). Survived multiple gunshot wounds to chest and neck. Serves as primary physician to all Felines of Olympus. Much disliked, but needed. “Protestant”. There are two medical facilities he oversees and travels in-between: the medical institute in center Olympus in the mountains, and the other being on the outskirt plains. The plains station is discreet and shabbier, providing quick cures and surgeries more off the grid. The center station is state-of-the-art and pristine.. and sterile. Less casual than “The Shack” as Schulz calls the perimeter medical station. Although Schulz must spend more time at the central medical institute he much prefers the relaxed atmosphere of at the Shack where his expectations are lower and his proclivities towards drug use/abuse are less frowned upon. Performed his own ACL surgery. Doesn’t carry a weapon (Socratic Oath) but is adept with with a scalpel in more ways than one. Has performed several brain operations of Luz, but certainly not all of them.

(DR.) Schulz / The Feline World by blogadmin is licensed under a Creative Commons Attribution CC BY 3.0
Posted on 13th September 2020