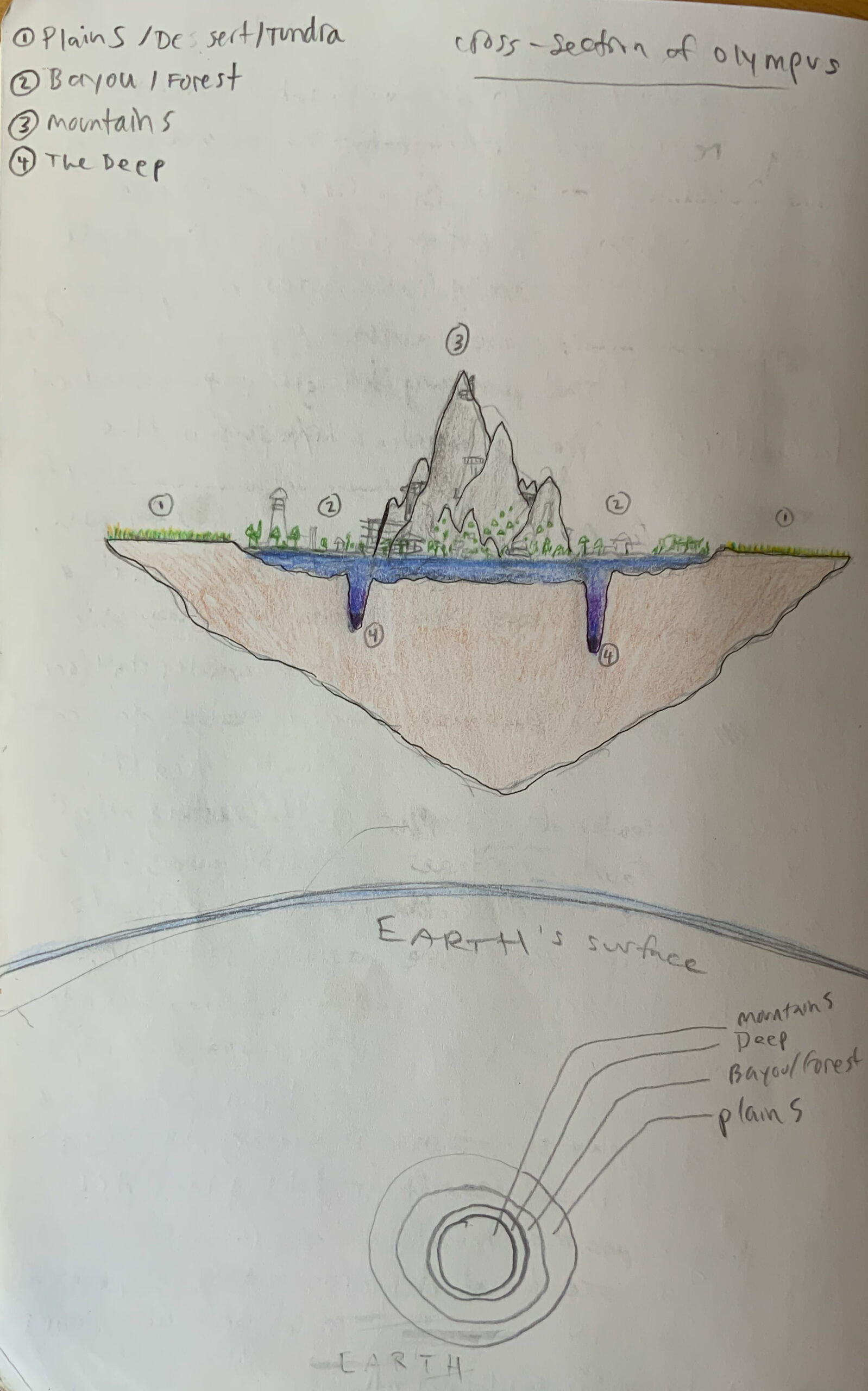 1) Plains/Desert/Tundra: Flatlands where no one lives and borders the edge of Olympus (the descent to earth). Many Felines go here to meditate, fight, or depart to earth. Few, if any, Felines live out here. Although Felines rarely live with one another, they do like living nearby one another.
2) Bayou/Forest: The primary residential zone for the Felines. A cross between Martha’s Vineyard, the Florida swamps, Venice, and a Californian redwood forest. Large trees with Spanish Moss, Japanese Pines, Redwoods, Palm trees. An abundance of (mostly) carefully curated Flora that suits each Feline’s taste. Most Felines travel across this region by jet or prop plane, because water is feared by most Felines (for good reason in the current age).
3) The Deep: Next to nothing is known about the deep. Felines fear it to the point that they do not speak about it, unless they are speaking of avoiding it. Most accidental entropizations occur here. Felines can swim, but most loathe to do so, BUT it is said that felines have been dragged into the deep by unknown forces after they had fallen in. Felines are incredibly brave by nature so it is shameful to even mention this place or these happenings. Mabel is one of the few felines to be interested in this area, and is doing field research into it.
4) Mountains: The center of Olympus. Large Mountains similar to Nepal but also the ranges of Bilbao, Spain. Tallest Mountain is high as Olympus Mons on Mars. Few Felines live here as it is cold and windy. The central medical center is located here, as well as the observatory/astrology center, the space launch site, and the natural steam springs where the “Judges’ Seat” is located. Aged, long-lived felines live up high in the mountains, having to bear the cold and low oxygen, but they rarely come down and therefore little is known about them. The mountain is generally non-residential, although some Felines (like Francis) live in the border region between here and the the bayou/forest.

Olympus 1 / The Feline World by blogadmin is licensed under a Creative Commons Attribution CC BY 3.0
Posted on 13th September 202023rd September 2020