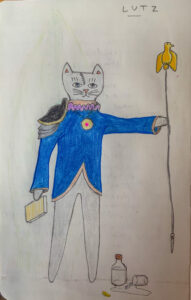 JUDGE
Arbitrary defender of the rich and famous (but not necessarily the powerful). Has an annual brain surgery scheduled every year on Christmas Eve (Xmas being his favorite holiday) to stay with the times. Presided over the legal defense and judgement of O.J. Simpson. His beginnings somewhat mirror that of the youngest Kennedy daughter, having received a pre-frontal lobotomy when little. He had his pre-frontal lobe re-inserted some time later. Wears a U.S. Medal of Honor, but doesn’t know how or why he cam to attain it. Drinks small batch gin with soda and lemon. Always is spilling his drink. Avoids violence, and only plays invisible voyeur to cases of human violence. On Olympus, he has two adept guards to protect him: Xharro (lead guard), and Ochre (apprentice guard). Does have a dues-ex-machina like ability to defuse imminent human/Feline conflict- this ability seems related to the bird staff he carries whenever he is out on Olympus or on Earth. A general note on judges is that they are extremely rare and have many vital responsibilities in Feline society. Flies around in a two-occupant helicopter: has others fly when possible as he is often drunk and/or loopy from surgery and liable to crash (which happens frequently). Tall severed at the base at an unknown time.

Lutz / The Feline World by blogadmin is licensed under a Creative Commons Attribution CC BY 3.0
Posted on 13th September 2020