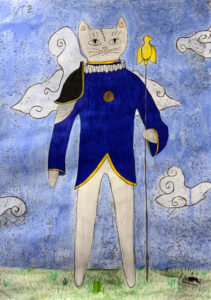 Judges are the most powerful and influential Felines. Very few are affiliated with the High Fashion brands, although the brands are constantly trying to get these Judges to join their respective fashion house. Reaper joined Versace after making a deal with Gianni Versace himself, but he is one of the few judges to affiliate/cooperate with the brands. The judges convene, rarely, at Judges’ Seat in the mountains of Olympus. They, communally, are able to “birth” new felines from the scattered Matter of entropized Felines. This is not the Judges only job, but it is an important one. In the current age, communions of the Judges are rare and thus there have been no recent birthings. Almost all judges have guards to fend of other Felines who, by killing a judge, could possibly be elected to take their place as a Judge or at the very least be held in higher esteem around Olympus. Judges almost all have unique magical powers, such as Versace Reaper’s ability to appear wherever he wants on command or Lutz’s ability to both quell and instigate violence amongst humans (and to a lesser degree, Felines). Felines are not born Judges, they must be elected by the communion at Judges’ Seat. Judges tend to spend much more time on Earth, amongst humans, meddling or merely observing. It is worth noting that Felines are for the most part invisible to humans, so their intrusion into human society goes almost entirely unnoticed.