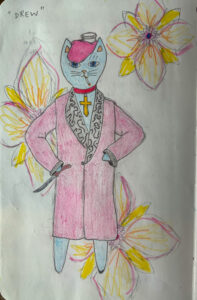 Playboy-Virgin, “Drew” (real anime unknown) is a serial killer of humans. Selects victims at random, but they have to be a able to be sexually seduced. Has killed all sorts of creatures- if it can be seduced by him he will kill it. Loves Benson & Hedges cigarettes, smoking them constantly. Because of his smoking, he is often asked to leave museums and restaurants (depending upon what dimension/timeline he’s occupying at the time). In one reality he seduces and kills Hugh Hefner, and he is seen here wearing his trademark smoking jacket. Suffers headaches so regularly (possibly from frequent dimensional travel) that he always keeps an ice bag on top of his head. Loves flowers, particularly lilies. Uses a 6 inch Lagouile knife. Infatuated by Catholicism, with its innumerable saints and powerful, (mostly) sexless popes. Solid gold cross from unknown area/time (probably Italy, during the time of the papal kingdoms). The cross has a point at the bottom in case his blade fails him, or he’s feeling romantic. LONER- doesn’t spend much time with other Felines on Olympus- prefers human company.

Drew / The Feline World by blogadmin is licensed under a Creative Commons Attribution CC BY 3.0
Posted on 13th September 2020