In 2020, places like California, Australia and Brazil were devastated by increasingly catastrophic wildfires, causing harm to both people and the planet. Years of fire suppression combined with a changing climate is likely increasing the intensity and severity of these fires. Even places where you may not suspect wildfires to be a problem, like Scotland, are seeing an increase in fire events.

Being able to prepare for future wildfires relies on understanding the complexities of wildfire itself. Zakary Campbell-Lochrie, a PhD student in the Edinburgh Fire Research Centre, is doing just that. In the following Q&A, he discusses his research and its implications for managing future fire risks.

Can you tell us a little about your research on wildfires? 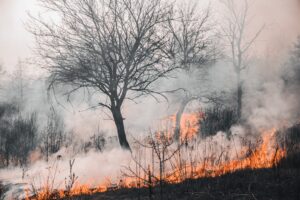 Wildfires have been a problem for a while. But they are also not just a problem, there are sometimes benefits to wildfires, for example, they can perform an important ecological role, which has led to changes in our approaches to wildfire management. In the past, the focus was often on just trying to suppress every fire, and over the intervening decades, we’ve seen a build-up of fuels or plant matter which can burn causing fires to spread. This, in addition to climate change, has led to more intense wildfires in some areas.

Where my research comes in, is on our ability to model these fires and understand how they’re going to spread and how well we can predict that spread. This research is helpful for when we want to do prescribed burning, which is a controlled and closely monitored fire, to either reduce the fuel load or for ecological or economic reasons, like what is done in Scotland to manage grouse habitat. In those cases, you want to have a good idea of what the fire is going to do. You may even need to actually show a research body or government your plans ahead of time and support that with evidence, which is where modelling can really come into its own.

At Edinburgh, we do a lot of experimental and theoretical work to improve those modelling tools by working to understand the physics that drives the wildfires.

Recently, we’ve been focused on the role of the fuel structure and how that affects things like fire intensity and spread. What we look at can be on a small level, like the kind of leaf that burns. For example, broad leaves can burn quite differently from something thin, like a pine needle. On a larger scale, you also have different fuel types, like shrubs and trees. To really develop effective modelling tools we need to understand all these different spatial scales and their impact on how a fire will behave.

One way we do this is by burning natural fuels in our fire lab, here in Edinburgh. We’ll repeatedly conduct burns, systematically changing variables to observe the effect on fire behaviour. I’ve also worked on large scale experiments, particularly in the US, to look at other phenomena, like the impact of different firebrands, which are bits of burning fuel that can be lofted long distances by the wind and are another way in which a fire can spread.

How did you get interested in this topic and why did you choose to study at the University of Edinburgh?

I became interested in wildfires kind of by accident. I did my undergraduate degree in mechanical engineering at Edinburgh, so it wasn’t necessarily an obvious path to this.

That’s one of the things I like about researching wildfires; it is multidisciplinary, and you have so many people from different academic backgrounds, and different backgrounds generally. There are biologists, ecologists, foresters, as well as a huge base of knowledge from indigenous peoples. The research brings together all these different groups of people to work together on these problems.

I did my master’s degree at the University too, and my final project was on fire. That was really my first introduction to the world of fire and the roles that engineers and physicists can play. I just got hooked.

Also, the University of Edinburgh is really well regarded as it does a lot of work in the area of fire engineering research, both within wildfires and in the context of building fires. It’s a real centre for that kind of work and a good place to be able to work with people across this area as well.

What impact do you hope to see your research making beyond academia?

The UN’s Sustainable Development GoalsIn terms of my own personal research, I think the impacts are quite transferrable because it focuses more on the fundamental physics of wildfires.  While we’re using a specific fuel type that might be local, by really drilling down into the physics to understand the relationships between the physical parameters of the fuel, the shape of fuel loads, and how fire behaves, we will hopefully be able to apply our findings beyond a specific location.

As a team, our research group is also working locally here in Scotland. Unlike California or Australia, we don’t have the same sort of history with catastrophic wildfires here. This year we’re already seeing wildfires of a decent size in Scotland, but it’s not something that most people think about in their daily lives. However, with changes in climate, there’s work underway within Scotland and the UK to create fire danger indices and understand these risks. 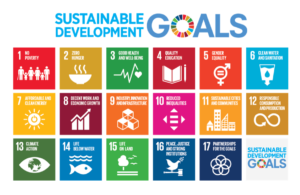 Our research also has implications for the UN’s Sustainable Development Goals. The most obvious SDG it touches on is climate action. It’s been quite well publicised the effect that warming in certain areas is having on wildfires. Right now, we might understand how wildfires behave in certain areas but do we understand the new context in which we will have to operate? And if we take a more active land management approach, do we understand the consequences of that?

For example, if we carry out more prescribed burns, what impacts will that have on certain plants or animals? And how might the smoke from a prescribed burn differ from wildfire smoke? Hopefully, that’s where the increased physical understanding of fire comes into play. Hopefully thanks to the work of everybody in this area, we will continue to improve our ability to quantify the impacts of fires and characterize the fire well enough to hand that over to other disciplines. Then they will have a framework to help them answer those questions.

It also touches on other SDGs, such as sustainable cities and communities. For instance, in California, there has been a big growth of development in the wildland-urban interface, which is the space where human development meets nature. There is a need for understanding how wildfires impact communities on the frontline, and structures, like stores and homes.

There can be a case made that our research has impacts on other SDGs, such as clean water and sanitation too. After a fire burns, things like ash and mudslides can impact water quality and supply, so understanding those risks can help communities prepare. Again, the better we can characterize a fire, the better we can link these negative consequences to different fire scenarios.

Zakary Campbell-Lochrie interview: The architecture of wildfires / Social Responsibility and Sustainability by blogadmin is licensed under a Creative Commons Attribution CC BY 3.0

Emma Yule interview: A world too hot to handle?