…and what does the health team think?

We are conducting a study to get a better understanding of what is important to secondary breast cancer patients when making treatment decisions. We are also looking at what is important to the clinical team looking after the patients and to the general public. Our study aims to support shared decision making between patients and clinicians. The project is called the INFO-BC study. Read more on the HERU blog bit.ly/37n3ZB9

In January we officially launched the Info-BC survey. The study explores patient and health professional preferences for secondary breast cancer treatments using a health economics tool called a discrete choice experiment (DCE). The launch marks the culmination of over a year of research and hard work including literature reviews, qualitative interviews and analysis of the SMC’s Patient and Clinician Engagement (PACE) statements. Info-BC asks respondents to state their preference between hypothetical treatments which provide different benefits and toxicities to the patient. Patients are asked to imagine that they are considering the treatments for themselves whereas health professions are asked to imagine that they are recommending treatments for our hypothetical patient Irene.

The decision to include Irene was founded on feedback from health professionals who told us that it would difficult for them to recommend a treatment without knowing a little about the patient. The description we formulated for Irene was designed to reflect a typical secondary breast cancer patient so that responses from health professionals were more relevant to our real-life patient cohort. Official CTCAE descriptions of the grades of toxicities were shown to health professionals and patient language translations were shown to patients. To find out more about the nature of the hypothetical treatments, and the research which helped to design them, please read my previous post here.

There is a finite number of hypothetical treatment decisions which patients are asked to make which were D-efficient and generated by the NGENE choice metrics software. The potential choices were compiled and inputted into our survey which was designed and implemented using the Qualtrics online survey platform. The survey can be accessed using an anonymous link which can be found on our Info-BC landing page. We are recruiting via 4 key channels; 1) our cancer research nurse, Morag McIntyre, at St John’s hospital who has been directly approaching patients who have may complete the survey there and then on a tablet or later at home online 2) via social media channels with help from ECTU, the Usher Institute, Breast Cancer Now, HERU and the CRUK Edinburgh Cancer Centre just to name a few 3) we have been utilising our own personal networks and directly approaching NHS staff who are suitable participants for the survey. 4) a respondent panel organised via Qualtrics. We intend to continue recruiting until April at which point we will conduct a final analysis of the data

The Info-BC project is moving into its final stages and we are excited to discover how the survey which we have been working for over a year to design will tell us about patient and health professional preferences for secondary breast cancer treatments. We would like to thank the rest of the patients and NHS staff who participated in our early research, the charities and organisations who have been helping with our recruitment, and all those who have taken time out of their day to complete the questionnaire. We look look forward to updating you on Info-BC in the future.

Background to the project and the think aloud pilots

The INFO-BC (Supporting shared decision making in secondary breast cancer) project is continuing to make great progress towards releasing a full-scale survey to patients, health professionals and the general public. INFO-BC is a planned survey which aims to understand preferences for secondary breast cancer treatments, you can find out more here. The study recently completed the think-aloud pilot stage of the project. 10 patients and 5 health professionals piloted early versions of the questionnaire whilst being asked to talk through their decision making. The feedback we received during the pilots allowed us to make improvements to the questionnaire, we then showed the improved version of the questionnaire to the next respondents. Changes were often made to the attributes and levels in the Discrete Choice Experiment (DCE). Attributes refer to the factors of treatment which were included in the survey and levels refer to the different available options for the attribute.

The table below illustrates how the attributes and levels changed as a result of the think-aloud pilot. Diarrhoea didn’t change significantly but you can see that it is composed of three levels; None, Grade 1 and Grade 2. Grades refer to the official Common Terminology Criteria for Adverse Events (CTCAE) which are used by health professionals worldwide to classify medical problems, symptoms, and side effects. Health professionals tend to be familiar with CTCAE criteria so were told that the grades themselves, for patients they were given a description which effectively translated the grade into standard language. There were many changes which we implanted as a result of our piloting, here I will discuss three key changes which were of particular importance. 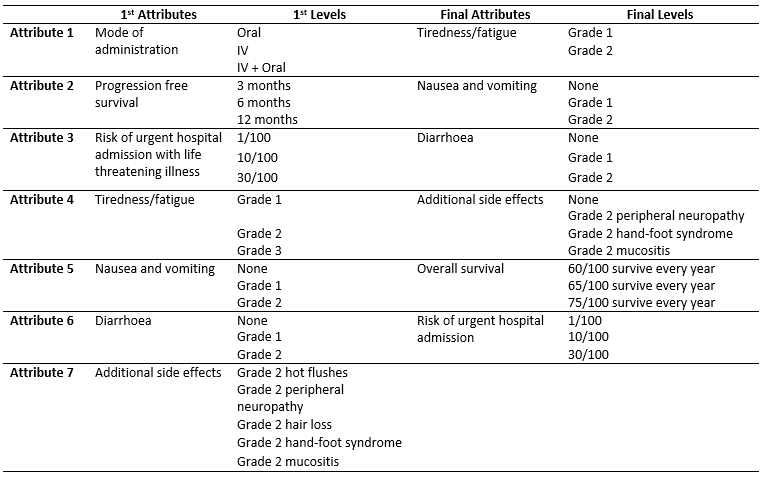 The second key change was that progression-free survival (PFS) was swapped for overall survival (OS). We initially failed to effectively communicate to patient respondents what PFS meant. PFS is an important measure for those who study cancer. PFS is the length of time treatment can control a cancer before it begins to grow at a clinically significant rate. It does not necessarily ensure that a patient’s life expectancy or quality of life improve. We realised that it was hard to disentangle the concepts of quality of life and length of life from patients’ interpretation of PFS. This meant that patients who chose options with better PFS weren’t necessarily interested in PFS itself, they may have been interested in a better quality of life and longer survival. A recent publication by Michael J. Raphael in Canada also came to our attention which assessed to the use of PFS in studies like ours, it argued that PFS was not being effectively communicated to patients. All of these factors considered we decided that it was simpler to ask patients to consider OS rather than PFS.

The third key change was that risk of urgent hospital admission (UHA) was combined with OS. In the early versions of the questionnaire, the respondents were shown a graphic of 100 people with some coloured in to represent risk of UHA. In a separate box, patients were shown a separate graphic illustrating the survival prospects at 1 year and 5 years for 100 people. Not only did the graphics for OS prove to be difficult to interpret but we failed to communicate to patients how the two concepts were related. In the early versions of the questionnaire, we intended the risk of UHA to be life-threatening, meaning that there was risk of death. We, therefore, attempted to communicate that the OS prospects were only relevant for individuals who completed treatment and that patients who experienced a UHA were required to stop treatment either because they had died or because treatment had proved too dangerous. This relationship was both difficult to understand and an added complication. It became apparent that we needed to more clearly and simply demonstrate the relationship. The solution we enacted was to present a single graphic as shown below which demonstrated a timeline which first showed how patients experienced a UHA within their first year of treatment, then how many patients could expect to be alive at 1 year, and how many could expect to be alive at 5 years. This solution proved to be easier to understand for respondents. 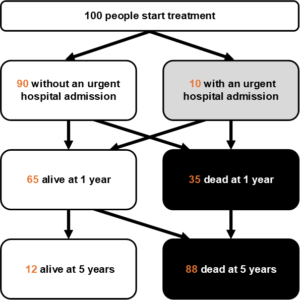 The think-aloud pilots proved to be extremely useful. I spend much time thinking about the precise scenario we are asking patients to imagine and it can be difficult to see what may be confusing to someone looking at the problem with a fresh pair of eyes. I would like to thank Morag McIntyre, the research nurse for INFO-BC, for conducting the pilots. I would also like to thank all of the patients and health professionals who took time out their days to pilot the survey and contribute to this important research.