The 99th Health Economics Study Group (HESG) meeting has just taken place (5-7th January 2022) at the University of Leeds. The HESG always makes for a great conference with excellent discussion and input into ongoing research. This is partly down to the unique set up of the meeting, whereby authors submit their work but they do not give a presentation of it. Instead, a discussant is assigned to read their paper and present a discussion of the research, forming a discussion agenda to encourage the audience to engage and input their thoughts and ideas.

The format truly allows for spontaneous brainstorming among the delegates and more often than not the authors leave with lots of interesting ideas, comments and suggestions to take forward in improving their work.

This Winter we were delighted to have our own Research Fellow, Giovanni Tramonti, representing Edinburgh Health Economics at the meeting. Giovanni was a discussant for a paper and kindly presented Elizabeth Lemmon’s et al’s work in the poster session – “The use of social care services by patients aged 50 and over diagnosed with colorectal cancer in Scotland”.

This work is the first in Scotland to analyse national data on social care service use by patients diagnosed with colorectal cancer. Check out the full poster below (all results are preliminary): 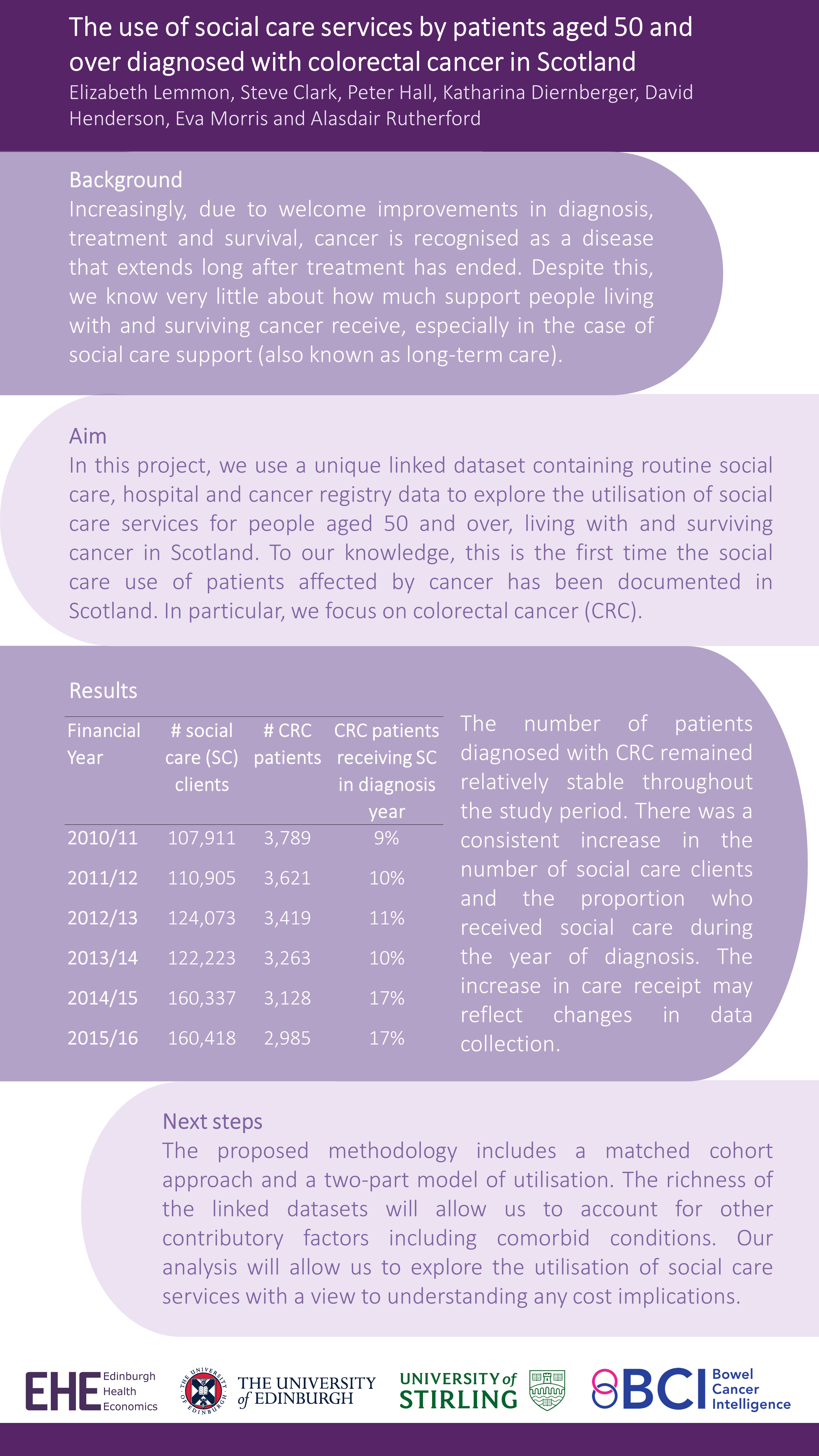 I am the primary researcher on INFO-BC. We plan to implement a discrete choice experiment (DCE). A DCE is a type of stated preference exercise where respondents make decisions hypothetical scenarios. Our team identified opportunity to use DCE’s in a secondary breast cancer setting. At the start of July I attended the Summer Health Economics Study Group (HESG) at the University of East Anglia (UEA), needless to say one of my main objectives was to discover what my peers in other parts of the UK doing in the area of preference elicitation. I found the three studies particularly interesting and have provided a summary of each of them here:

In summary the authors argue for the use of preferences assuming the approach is reasonable. They propose four questions to help Heath Economists structure their choice architecture. Finally they call for closer collaboration of Health Economists, behavioural scientists, philosophers, and policy makers to address the issue the sensitivity of preferences for choice architecture.

I acted as the discussant for this paper. The authors experimented with methods designed to mitigate hypothetical bias from their DCE. Hypothetical bias specifically refers to bias that arises when respondents fail to respond to a DCE in the same way that they would respond in an equivalent real life scenario. There was some evidence that two interventions went a small part of the way to mitigate hypothetical bias, these interventions were an honesty oath and a consequentiality script. To simplify the interventions: the honesty oath asked respondents to tick a box before the experiment and thereby promise to give honest responses; the consequentiality script informed respondents of the consequences the DCE is likely to have on policy decisions. The honesty oath was accompanied with the added complication that the completion rate was 10.3% lower than the baseline. The general verdict of the myself audience was that this is an interesting area for further research but that one would have reservations about implementing the proposed interventions unless stronger evidence was produced.