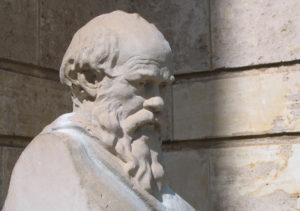 A few weeks’ ago, I asked the question, “Is our knowledge management best practice?“, although I left the answer as an exercise for the reader…

If you thought that our current practice could do with improving, but didn’t know where to start, I’m going to propose an alternative operational approach, drawn from Knowledge-Centered Service, some steps of which have been used for the University’s COVID-19 documentation.

In a brave (i.e. foolhardy!) move, I’m going to attempt a Socratic dialogue, despite being very far from a classicist!

Trebor: Hi, I’m Trebor, and I’ve just joined a new service desk as a subject matter expert.  I’m a bit daunted by all the new knowledge areas that I need to cover as part of this new team.  Where do I start to learn all the knowledge I need to answer any of the enquiries?

Robert: As it happens, I don’t think you’ll need to learn
all the knowledge – in fact I think it will be impossible!
Instead, you should use the knowledge base, and look
up the knowledge you need when the enquiry arrives.

Trebor: Sounds good – I’d no idea how I was going to learn and retain all the knowledge I would have needed!  It’s good to know that I can look up the answer if I don’t know it.

Robert: Actually, we want you to look up the answer
even if you do know it…

Trebor: Don’t be stupid, if I know the answer, I don’t need to look it up!  As a subject matter expert I can answer pretty much anything off the top of my head without reference books – that’s why I got the job!

Robert: …because if the knowledge item can be
improved, we want you to improve it…

Trebor: Ah, that makes more sense, but why haven’t I been asked to create the knowledge item in the first place?  I’m the best one to have written it, and I usually get asked every couple of years to write down everything I know.

Robert: …and if if doesn’t exist, to write the knowledge
item.  So, yes, we do want people to write the items
when they search for something and it isn’t there.

Robert: Yes, we’re going to populate it as enquiries
come in, so we can be certain that the knowledge items
match the enquiries being asked (in terms of content,
language and level) and are up-to-date.

Robert: Don’t forget that “I don’t know, but I’ll get back
to you”, is often an acceptable response.  And perhaps
you should speak to James, as he’s got an opinion on
users waiting whilst answers are being found and
provided.  However, once the answer is found, it should
be documented.  Being needed once is evidence that
a knowledge item is required.

Trebor: But what happens if someone else is asked the question, rather than me?

Robert: All staff can record the knowledge item based
on their research – the original phrasing of the user’s
question and the answer provided can ensure that
the knowledge item is found in future in similar
circumstances.  But that’s also why we want staff
to search the knowledge base even if they know the
answer, as they may be able to improve the item.

Trebor: So someone else could “fix” my knowledge item?

Robert: Yes, but in doing so, they should be moving the
item closer to the user language – incorporating the
way the users ask the question and understand the
answer.  And as they searched first, they won’t have
created a duplicate knowledge item.

Trebor: But what if I’m asked something and the knowledge item is of poor quality and I’m really not qualified to correct it?

Robert: If you really feel incapable to fix the item,
you can flag it for correction by commenting on it –
the person accountable for the item will be alerted
and they can manage the correction.

Trebor: I’m not convinced – how will people know how valuable I am to the team?  Previously I’ve had bonuses as I’m the only one that can answer some of these questions!

Robert: Rather than valuing people for remembering
knowledge, we value them for producing new
knowledge – every time your knowledge item is
used, it should be linked.  People can even single
it out as being useful and comment on it.  This
will be used to highlight the most frequently used
and highest quality knowledge items.

Trebor: I’m still not convinced, but I’ll give it a try…

What Trebor and I discussed was an abbreviated “Solve Loop” from KCS – time will tell whether he’s won over in practice!

Another way? An alternative knowledge management practice / ITIL Tattle by blogadmin is licensed under a Creative Commons Attribution CC BY 3.0

Service Desk Priorities – The User or The Queue?