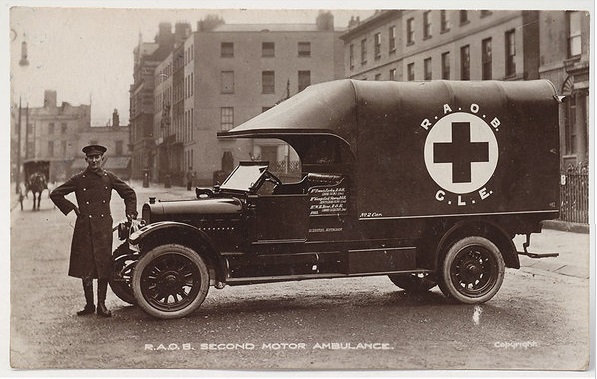 Doing certain things now will give us breathing and thinking space to assess our next response.

Battlefield medics use MARCH, which in priority order means:

Massive hemorrhage – if this isn’t stopped rapidly, everything else is in vain

Airway – ensure an airway, as without a clear airway, the casualty can’t breathe

Respiration – are they breathing?

Danger – remove yourself and (optionally!) the casualty from harm

Response – are they conscious?

Breathing – are they breathing?

In both cases, each step buys time for the next.  Indeed a big part of first aid is buying time until the casualty can get to more qualified, more experienced or better equipped care!

The text book answer is, to restore normal service operation as quickly as possible.  More pointedly, our users don’t care about normal service operation, instead they want to achieve something through the use of our services, so our immediate goal should be to get, or keep, them moving.  This is true even if the quick fix isn’t perfect, and might not even touch the cause of the incident!

The classic (but fast becoming historical!) example is a student needing to print out an assessment for a deadline, but the printer is broken.  The student doesn’t want us to fix the printer, they just need the printout, so Incident Management is about achieving that, for example, by pointing them to a working printer.  Putting up a sign, “this printer is broken, use that one instead”, still doesn’t fix the printer, but does help other students with their immediate need.  Having put up the sign (thus stemmed the students) we now have bought time to address the underlying cause.

Incident Management defines the immediate actions that need to be taken when something goes wrong with a service, focused on rapid restoration – without consideration of “why?”, the underlying cause(s), or future prevention.

At times, a sticking plaster is all someone needs.  For other scenarios, first aid alone is not enough and A&E will be required, but in all cases, first aid is the starting point.  Similarly Incident Management must be done and may be all that’s required, however at other times, we really do need to address the underlying cause after utilising Incident Management.  In process terms, we’re moving on to Problem Management, however I’ve bought time to leave that for for another post…

Immediate Actions: First Aid and Incident Management / ITIL Tattle by blogadmin is licensed under a Creative Commons Attribution CC BY 3.0

From Immediate Actions to Problem Resolution – A kneesy guide to ITIL and the NHS.