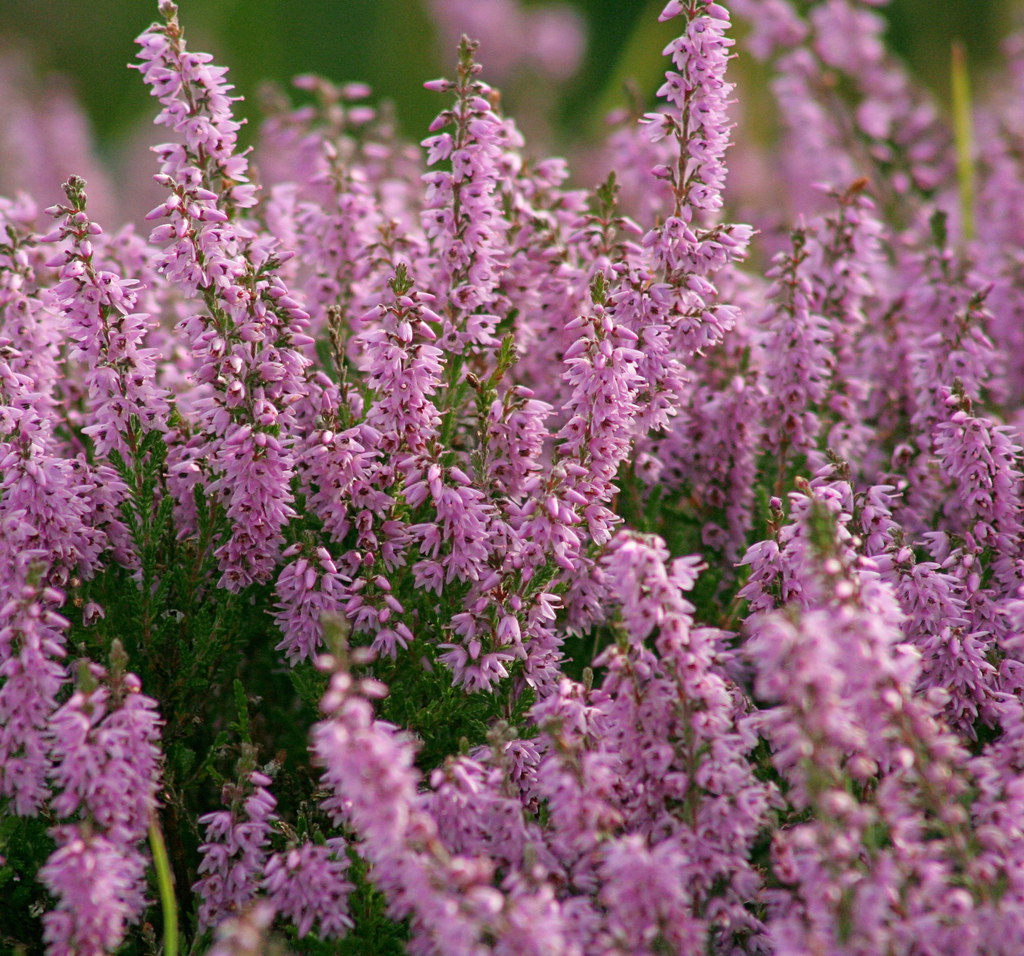 The ‘secret’ of making heather ale has been a popular folktale in Scotland, with claims that the brewing of it dates back to ancient times.

I came across a few references to it while digitizing the ATU index cards in the SSSA’s Tale Archive. 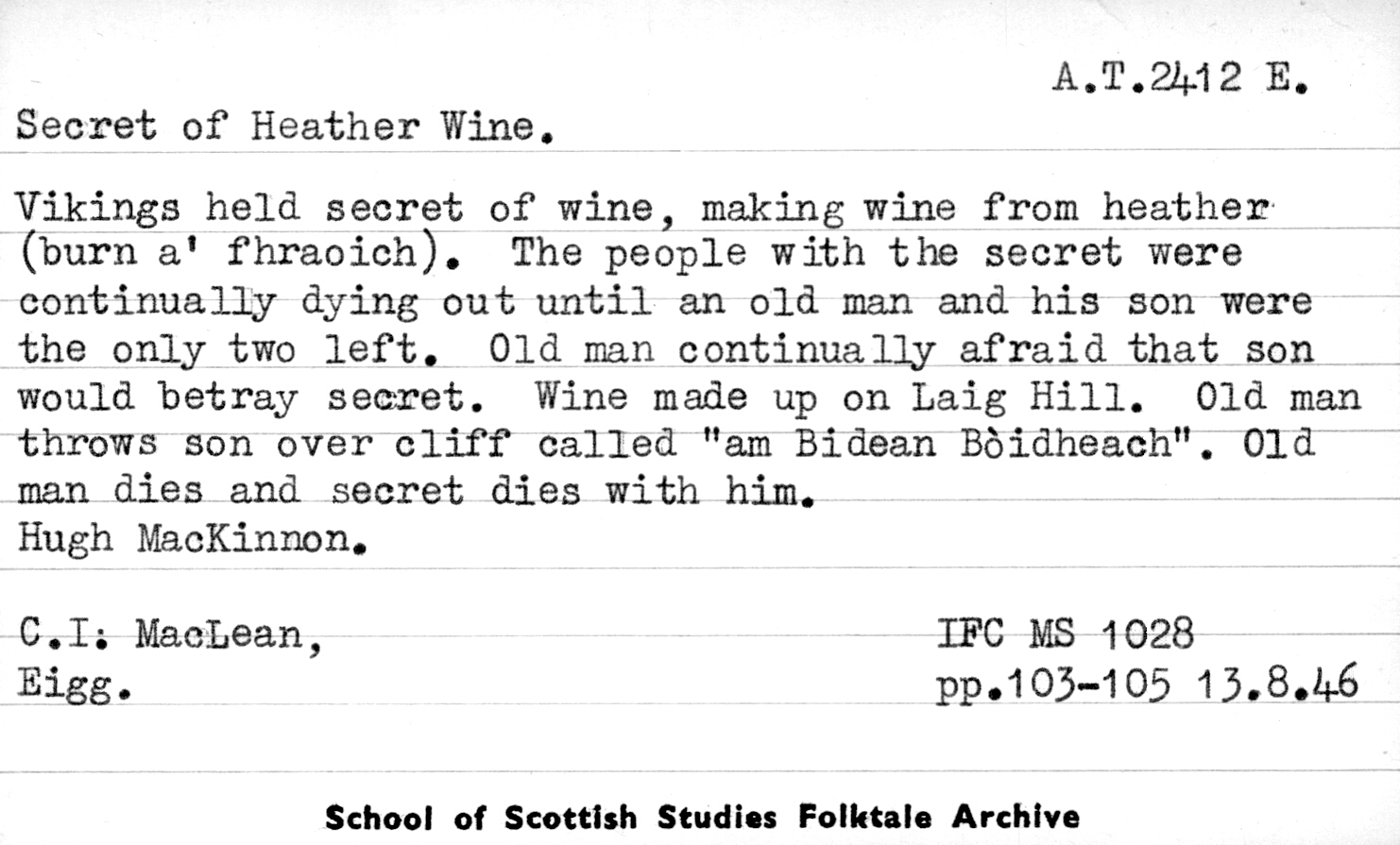 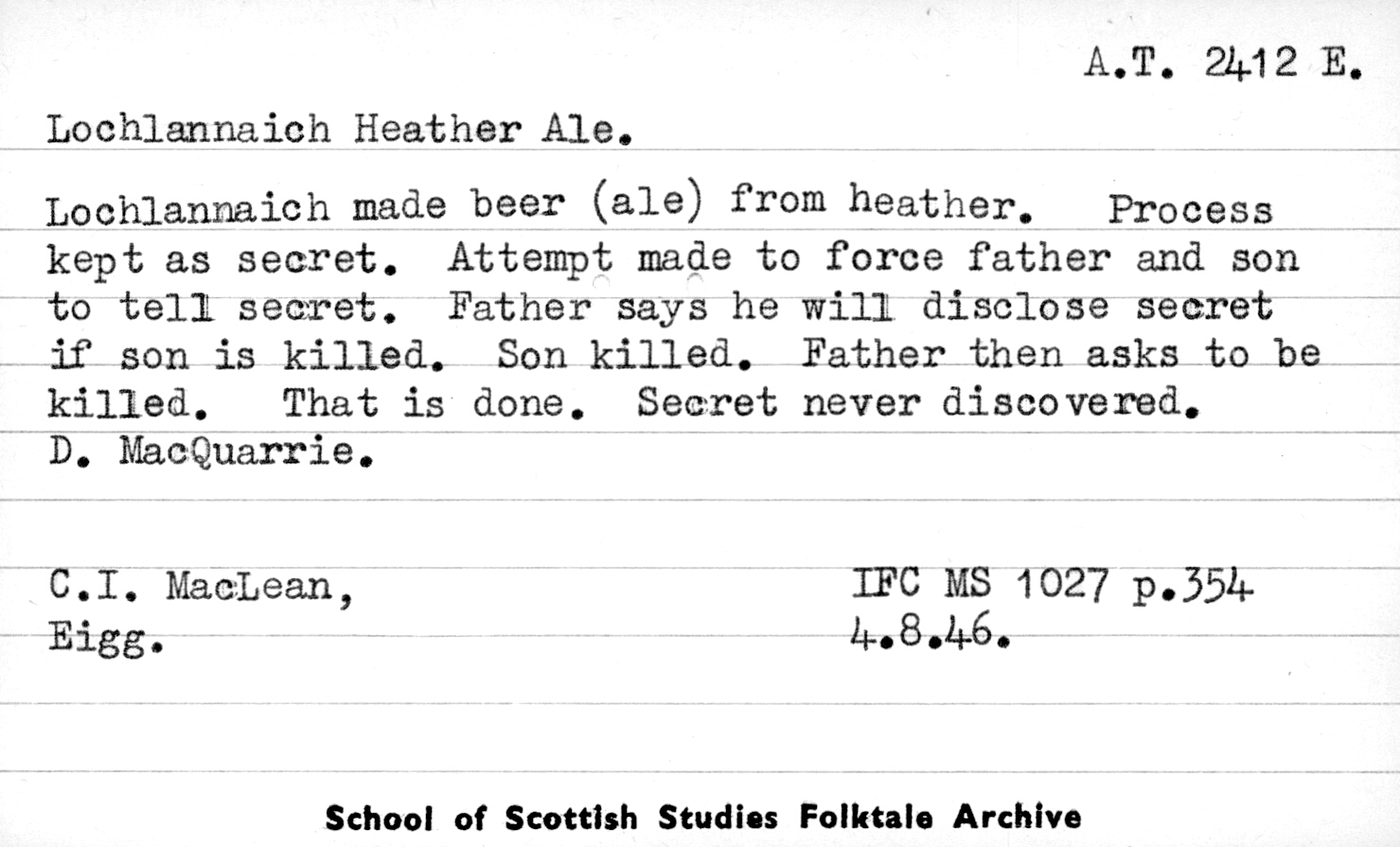 Accounts differ, as to whether it was the Vikings or ‘The Pechs’ that held the secret to making the ale, but the similar vein that runs through them is that eventually there were only two people in the world who held the secret: a father and his son. When they were forced to disclose their secret, the father claimed he would share the recipe, but only if his son was killed first. This request was followed through and the father then exclaimed that he had lied – he never intended to share the recipe, but believed that his son would have, being weaker than himself, and therefore had him killed to protect the secret forever!

You can read a full version of this story in English in Robert Chambers’ Popular Rhymes of Scotland. The story starts with this charming description of the Pech people:

“LONG ago there were people in this country called the Pechs; short wee men they were, wi’ red hair, and long arms, and feet sae braid, that when it rained they could turn them up owre their heads, and then they served for umbrellas.”

Listen to a 1961 version on the Tobar an Dualchais website by John Jamieson Irvine, recorded by School of Scottish Studies fieldworker, Elizabeth Sinclair.

Another wonderful reference to this story is the 1890 poem “Heather Ale” by Robert Louis Stevenson.

From the bonny bells of heather
They brewed a drink long-syne,
Was sweeter far than honey,
Was stronger far than wine.
They brewed it and they drank it,
And lay in a blessed swound
For days and days together
In their dwellings underground.

There rose a king in Scotland,
A fell man to his foes,
He smote the Picts in battle,
He hunted them like roes.
Over miles of the red mountain
He hunted as they fled,
And strewed the dwarfish bodies
Of the dying and the dead.

Summer came in the country,
Red was the heather bell;
But the manner of the brewing
Was none alive to tell.
In graves that were like children’s
On many a mountain head,
The Brewsters of the Heather
Lay numbered with the dead.

The king in the red moorland
Rode on a summer’s day;
And the bees hummed, and the curlews
Cried beside the way.
The king rode, and was angry,
Black was his brow and pale,
To rule in a land of heather
And lack the Heather Ale.

It fortuned that his vassals,
Riding free on the heath,
Came on a stone that was fallen
And vermin hid beneath.

Rudely plucked from their hiding,
Never a word they spoke:
A son and his aged father—
Last of the dwarfish folk.

The king sat high on his charger,
He looked on the little men;
And the dwarfish and swarthy couple
Looked at the king again.
Down by the shore he had them;
And there on the giddy brink—
“I will give you life, ye vermin,
For the secret of the drink.”

There stood the son and father
And they looked high and low;
The heather was red around them,
The sea rumbled below.
And up and spoke the father,
Shrill was his voice to hear:
“I have a word in private,
A word for the royal ear.

“Life is dear to the aged,
And honour a little thing;
I would gladly sell the secret,”
Quoth the Pict to the King.
His voice was small as a sparrow’s,
And shrill and wonderful clear:
“I would gladly sell my secret,
Only my son I fear.

“For life is a little matter,
And death is nought to the young;
And I dare not sell my honour
Under the eye of my son.
Take him, O king, and bind him,
And cast him far in the deep;
And it’s I will tell the secret
That I have sworn to keep.”

They took the son and bound him,
Neck and heels in a thong,
And a lad took him and swung him,
And flung him far and strong,
And the sea swallowed his body,
Like that of a child of ten;—
And there on the cliff stood the father,
Last of the dwarfish men.

“True was the word I told you:
Only my son I feared;
For I doubt the sapling courage
That goes without the beard.
But now in vain is the torture,
Fire shall never avail:
Here dies in my bosom
The secret of Heather Ale.”

Nowadays, in the age of the internet and search engines, the guarding of a recipe to the death seems quite ridiculous! Also, to our modern sensibilities allowing a tradition to die out and not be preserved in some form or another would be almost unthinkable. The School of Scottish Studies Archives, and others like it around the world, exist to collect, preserve and share oral and written tradition. This work is very important, and crucial to our understanding of the past, present and future. The world is a much richer place for it!

If you’d like to try making your own heather ale, check out this recipe. Let us know how it turns out!

“The Secret of the Heather Ale” Munro, Neil. The Lost Pibroch: And Other Sheiling Stories. United Kingdom: W. Blackwood, 1896.

The Secret of Heather Ale (Fìon an Fhraoich) / Gaelic Algorithmic Research Group by blogadmin is licensed under a Creative Commons Attribution CC BY 3.0