The study of folktales can reveal a lot about cultures from around the globe, including the movement of people and ethnic groups.

I recently came across a ‘Hero Tale’ that caught my eye, entitled Am Breabadair agus an gille glas or The Weaver and the Grey Lad, in the Tale Archive, copied from an edition of Tocher (no. 42, 1989). The story is recited by Hugh MacPhee in Gaelic, recorded by Dr. Margaret A. Mackay in Alberta*, Canada (transcribed by Peggy McClements and translated by Donald A. Macdonald). I was raised in Alberta, and so the biographical details of the reciter piqued my interest. The tale in Tocher includes an interesting footnote: ”Emigrants from the Hebrides continued to settle in Western Canada well into the twentieth century, and Hugh MacPhee was one of a group from Benbecula and South Uist who were settled on lands near Clandonald, Alberta, in the early 1920s. His family was one known for its storytellers, including almost certainly the Donald Macphee so vividly described by J.F. Campbell in the introduction to Popular Tales of the West Highlands (I, pp. xxi-iii): this is a gift which Hugh’s son, Alex Norman MacPhee of Vermilion, Alberta, still keeps alive.” You can read the tale in full below.

Alex Norman is actually listed on the Tobar an Dualchais website, and you can find out more information about him here. The website states that “Despite spending the vast majority of his life in Western Canada, Alex did not lose his mother tongue, and was well versed in the culture and history of the Gaels on both sides of the Atlantic.” 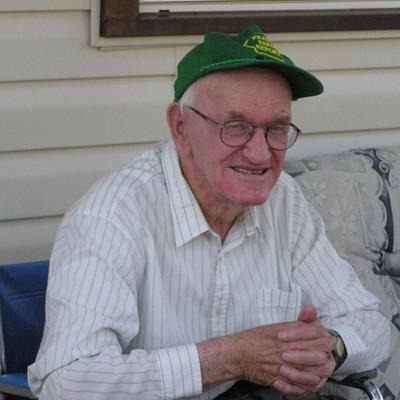 If as Tocher states, Alex’s ancestor is in fact the Donald Macphee described in Popular Tales of the West Highlands, what a great treasure for the MacPhee family it is to have such a wonderful and detailed account of your ancestors and their dwellings in their home country. Read the full account here.

There is a significant population of people of Scottish ethnicity in Canada, in fact the 2016 Canadian Census lists “Scottish” as the third highest ethnic origin among its respondents. The Maritime provinces are well-known for their Scottish diaspora, but Alberta less so. Even so, evidence of Scottish culture and influence can be seen across Alberta, with plenty of Albertan place-names originating in Scotland, such as Calgary, named after Calgary Bay in Mull by Lieutenant-Colonel James Farquharson Macleod (1836 – 1894), who served as Commissioner of the North-West Mounted Police and was born in Drynoch on the Isle of Skye. Similarities between Calgary, Scotland and Calgary, Canada start and end with the name, however! Other places include Banff, Carstairs and Airdrie to name a few. Alberta even has an official registered tartan.

Listen to this great 1979 recording by Dr. Margaret A. Mackay on the Life for emigrants in Canada.

If you’d like to look up records of emigration from Scotland, including ship passenger lists from 1890 onwards, visit the National Library of Scotland.

*It is important to recognize that the province known as Alberta is on First Nations lands across the boundaries of Treaties 6, 7 and 8. The Numbered Treaties of Canada have a complicated history and I encourage readers to find out more about them and the effects they have had on the indigenous people of Canada and their way of life. Lieutenant-Colonel Macleod, who I mentioned earlier, was one of the major signatories on Treaty 7 in present day Southern Alberta. The treaty was signed in Fort Macleod, named after him. 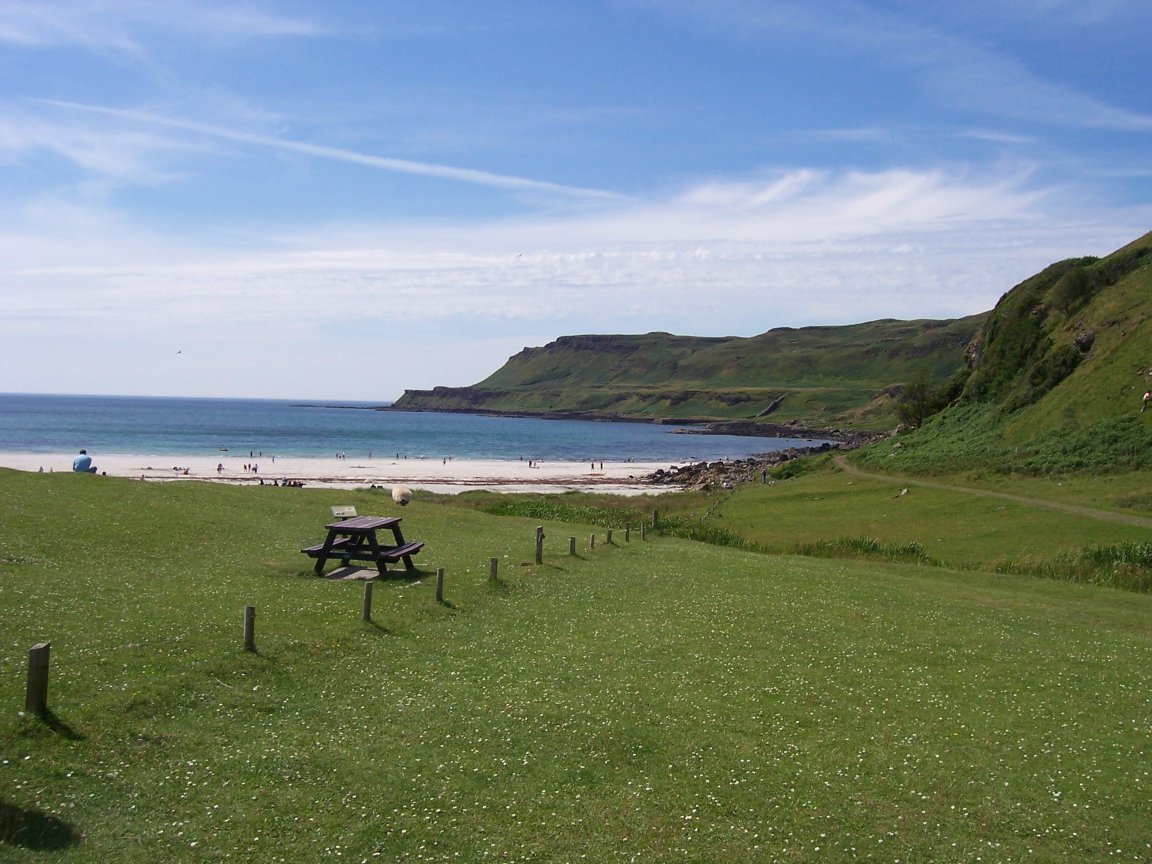 Am Breabadair agus an gille glas or The Weaver and the Grey Lad (click on the photos to see them full screen): 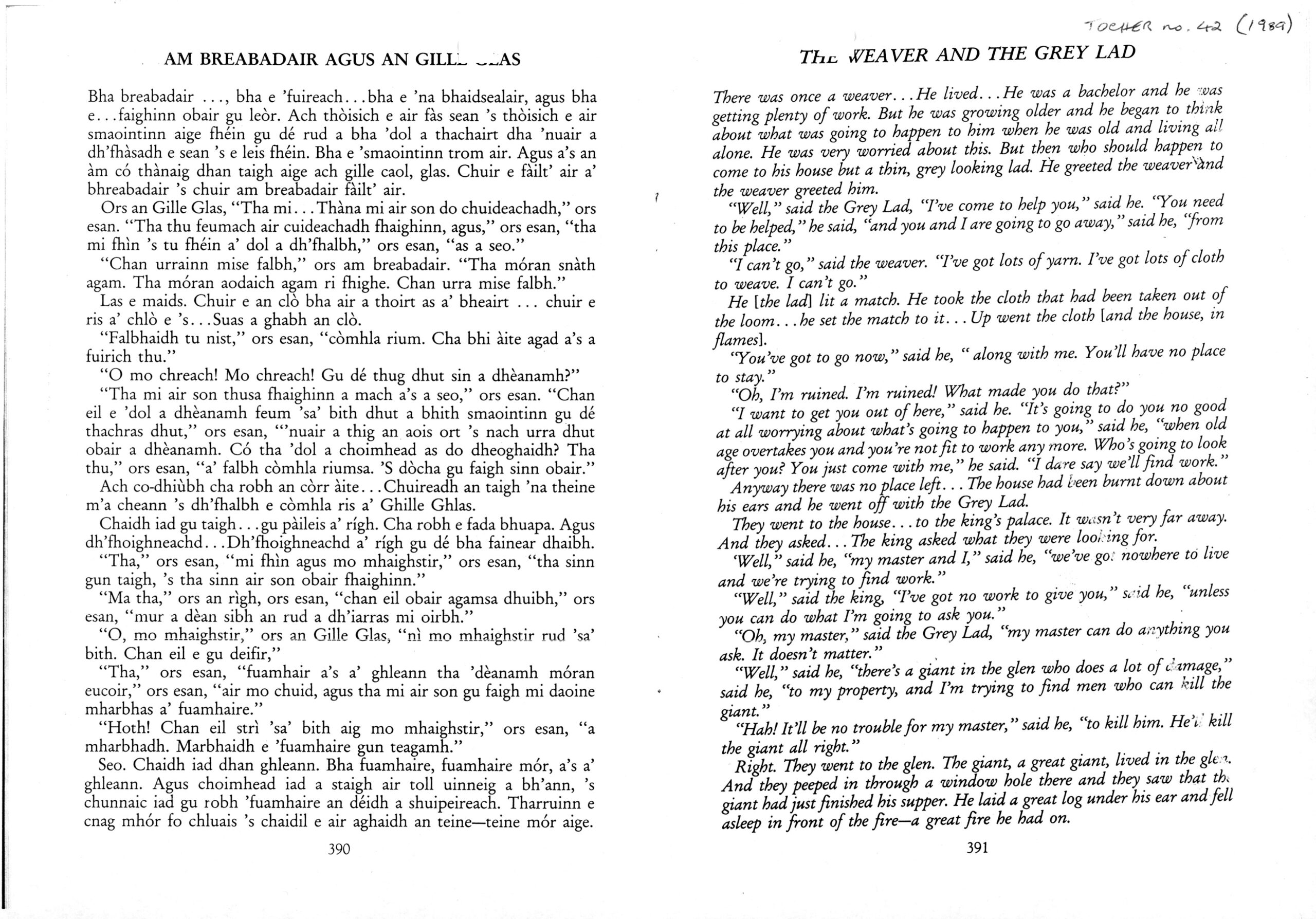 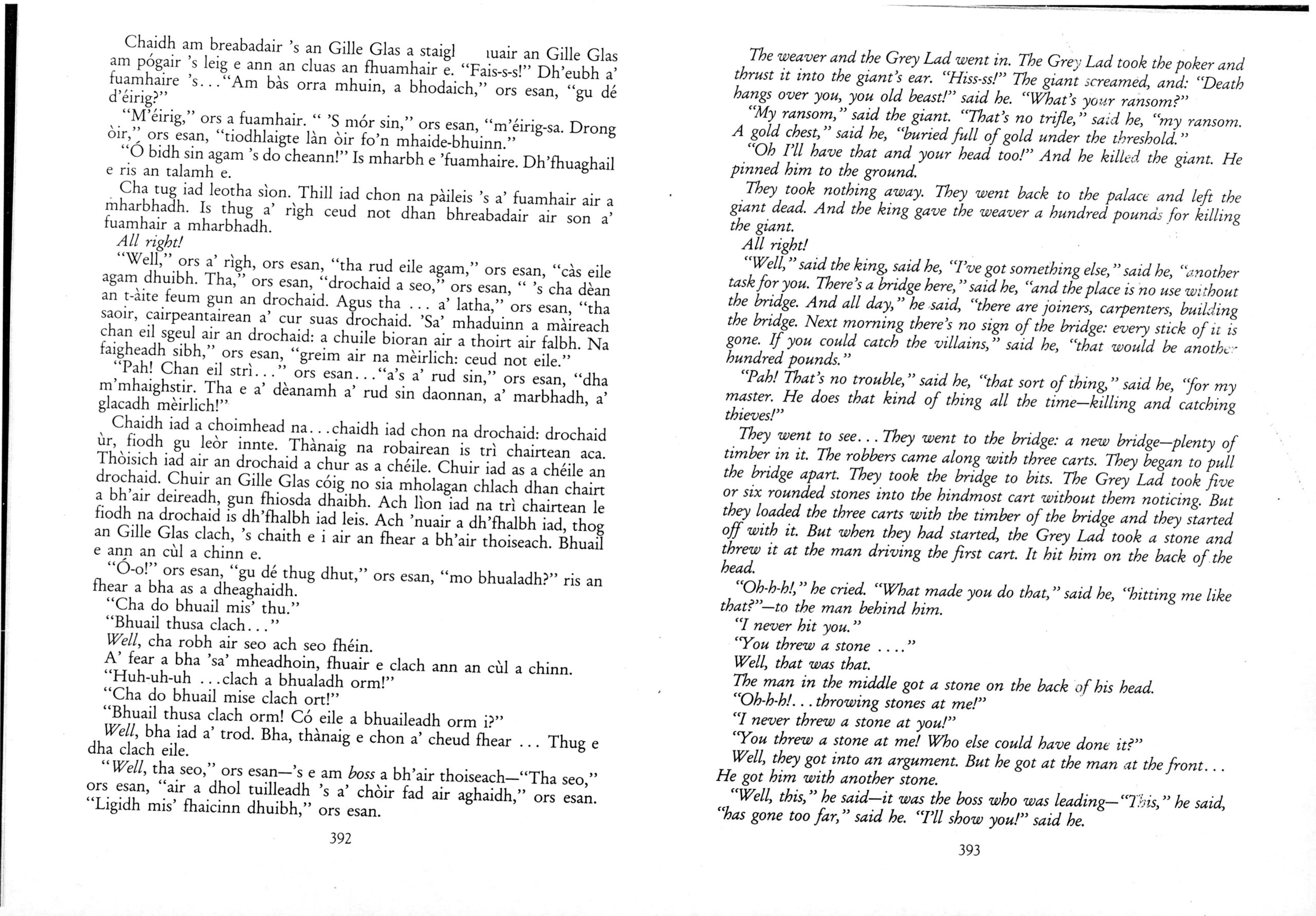 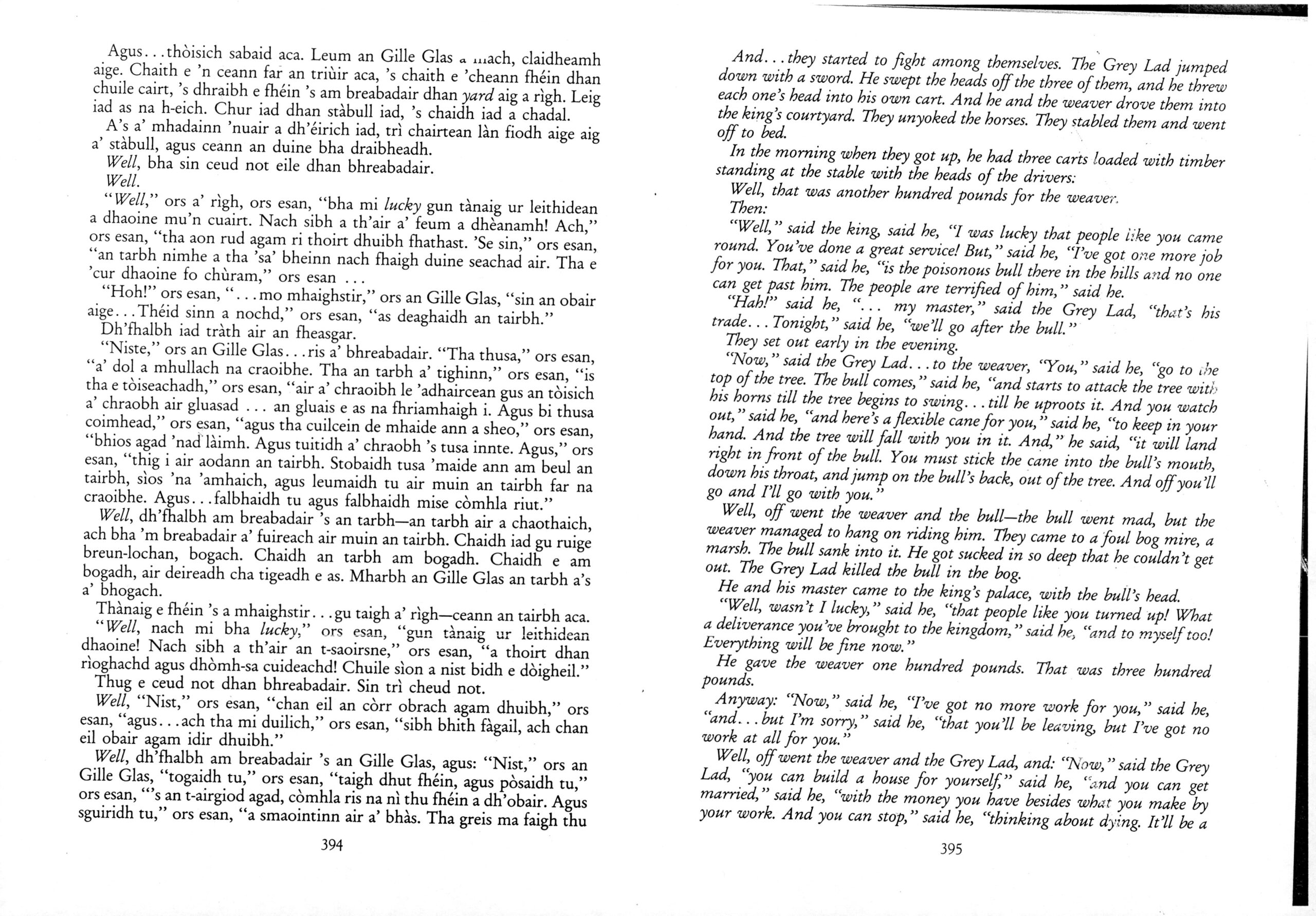 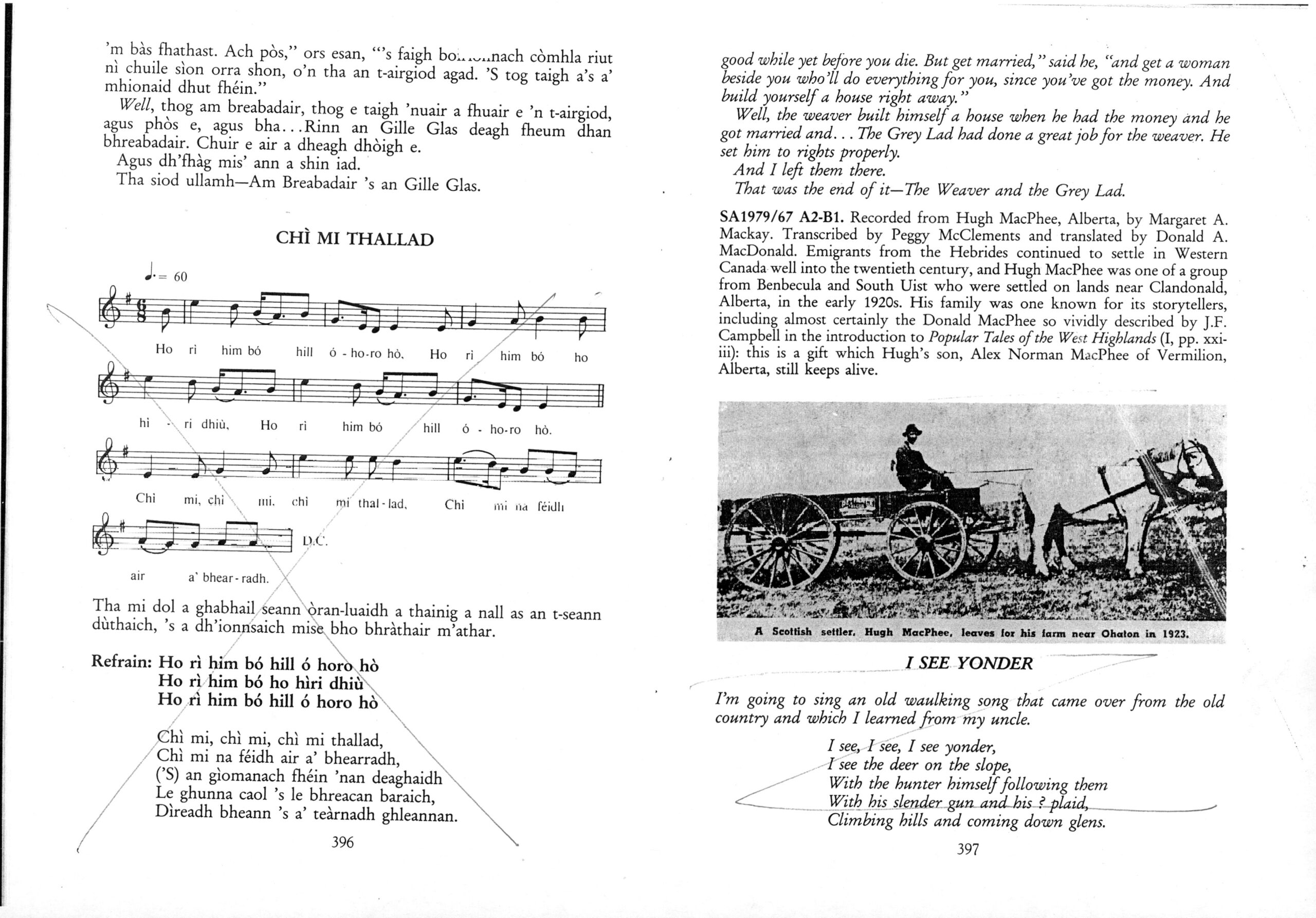 Scottish Settlers in Alberta, Canada / Gaelic Algorithmic Research Group by blogadmin is licensed under a Creative Commons Attribution CC BY 3.0