Since 2008 people from across the UK have celebrated Gypsy, Roma and Traveller History Month each June. Through celebration, education and raising awareness, Gypsy, Roma and Traveller History Month helps to tackle prejudice, challenge myths and to amplify these voices in wider society. At The School of Scottish Studies Archives, we try to share relevant material in June from our own collections, which highlight Traveller life and experience; this material is a rich seam indeed and it’s a privilege to hold Traveller oral testimony here.

To celebrate #GRTHM here on this little corner of the internet, I wanted to share something from our Tale Archive, from someone whose name appears again and again in the indexes and transcriptions –  Alasdair “Brian” Stewart (1911-2008).

Alasdair “Brian” Stewart was of the Sutherland Stewarts, a family of the Highland Traveller tradition who can be found throughout our collections sharing tale, tradition and song. He was nicknamed Brian, due to his place of birth (Ach a’ Bhràigh) and he learned much of his repertoire of Gaelic tales – particularly hero tales –  from family members, such as his uncle Ailidh Dall Stewart (1882-1968) and his grandmother Susie Stewart (1846-??). 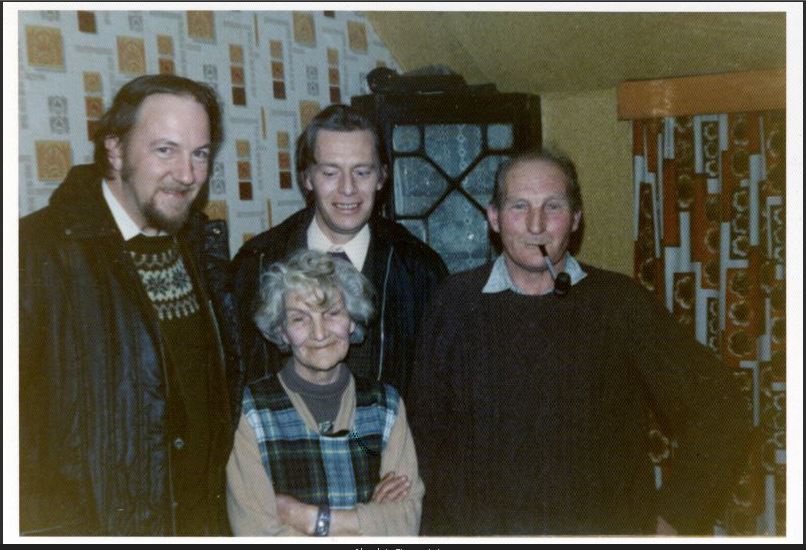 Brian was recorded a several times by fieldworkers from the School and in 1978 he was the focus of a volume of Tocher and I thought that it might be interesting to share Hamish Henderson’s recollections of meeting Brian and also a tale from him, transcribed for that volume.

It was the discovery, in 1953 and 1954, of an enormous wealth of folktale among the travelling people of Aberdeenshire that made me determined to look for oral narrative in Gaelic among the North Highland travelling folk. […] What we discovered that summer exceeded all my expectations. The semi-nomadic Stewarts of Lairg – the ‘summer walkers’, as the local crofters called them – turned out to be the custodians of a folk-cultural heritage even more voluminous than that of their North-East counterparts. Although every single member of the group could be considered a tradition bearer, the principal figure- and acknowledged champion – among them was blind AIec Stewart, better known as Aili Dall. This amazing old hero had a version of Am Bròn Binn (The Sweet Sorrow), an heroic lay now very rare, and stories of Oisean and the Féinn  as well as a vast store of wonder tales and other Marchen. My notebook, already packed with information about travellers recorded en route, was soon full of the names of other Stewarts and Williamsons who, as Aili Dall thought, would have material of interest for us; and among these I wrote down the name of another Alec Stewart who was a nephew of Aili’s, whose nickname was Brian, and who was working in the Forestry and living at Culrain.

When I got back to Edinburgh this information was passed on without delay to Calum Maclean, and Calum followed it up the same summer. His own beautifully written account of his meeting with yet another Alexander Stewart – ‘Alasdair mac Phàdruig,’ whom I had recorded at Tomich, Muir of Ord, a few weeks earlier while on the way to Sutherland – and with old Grace, Alasdair’s mother, will be found in Chapter VI of his book The Highlands (recently republished by Club Leabhar, with a preface by Séan O Súilleabháin). Alasdair mac Phàdruig told him many hours of stories in the Ord Arms Hotel, and was still telling them right up to the time Calum had to rush to catch a train to Brora. Unfortunately Calum did not locate Aili Dall and his entourage when in Sutherland –  they were of course on the move at the  time-  and the onset of the serious illness which then beset him made subsequent collecting much more difficult.

Consequently I returned myself to Ross-shire and Sutherland in 1957 and 1958 and in both years spent several weeks travelling around with the ‘summer walkers’. It was during the second of these tours that I went to see Brian in Culrain. Unlike his uncle, who still kept up the ancestral summer caravan through the great cleared straths of Sutherland, Brian was permanently settled in a neat little house called ‘the Bungalow’, kept spotless trim by his charming wife Ina. Had I not known of Briarn’s impeccable traveller lineage, I would have taken him at first sight for member of the laity – a crofter, or what-ever. It became immediately clear, however, that he was exceedingly and justifiably proud of his traveller Stewart ancestry, and was eager to speak about their way of life. (Since retiring from the Forestry three years ago he has spent part of every summer driving along the roads he travelled with horse anrl cart as a boy, and cleaning up the wells and camping sites used by his people – some of which must have a very ancient history).

Prospecting for stories and other lore from Brian, I found that his repertoire to a large extent duplicated that of his Uncle Aili Dall – nor was this strange, for he had learned most of his stories from old Susie, Aili Dall’s mother. Uncle and nephew thus had a common source for much of their material. Old Susie died in 1938 aged 9l; this means she was born 13 years before the publication of the first volumes of Campbell of Islay’s Popular Tales of the West Highlands, and must have learned many of her stories orally in the mid 19th century from relations born before the end of the 18th century – from folk, therefore, who in all likelihood were travelling the roads while ‘Ossian’ Macpherson was still alive.

Brian’s versions of the tales offer many interesting points of comparison with the versions told by his uncle, and the recording – and, if possible, re-recording – of his complete repertoire seemed an obvious necessity.

The story I have chosen (transcribed in Gaelic as it was told, and translated into English) is A’ MARAICHE MAIRNEAL, a variant of ATU433B King Lindworm – a tale type that often deals with maidens disenchanting serpentine husbands. Donald Archie MacDonald thought that Brian’s version was unique to the Sutherland Stewarts.  (Click on the image below to access the pdf of this tale.) 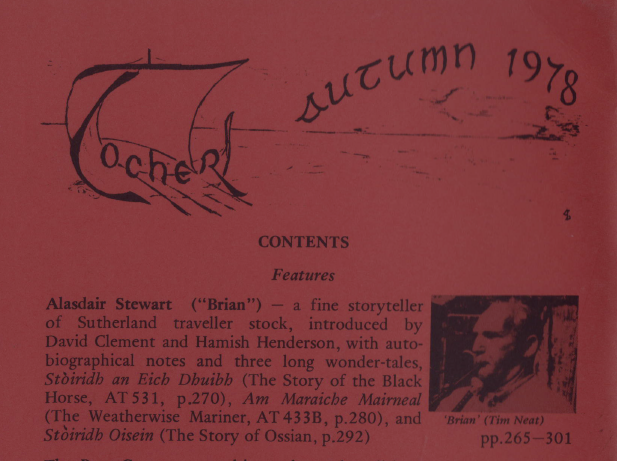 For further reading of Brian Stewart and his storytelling style, you can read Carol Zall’s article in Scottish Studies Vol 36:

To find out more about Gypsy Roma Traveller History Month events in Scotland, you can visit https://grthm.scot/ and follow the hashtag #GRTHM22 on social media.