Copying Files, Flows, a Plan, SharePoint Lists and a Notebook from one Microsoft Team to another 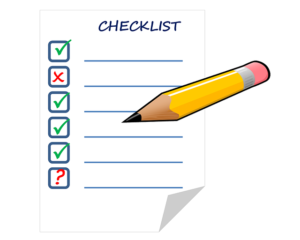 A couple of weeks ago I discovered a University document called the New Learning Technologist Development Toolkit. And so I began a new project to follow it and develop my skills in Learning Technology. Obviously a project like this needed some way over the top organising… 😁

A while ago, I developed my own Microsoft Team called ‘Team of Me’, for organising myself and bringing my notes and notifications together in lockdown. This seemed like a good place to organise my training plans, so at first I created a channel in this Team to collect resources for this new project.

I began setting up a plan in Planner, creating lists of links, collecting PDF resources, making a few notes in the OneNote notebook and setting up some helpful Flows to channel messages into the right places, and cheer my progress along.

However, I soon discovered that the New Learning Technologist Toolkit, which looked like a short PDF, was actually a lot bigger than I’d thought. Everything it mentioned sent me down another rabbit hole of links and documents, and I realised it would need several channels in its own right to organise it all.

The challenge now was to copy across the content I had collected and created in my original Teams channel into this new team.

There turned out to be a lot of that too, so I’ve made this handy Table of Contents for getting around this post:

Copying Files to another Team

The files were straightforward to copy, because I owned both Teams. I only had to select them all in the original team, choose the Copy option, and then find the new team in the Teams organisational structure: 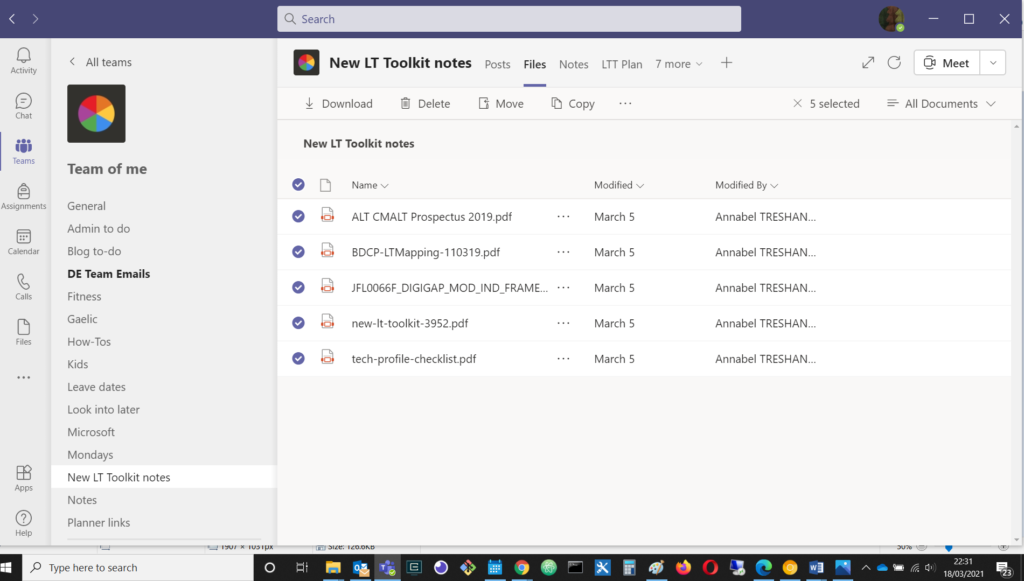 Selecting the files in the first Team 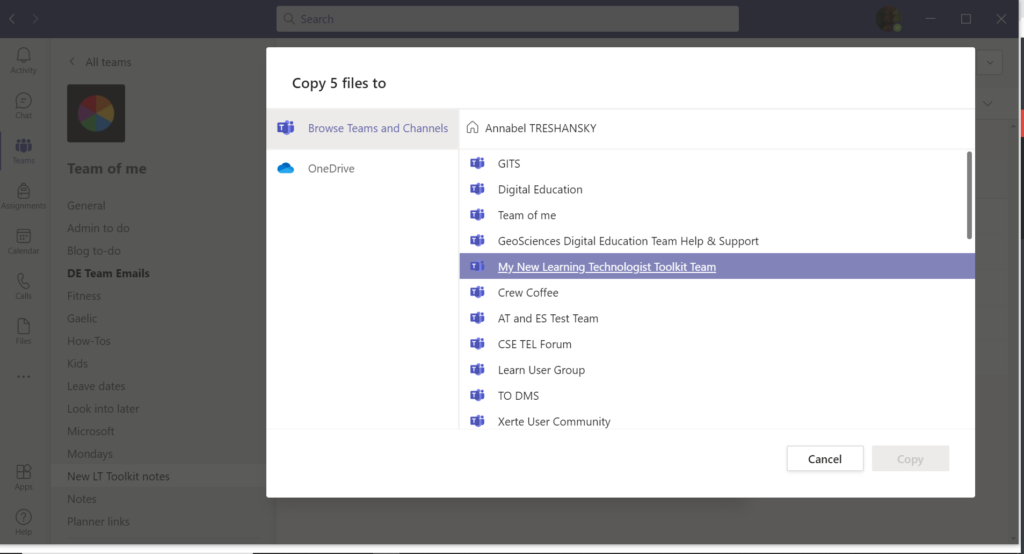 Copying the files into the second Team

These files will then appear in the Document Library of the second Team’s SharePoint site, in a folder with the same name as the Teams channel they were copied from.

To open the Team’s site in SharePoint, click on the three dots in the top right corner and then choose ‘Open in SharePoint’ from the drop down menu that appears: 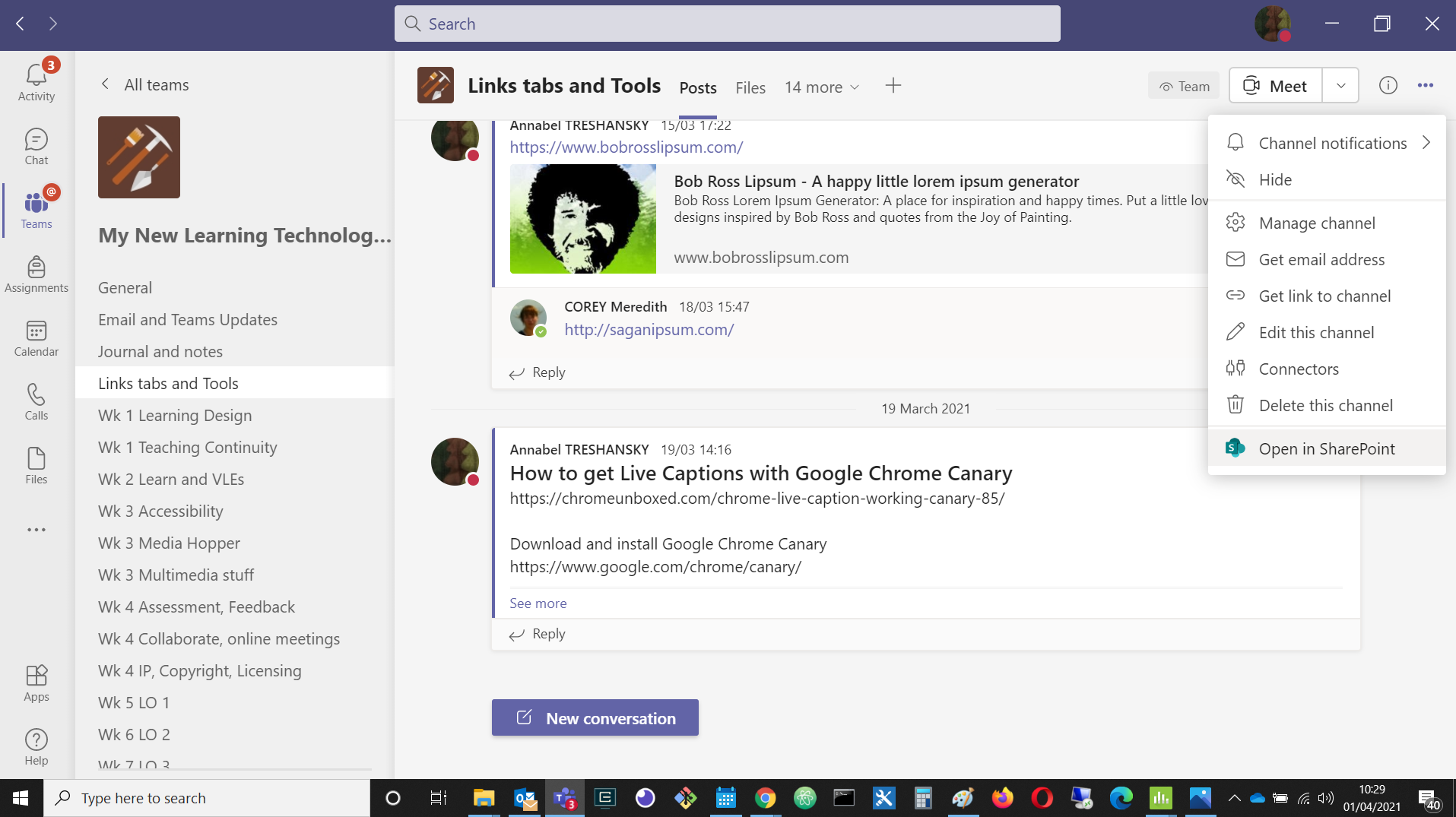 Here’s a screenshot of the Document Library for my first team, showing folders for each channel:

The Team’s SharePoint document library, showing a folder for each channel in the Team 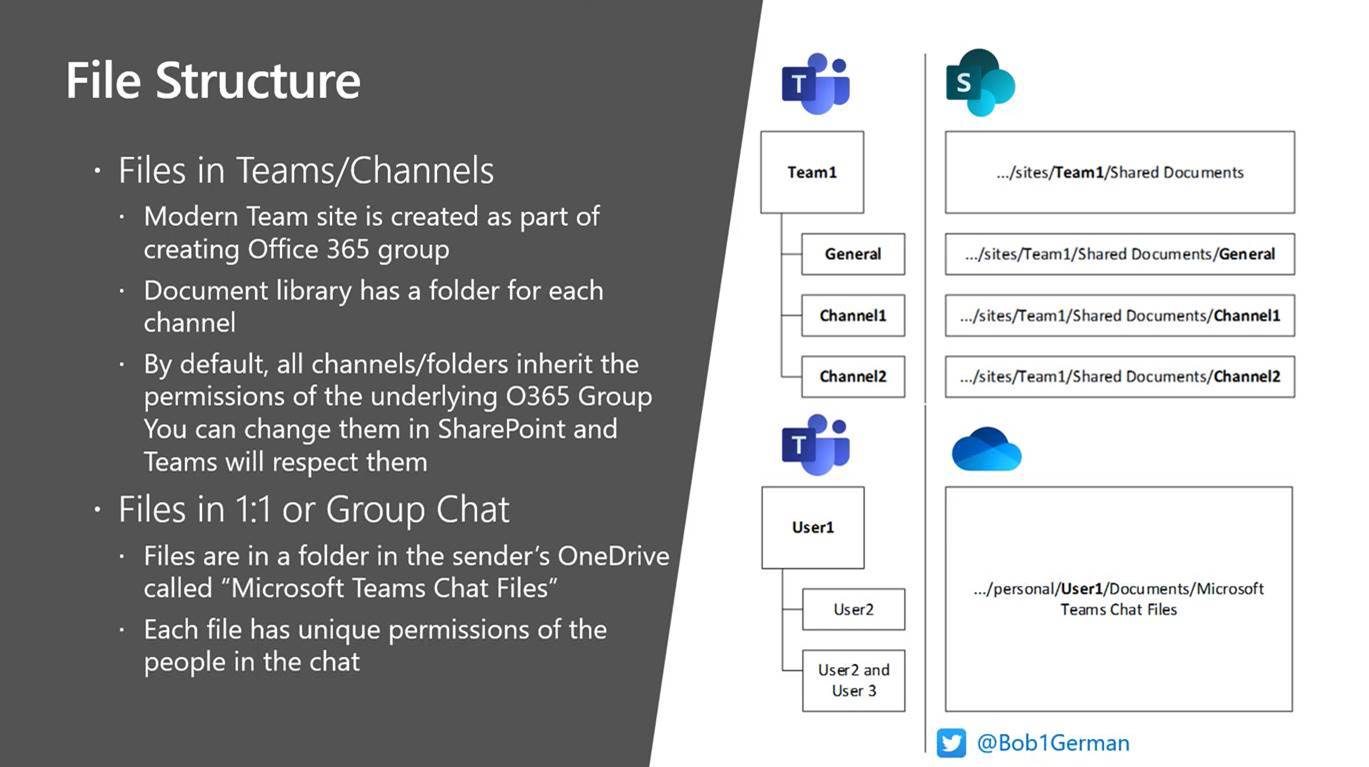 I also discovered you can display a single file by adding a PDF tab to Teams: 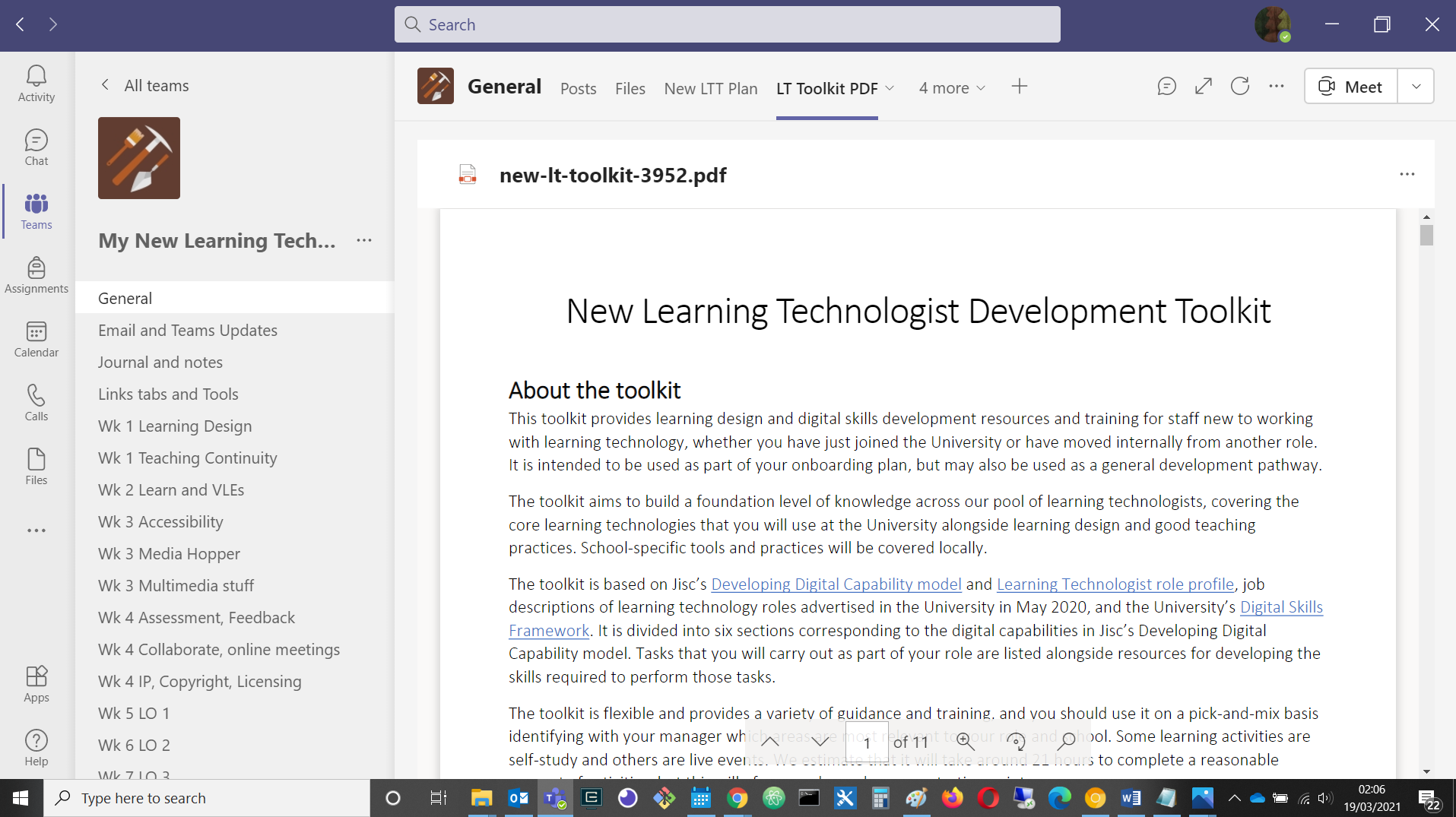 Copying the Planner from one Team to another

Copying the Planner was only partly successful. If you click the globe icon at the top of the Plan in Teams, you can open the website associated with it and copy everything except the file attachments from one Team to another, as long as you have enough access rights to both (see Planner screenshot 1):

Open the Planner in the Office 365 website to copy it

Where it says ‘Select a group’ to copy to, that will bring up a list of Teams you can copy it to. By default, the plan items’ labels, descriptions and checklists were selected to be copied. Dates and priority settings could also be copied, but attachments could not, at least in my case (see Planner screenshot 2): 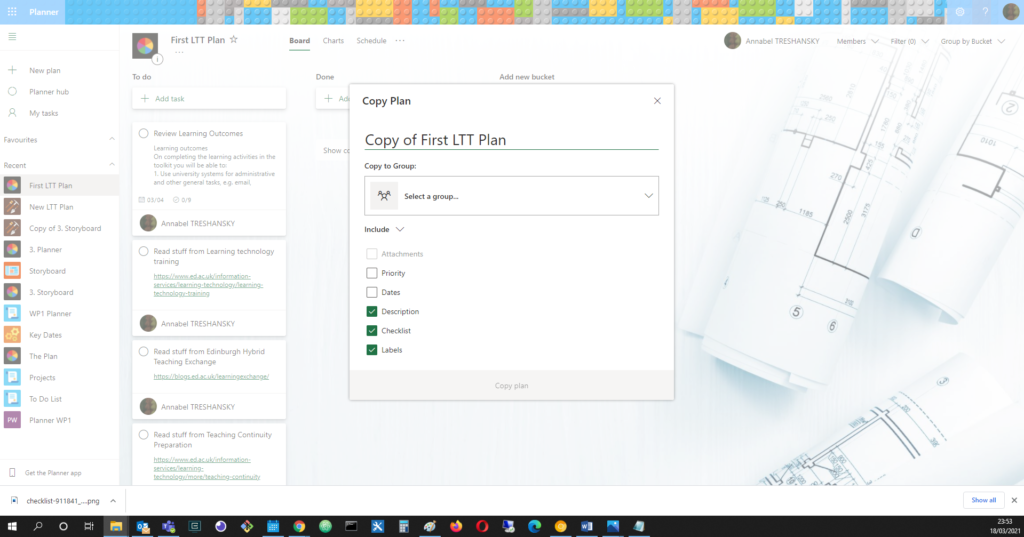 Options for copying the Planner in Office365. ‘Select a group’ lists the Teams you can copy it to.

Copying the Power Automate Flows was fairly straightforward. All I had to do was open each one on the Flow website, use ‘Save As’ to make a copy of it, and then change the details of the destination Team and channel.

With the Flows that didn’t involve my email account, I also made the Team a co-owner of the Flow, in case I might want to transfer them to someone else later. The Flows that the Team owns are the ones that will appear if you add Power Automate to a Teams tab, and if you create the Flow in a Teams tab, the Team will be a co-owner of it. On the Flow website, they will now appear in the ‘Shared With Me’ list.

The screenshots below show the process of copying and editing a Flow that posts a notification to an ‘Email and updates’ channel in my Team whenever a new training event is announced in the Learn User Group:

I also set up a nice encouraging Flow to cheer me with a post whenever I finish a task in the Planner: 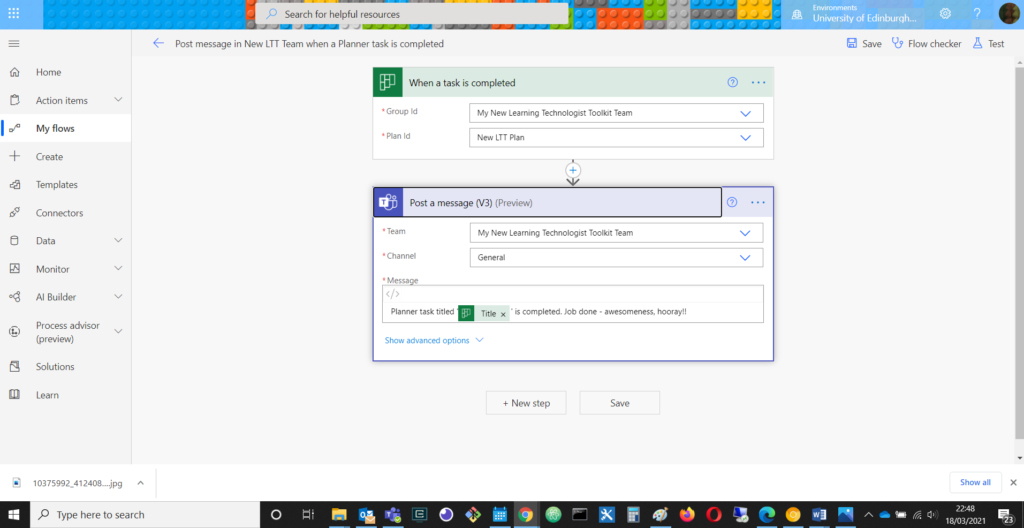 This Flow posts in my Team to congratulate me whenever I finish a task in my Planner. Hey, it’s the little things… 😄

Copying SharePoint Lists from one Team to another

It turned out to be the SharePoint Lists that were the trickiest thing to copy, although I figured it out in the end.

In theory, it’s meant to be possible to copy SharePoint Lists from Team to Team using this method described by ShareGate (2 ways to copy a SharePoint list to Office 365), however in our version / for me this method does not seem to be available or permitted.

Excel export and import should be another way to do it, however, this does not work for me either as data connectors are disabled for security reasons.

So how could I copy my lists?

First, I tried looking in Teams, but there was no option for copying anything more than a link to a single list item.

Next, I opened the SharePoint site and looked at the lists in Site Contents to see if there was an option to copy them there. Note the lack of options for doing that in SharePoint (see screenshot):

There’s my List, displaying in a tab in Teams, but there’s no option to copy it in SharePoint 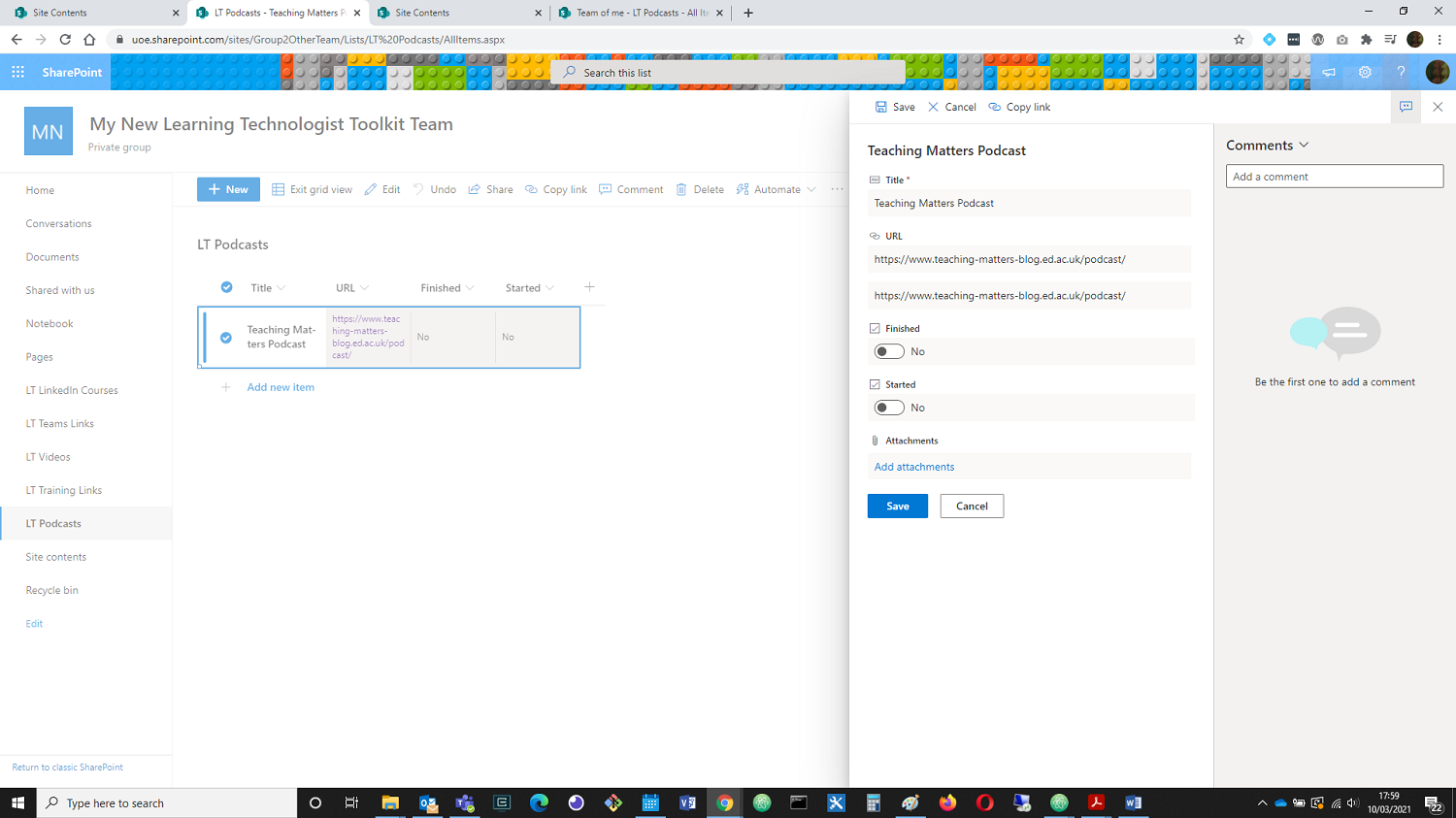 Another SharePoint list in Grid View: note the complete lack of ‘Copy’ options

So here is how I managed to do it:

Copying the OneNote Notebook to a new Team

Every SharePoint site has a OneNote notebook stored in Site Assets: 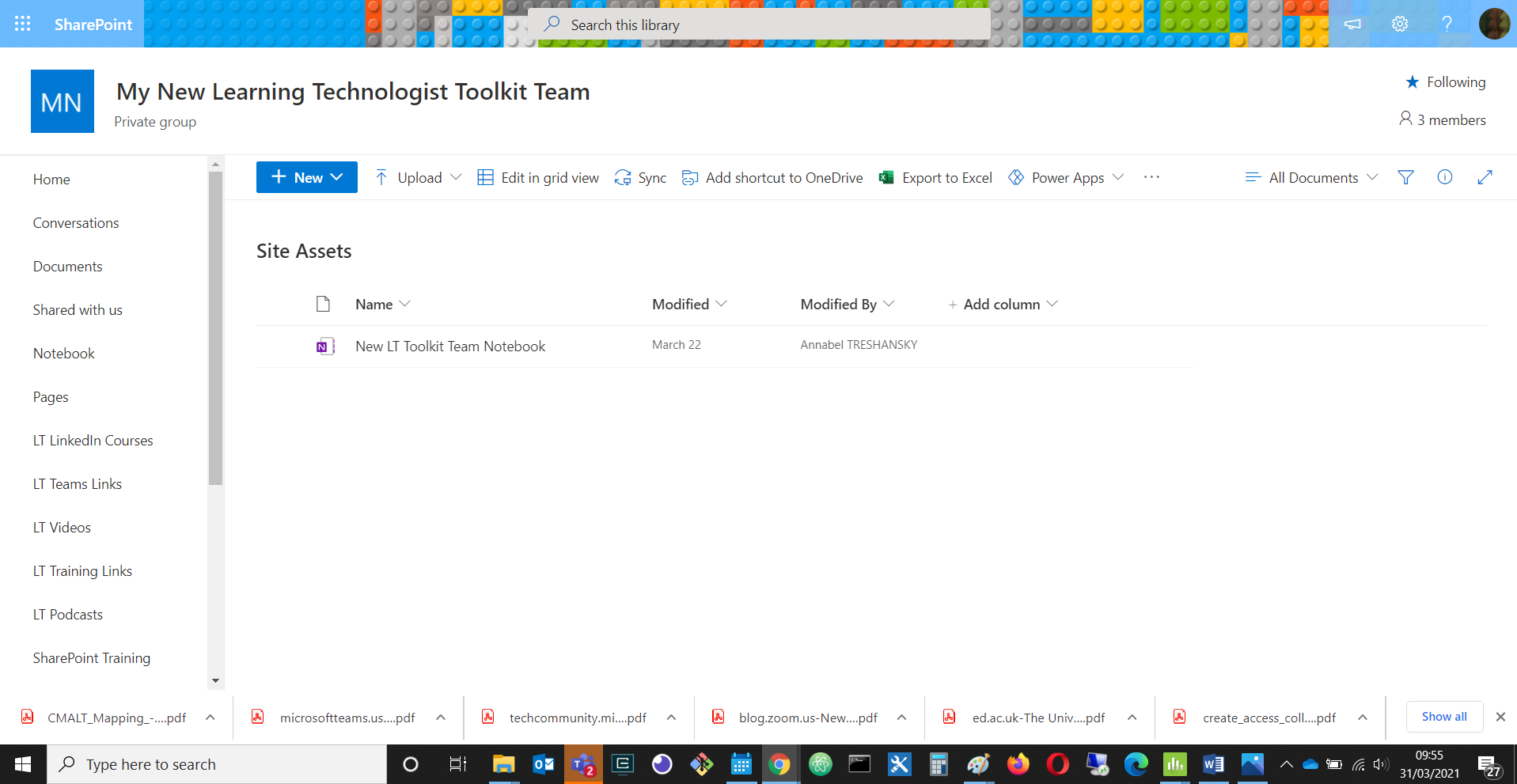 Here’s the new OneNote notebook in the SharePoint Site Assets folder for my new Team, surrounded by the golden glow of optimism and promise…

In my original Team, this was a ‘Professional Learning Community’ Notebook, chock full of management document templates. However, my new team was an ‘Other’ team type as I didn’t feel like I needed to manage myself that comprehensively. But I was interested to see if copying the notebook could be done, firstly because it could be useful to know, secondly to keep the few notes I had already made but delete the irrelevant stuff, and finally, in case I felt like micromanaging myself later – well really just out of interest.

I was also keen to know if I could back up my OneNote notebooks to some kind of personal storage as well, but that’s a quest for another day.

Firstly, I discovered I was not able to copy sections or pages from one notebook to another, but was only able to copy and paste a link to a page or section into the new notebook.

I did find a way to back up the notebook to OneDrive, which presumably would allow me to download it elsewhere as well, although so far, apparently only in Read-Only mode. They really want people to sync the notebooks from within the app, rather than making copies. 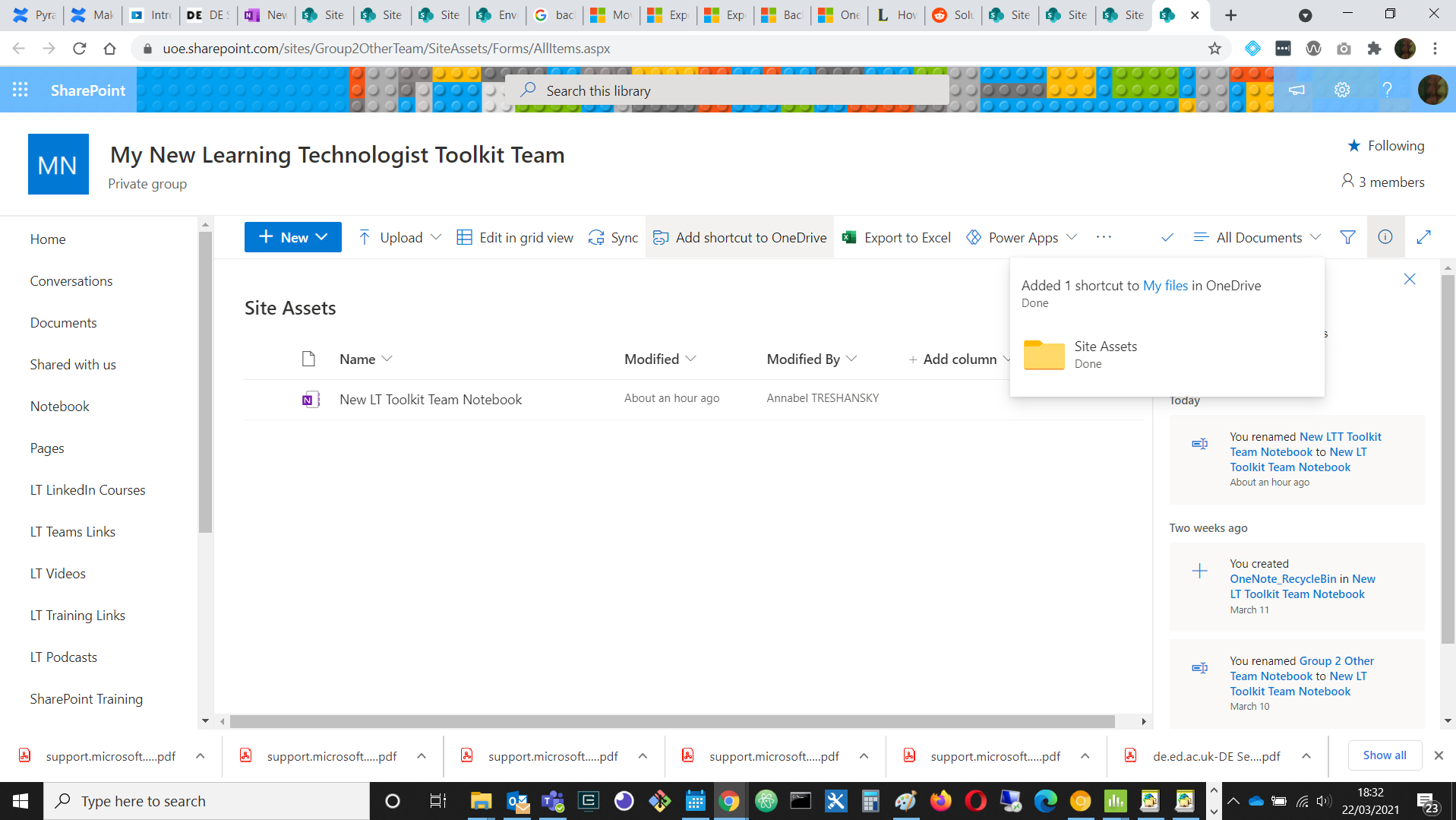 It’s possible to add a shortcut to Site Assets in OneDrive, but that doesn’t make the folder writable in OneDrive.

I also discovered a handy looking feature in the Desktop version of OneNote for exporting the notebook as a PDF – definitely another thing to try out later.

By going into SharePoint, I was able to copy the original OneNote notebook into the new team, but it did not become the default Team notebook. At first I wondered if this was because it was the notebook type for the other kind of team, but I don’t think that’s the most likely reason. Alternatively, it could be because SharePoint only allowed me to copy it into the Documents library instead of the Site Assets folder. 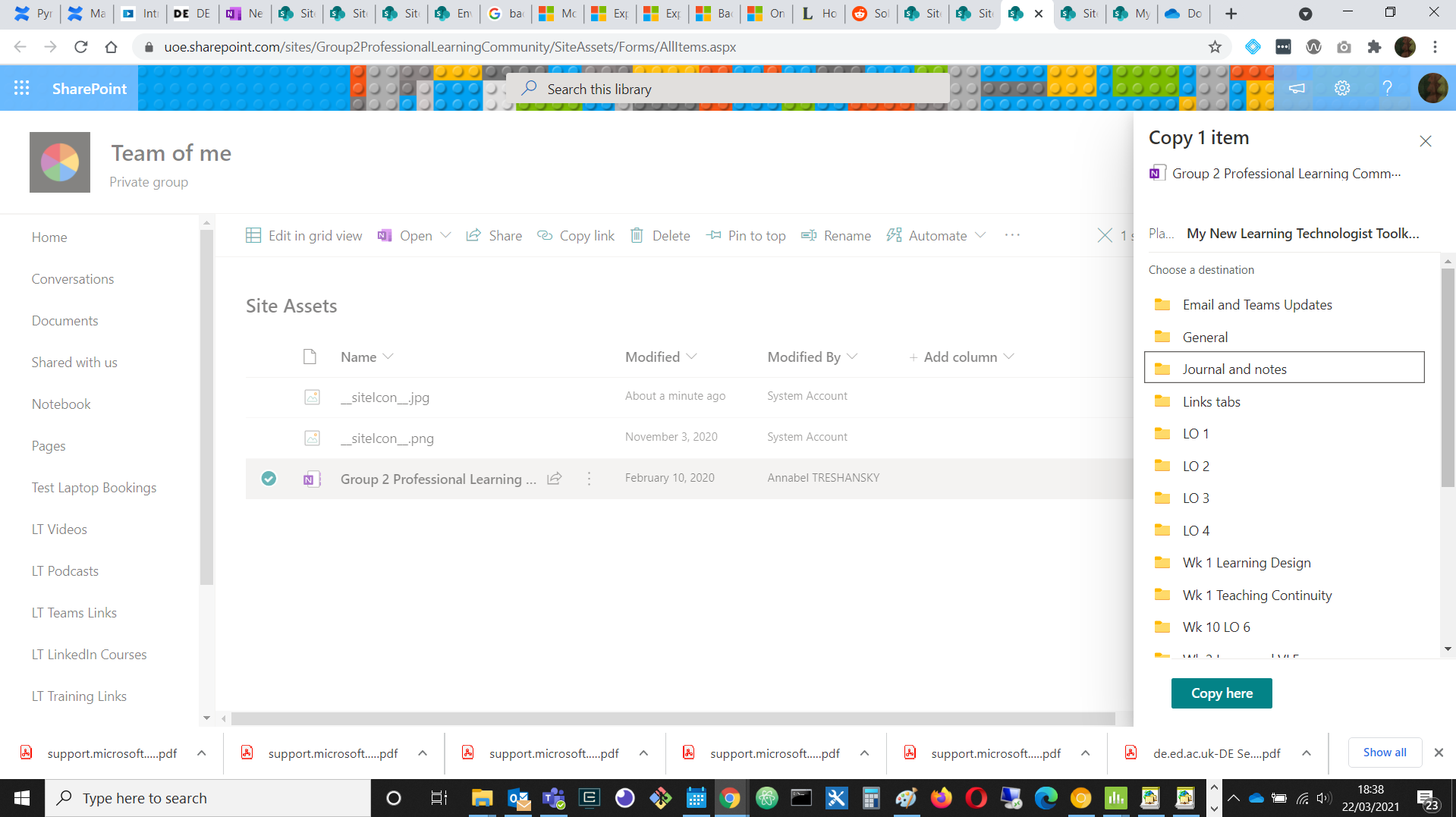 So close: SharePoint would let me copy the notebook to another Team, but only to folders in the Documents library, not the Site Assets folder. What, are my notes not an Asset?

I think it could probably be downloaded and then uploaded to the Site Assets folder via the Desktop version of OneNote, however, things did not go well when I started trying to export anything from the desktop version: 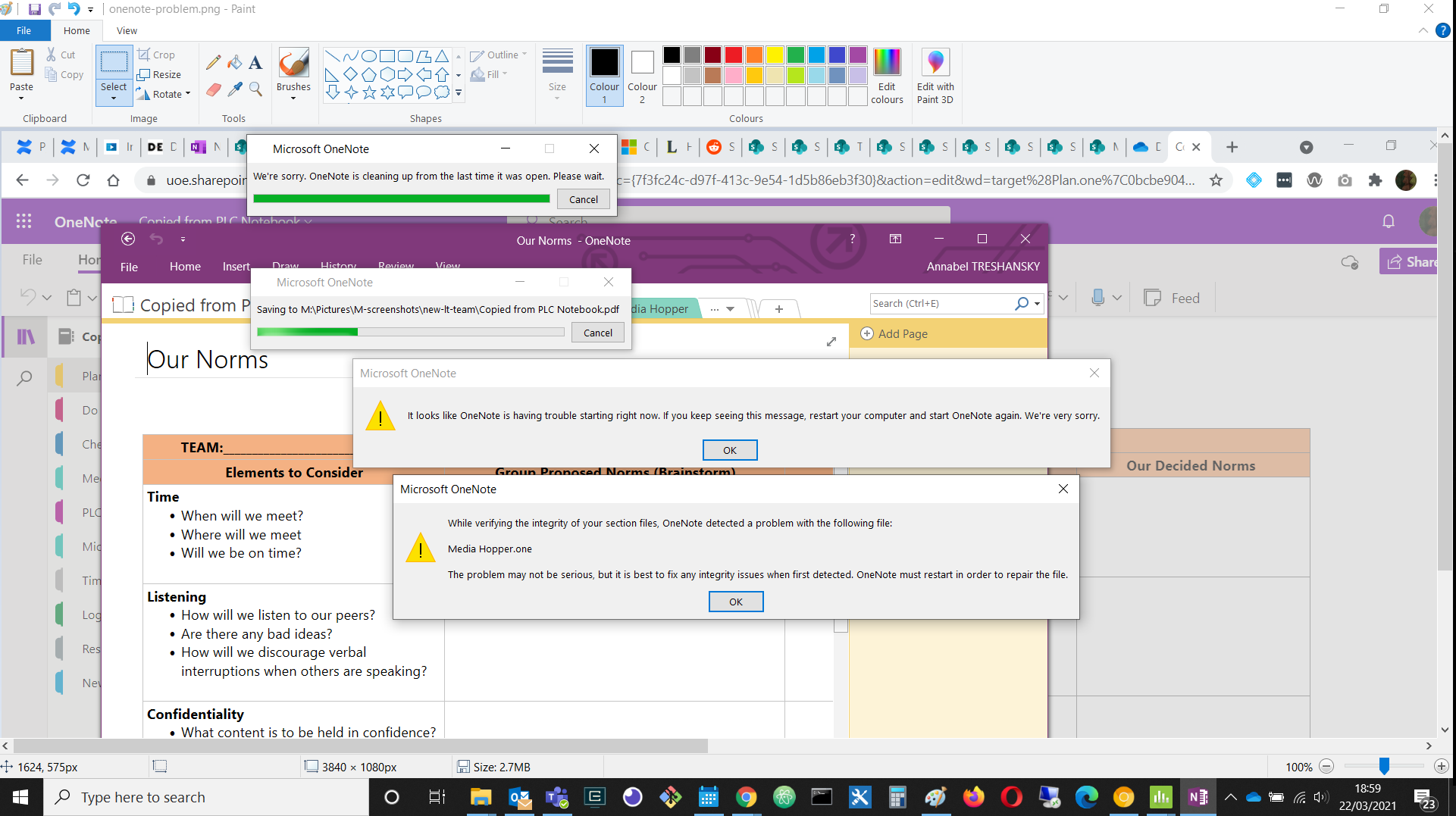 Uh-oh… I crashed OneNote so much that Microsoft are sorry. Even very sorry. If you ever feel like Microsoft should apologise, this is how.

In the meantime, it probably doesn’t matter that it isn’t the default Team notebook, because it was just as possible to add the copied OneNote Notebook as a tab in Teams. Click the + sign next to the tabs to add a OneNote tab, and then the list of your notebooks appears: 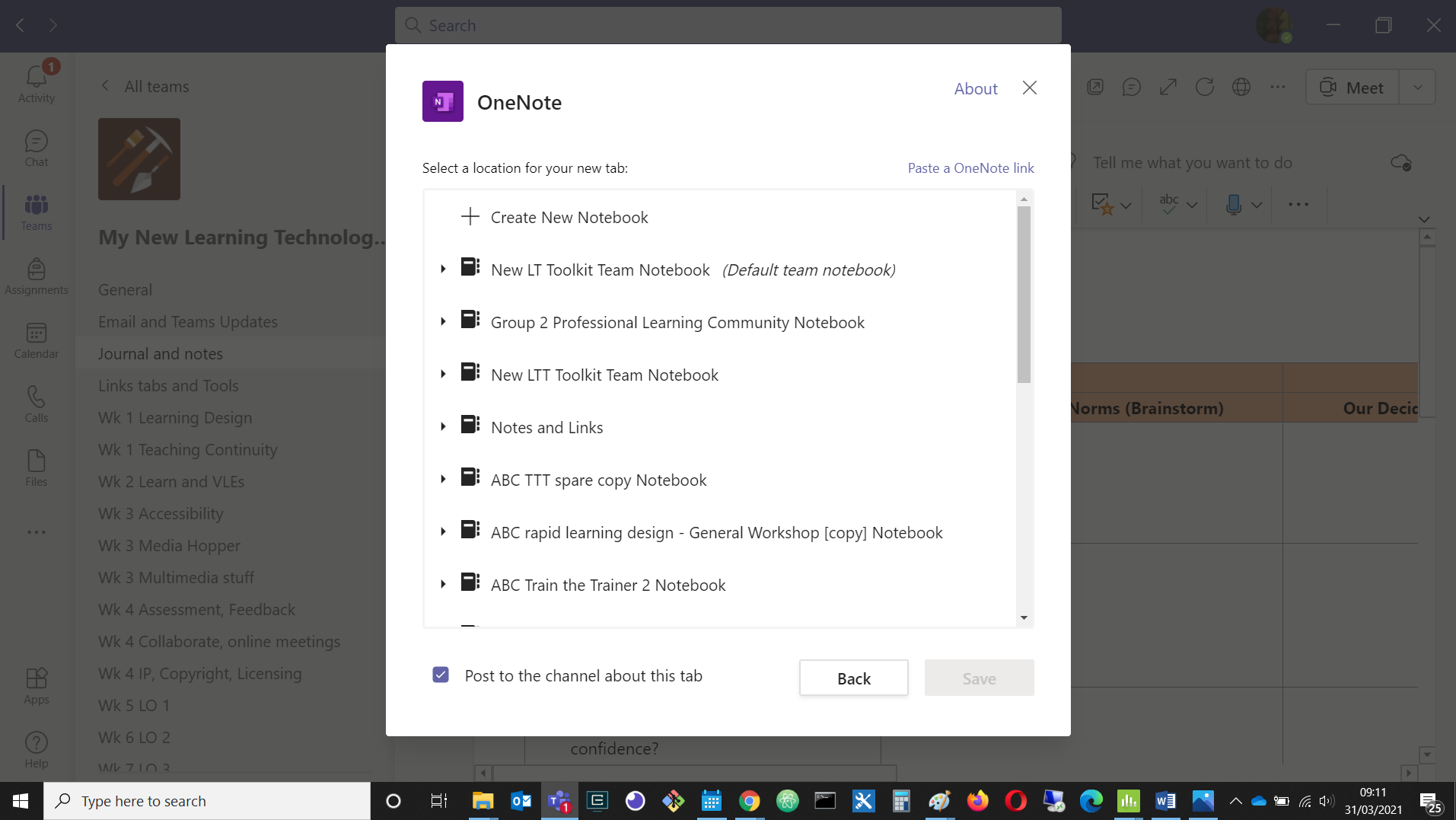 All these notebooks will probably be more useful now I can find them. Hopefully. 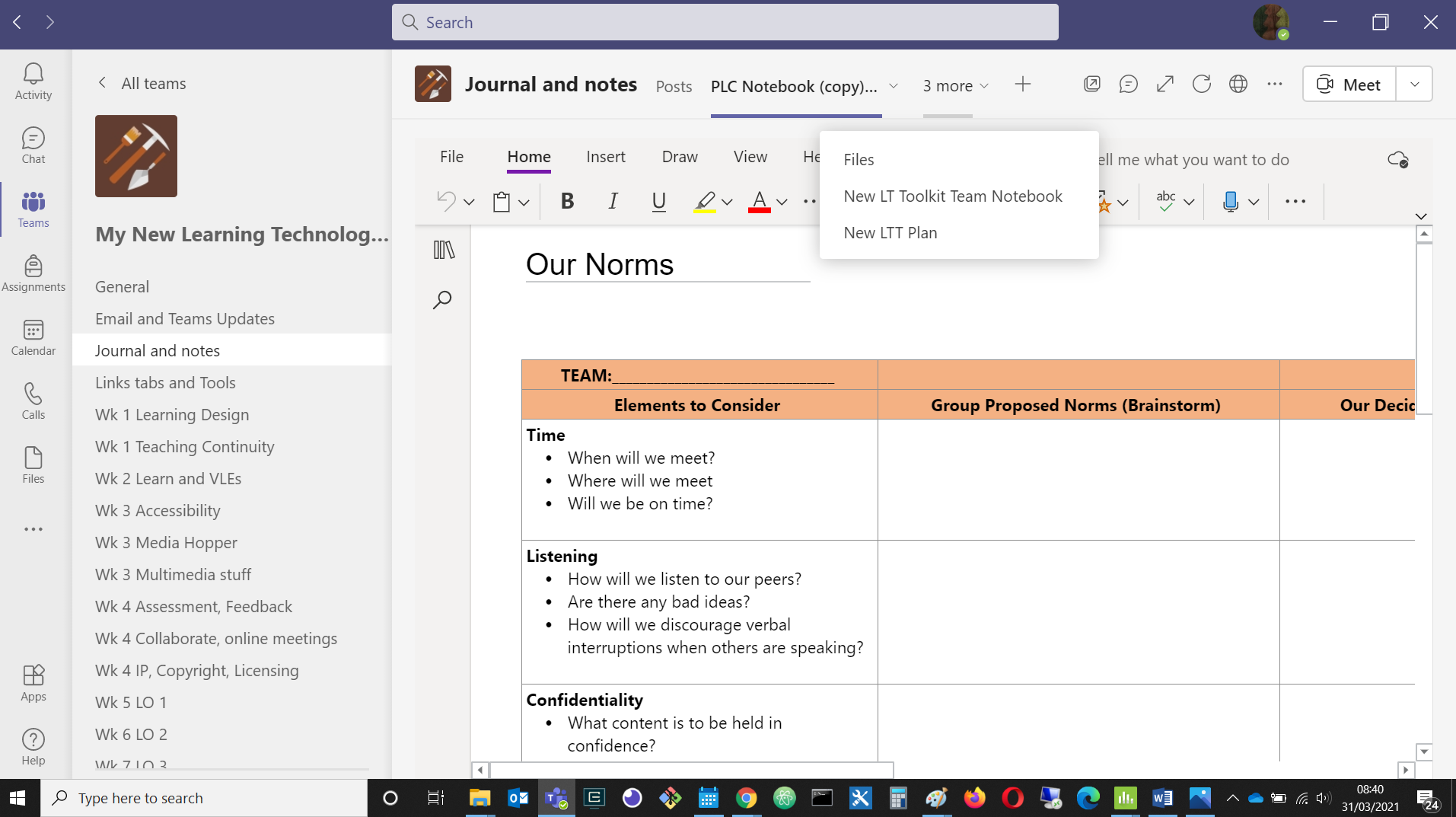 Both notebooks, now featuring in tabs in my new Team. Note the handy Plan, where I can brainstorm whether I have to listen to my own bad ideas or not. I probably shouldn’t.

Scheduling Meetings with the Channel Calendar in Teams

I really just added the Channel Calendar as an experiment after seeing it in the app list. Then I discovered you can schedule meetings with it. Having asked another team member to mentor me through this New Learning Technologist training, I scheduled a weekly meeting with her, and was pleased to discover it appeared on my personal Outlook calendar as well: 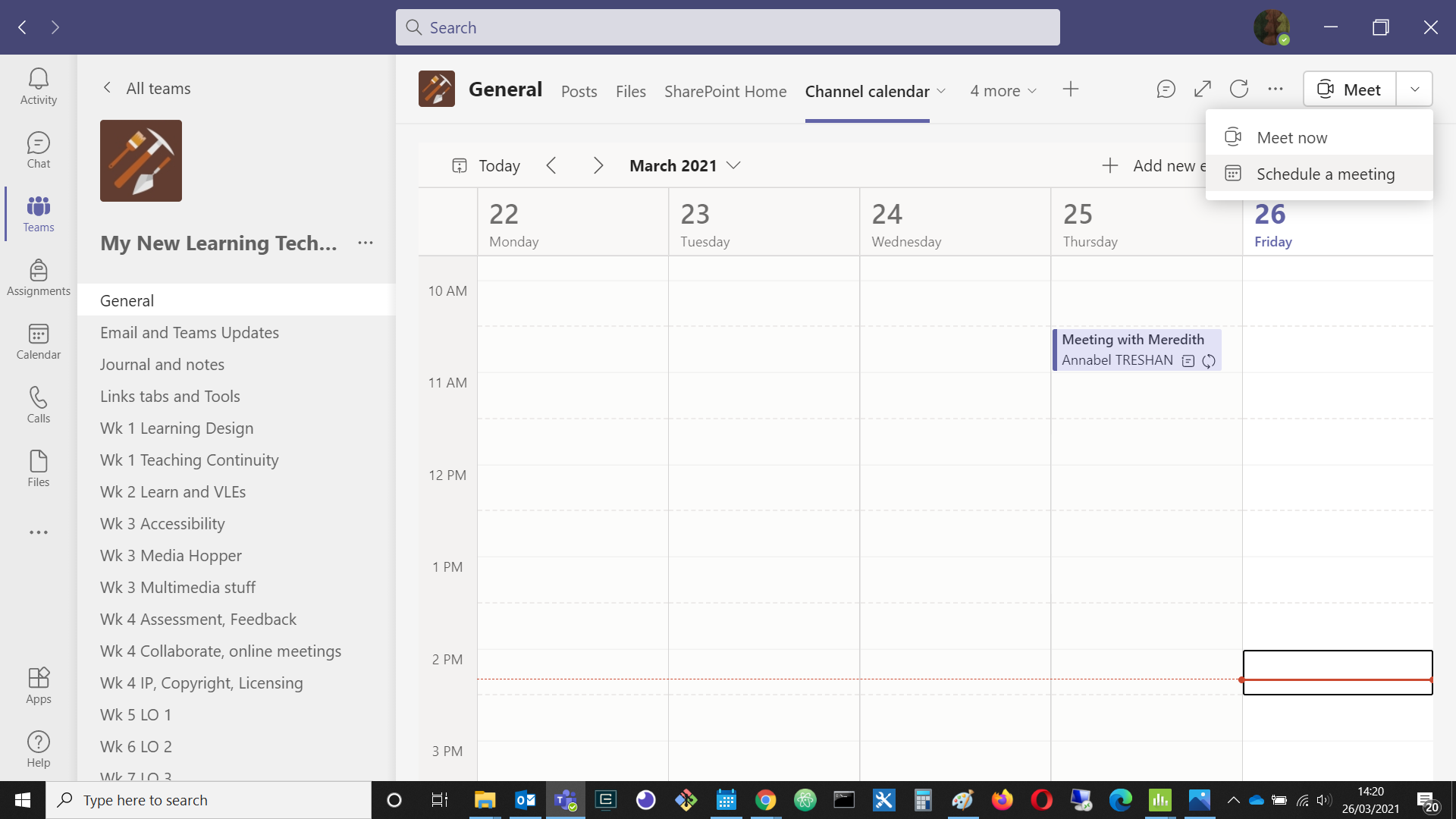 Scheduling meetings with the Channel Calendar, which is basically the same as my social calendar at the moment, so quiet in the pandemic when normally everyone would love to get together and talk about SharePoint

Adding the SharePoint site Home Page to a tab in Teams

Having looked around the Teams SharePoint site this much, I thought there might be some use in adding the SharePoint home page to Teams in a tab (ok, mostly because ‘SharePoint Pages’ exists in the app list as a handy way of doing this): 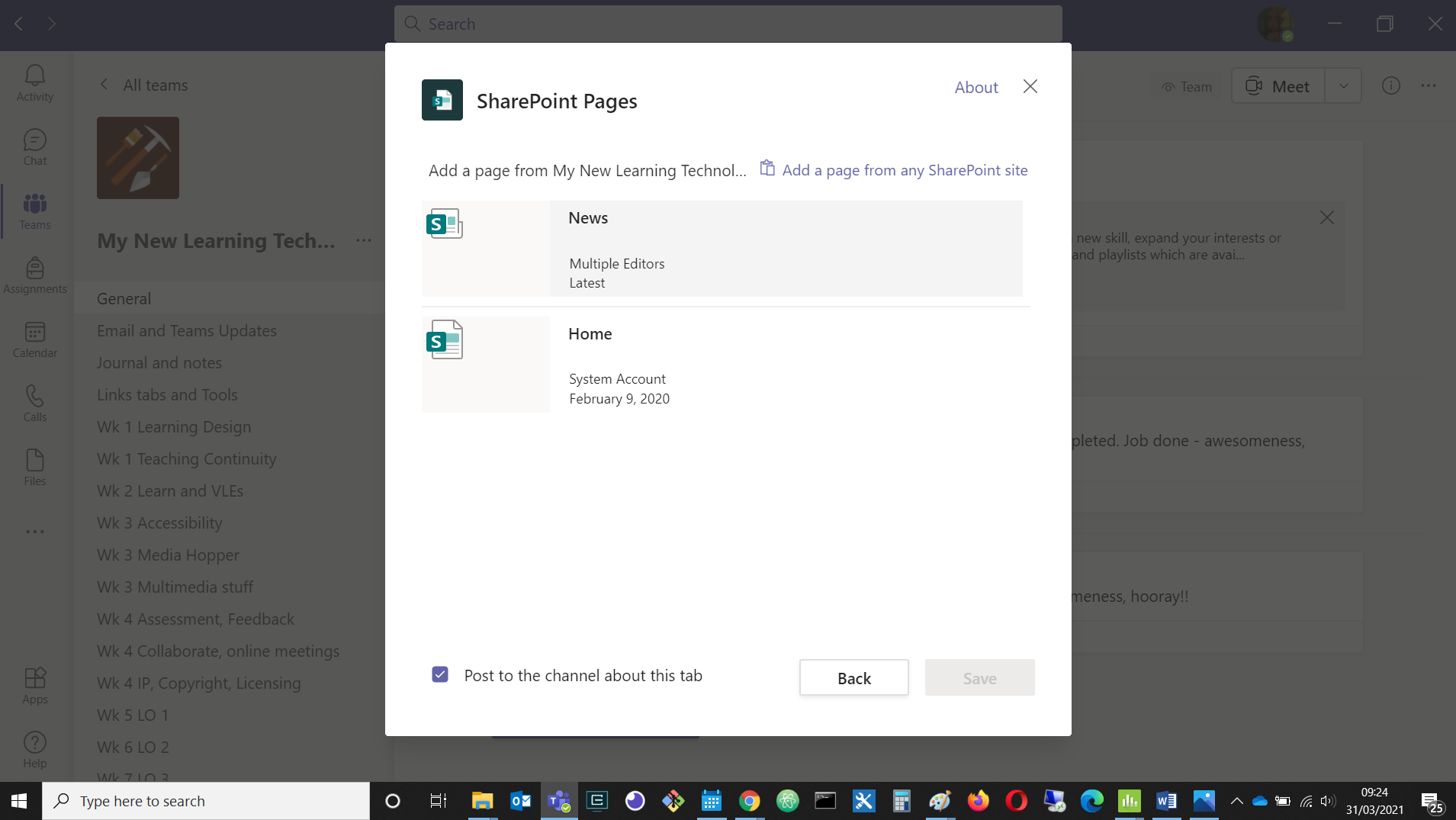 List of SharePoint pages that can be added to a Teams tab.
The ‘SharePoint Pages’ option basically does the pages part of what the ‘SharePoint’ option does but it’s so much more fun to try something different. 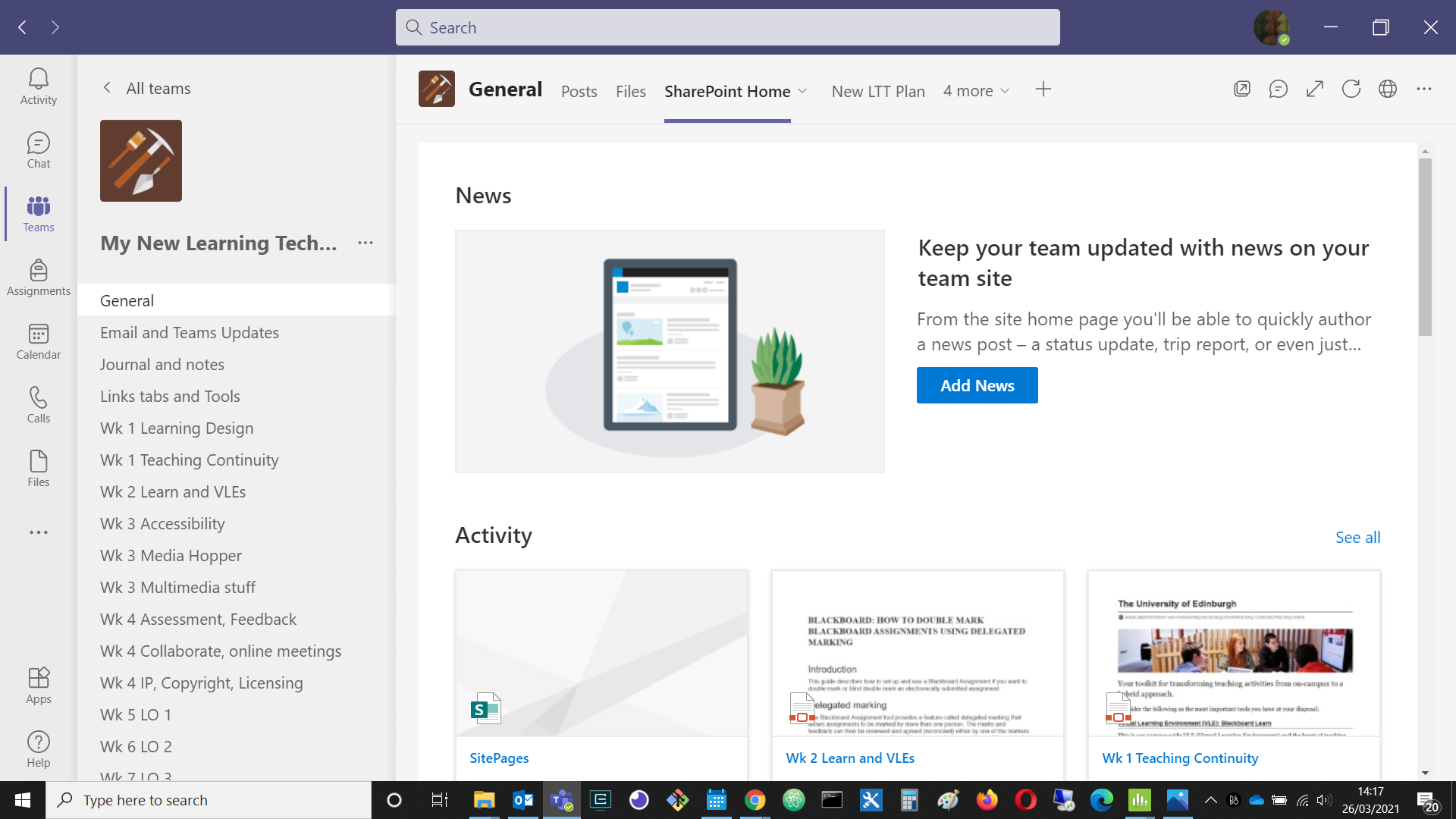 The Sharepoint default Home Page in a Teams tab – looks so full of promise doesn’t it!

I like the way it looks, and I can see some potential for motivation, reminders etc, but so far I am still stumped for the answers to two questions here:

I imagine there must be some trick for pinning tabs that’s easy when you know how. For now, I’ll stick with figuring out what to do with it first. Ideas and suggestions welcome in the comments, but that’ll be a job for later…

Copying Files, Flows, a Plan, SharePoint Lists and a Notebook from one Microsoft Team to another / Annabel Treshansky's Blog by blogadmin is licensed under a Creative Commons Attribution CC BY 3.0

How to get Live Captions for Anything with Google Chrome Canary