UK and Scottish coronavirus mortalities: how many more deaths will there be?

The UK and Italy have been following very similar COVID-19 pathways. Italy being 15 days ahead, the UK with worse mortality rates. Taking data from the cruise ship Diamond Princess at face value Neil Ferguson’s intervention, which altered the course of the outbreak in the UK, could well have saved 19,000 Scottish lives, rising to a quarter of a million across the UK as a whole. 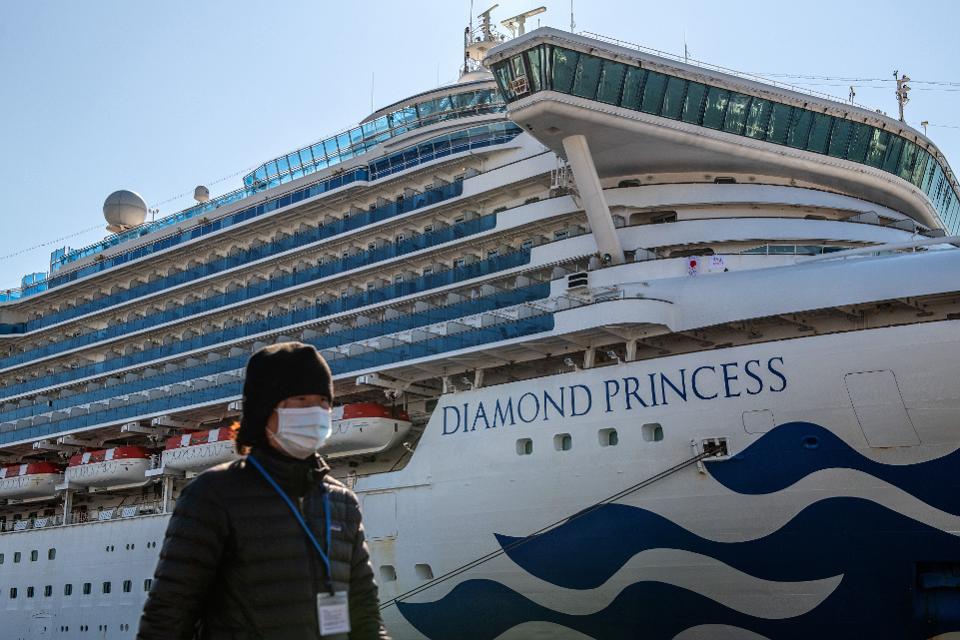 The coronavirus disease 2019 (COVID-19 for short) was first identified in Wuhan province China in December 2019. DNA analysis of a sample from an early patient has led virologists to conclude that the virus first arose on, or around, 24th November. Originally believed to have developed in bats or pangolins, genomic comparisons now suggest the virus is the result of a recombination of two different viruses. COVID-19 has since spread around the world causing countless deaths and economic mayhem. Modelling is central to forecasting its further spread, devising more effective counter measures, freeing up the global economy, determining vulnerability to a second wave and driving governmental policy.

There are three key modelling approaches used to forecast COVID-19 trajectories: epidemiological, agent-based and curve-fitting. As we will see my preference is for the curve-fitting variety. Ideally any model adopted needs to be simple and yet complex enough to capture all the most important effects.

Even the least involved, general purpose, epidemiological models require a considerable number of parameters in real life settings. Worse still, many of the parameter values need resetting through the event, e.g. as new intervention measures are brought in. The classic SIR model (Susceptible (not infected, but not immune), Infectious (infected and contagious) & Recovered (no longer infected, and now immune to infection, or dead)) is a mathematically elegant triad of equations. SIR simulates the passage of individual people through the main three phases (S -> I -> R) of an epidemic. Clive Best provides a lucid description of a stripped-down SIR.  A worrying defect of SIR models is that they can be extremely sensitive to small changes in either their assumptions or their parameters. Slight differences can be magnified in the modelling and in turn lead to strong disagreements between epidemiologists. Agent-based models follow the interactions and spread of a disease amongst individuals (“agents”) within a community. The model requires rules governing movement, mixing patterns, behaviours, risks, health interventions, policies, and so on. Again agent-based models are necessarily quite complex.

When trying to forecast the timing, or magnitude, of the peak of an epidemic, or the rate of decline of the tail, or the total mortality at the close of the first wave then I prefer a curve-fitting / mathematical-projection approach. In particular I find it helpful that there are fewer parameters to determine. This parsimony is particularly important given the poor reliability of the information we have at present on COVID-19.Throughout this series of blog pages I have been using a well-tested, curve-fitting approach, first used by King-Hubbert to study peak oil, and then modified slightly by Clark & Thompson to model the somewhat more intricate patterns of flowering curve trajectories. Technically I employ a generalised, skew-normal, with five unknown parameters. These five parameters have to be determined (“calibrated”) from the available COVID-19 data.

Let us look at the differences found when estimating casualties using two simple approaches, namely: Model 1: Back-of-the-envelope and Model 2: Curve-fitting. For Model 1 all we need to know are three numbers, and all we need to do is multiply them together. That sounds straight-forward. Better still, one of the three numbers is extremely well-known. The problem is the other two numbers are uncertain, despite a number of countries and provinces having already completely passed through the first wave of the COVID-19 pandemic. The three crucial numbers are total population, deaths after infection (i.e., case fatality rate), and the proportion of the population who become infected. We have

So there we are, in the absence of a vaccine in the UK 267,187 (= 66,796,807 * 0.5% * 80%) people will die directly from COVID-19, and many more will die from numerous indirect effects (e.g. delayed hospital treatment, avoiding visits to GPs, mental health problems, welfare resources being diverted into other areas.)

What about the second modelling approach? Using my skew-normal maths (lower panel in figure below) I project UK deaths (in hospitals) by the close of COVID-19’s first wave will total 41,362. 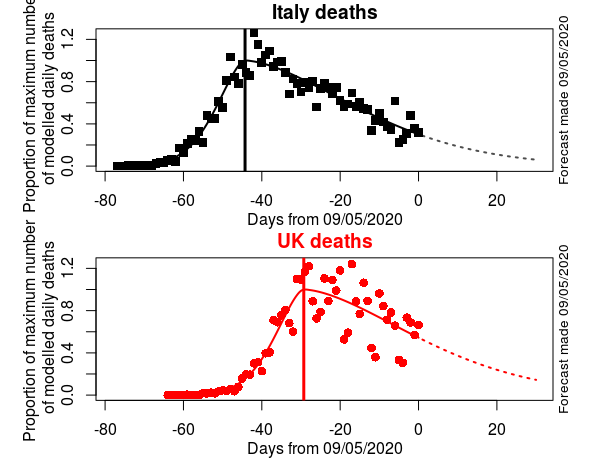 Comparison of curve fitting of Italian and UK deaths trajectories. (Daily deaths as reported in ECDC database). Dashed lines forecasts using 5-parameter skew-normal model. The trajectories of the two countries have remained remarkably similar in general shape, duration and skewness. Italy, on average, has been 15 days ahead. The UK populace has had to suffer a worse number of deaths per capita. Italy is modelled as peaking 34 days after the first recorded death, the UK 35 days. There is no sign of the Italian, or the UK, epidemics departing from the type of progression I have been forecasting over the past weeks of a skewed normal. Conclusion: watch Italy if you want to know how the UK epidemic is likely to progress.

But hang on. That model 2 total is much, much lower than the total derived in model 1. What went awry? Why is the gap so wide between these two rather straightforward approaches? Can the undercounting of deaths in hospitals (for a long time the official UK approach) account for the difference? No.

In short, my Model 1 with 267,187 UK mortalities can be thought of as the “herd immunity” or “Oxford” strategy that the UK Government at first decided it would actively pursue. Model 2 with 41,362 deaths is the “U-turn” or “Imperial College” strategy that Prof. Neil Ferguson had to fight hard to get the UK Government to accept. By delaying peak and flattening the curve Imperial College allowed the NHS to be able to perform better than the medical staff on the Diamond Princess. Time has been bought to develop a vaccine before herd immunity is reached. Time has been bought to introduce a tracing app that can reduce transmission by asymptomatics who don’t realise they are infectious. The difference between the two models (267,187 – 41,362 = 225,825) gives my estimate of the minimum number of UK lives that will potentially been saved. Of these roughly one quarter of a million souls over 19,000 are still alive in Scotland today.

The question remains: will future UK governmental policy favour lives before livelihoods? Or alternatively will the UK and regional Parliaments lose focus and unlock too early thereby causing the epidemic to re-emerge in a series of additional oscillatory waves or worse cause an even larger 2nd peak? Time will tell.

Personally, being in a higher-risk category, and having little faith in the UK Government’s level of understanding of COVID-19 ever improving, I am not planning to emerge from stringent self-isolation or from my fervent hand-washing any time soon.

Glimmer of hope XIX / Roy Thompson by blogadmin is licensed under a Creative Commons Attribution CC BY 3.0

COVID-19 and the Edinburgh congestion charge

6 replies to “Glimmer of hope XIX”