Coronavirus lockdown: the end is in sight!

The end is clearly in sight. Let me qualify that statement slightly – the end of phase 1 of the COVID-19 pandemic across Europe is definitely in sight. 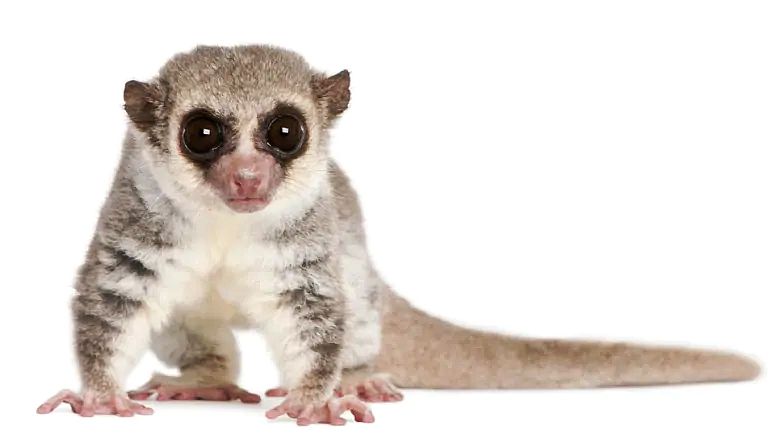 As we have seen in this series of blog pages epidemiologists find predicting pandemics to be a messy business. Let me try to explain why I am forecasting that the end is in sight.

The busy diagram below is my attempt to visually illustrate the current evolving situation of the world’s 12 most affected countries (and of Scotland).  Each coloured set of dots plots daily deaths for the last 25 days. The coloured lines are fits to the epidemic trajectories. Because cumulative deaths always increase as time advances from left to right, so the epidemics flow from left to right and diagonally down as the numbers of infections and deaths decline. The first thing to notice is where the straight lines meet the horizontal axis. These intercept points are the expected ultimate totals of COVID-19 deaths in each country, that is, the grand total (expressed as deaths per million people) when the last COVID-19 (1st phase) death has occurred. 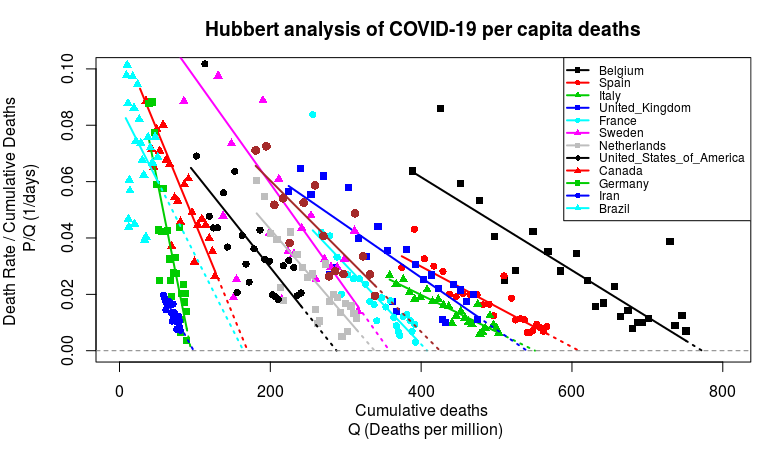 Hubbert predictions of final (per capita) death tolls.  Countries ranked (see legend) by total numbers of per capita deaths (as of yesterday). Scottish deaths added as brown dots and line. All data points are daily. For example the black square in the extreme lower right corner represents yesterday (9th May) in Belgium, the black square above the day before. Hubbert showed that a plot of Q vs P/Q can be used in a straight-line extrapolation (dashed lines) to determine recoverable oil-reserves, or in this example, ultimate deaths. Some of the data sets (especially USA, UK & Scotland) are rather scattered. Nevertheless reasonable projections forward can still be made.

Countries plotting towards the right-hand side of the diagram are faring much worse than those that plot further to the left. NB, death rates necessarily refer to the official statistics released by each country. In the fullness of time the death rates will be able to be adjusted to true excess mortality. However, at present, adjustment factors are poorly known so one has to work with the best data widely available (hospital-registered deaths).  Of course it is already well known that Belgium has probably been over-reporting by perhaps 20%, whereas the UK government chose to under-report (perhaps by 50% or more) by excluding deaths in care homes. Differences in reporting are disappointing but not totally surprising. There will always be a problem comparing death rates between countries because of the different procedures for determining the cause of death on the death certificate. The UK, for example, has quite strict rules.

Despite the recording complications huge differences in fatality rates can be seen in the plot. These life and death contrasts are most likely attributable to shutdown speed. Tardy shutdowns or, worse still, doing nothing in preparation for the pandemic and instead pursuing a policy of herd immunity have led to the sorriest statistics. The original UK herd-immunity policy envisaged the mass infection of tens of millions with COVID-19 and the deaths of possibly hundreds of thousands of the older and more vulnerable people in our society.

The straight line trends, which are easy to see in the plot, and are the key to reliable forecasting, arise directly from Hubbert’s virtuosity. I have been explaining Hubbert’s genius and prescience throughout this series of blog pages. By plotting Q against the ratio of P/Q Hubbert straightens out (linearizes in technical jargon) the classic bell-shaped curve. Hubbert’s P referred to oil production (barrels per day), his Q to cumulative production (barrels). Here P refers to daily death rate (deaths per day) and Q to cumulative deaths. The net effect is that the nasty exponentials underlying epidemics are straightened out. Turnings to the slopes, or gradients, of the Hubbert lines – the slopes might form the subject of a later blog page – the degree of slope relates to both the broadness and asymmetry of the peaks.

For estimating future trends nothing beats a straight line on a graph. Many of us (especially our politicians) seem to have great trouble understanding exponential growth. On the whole we are much better at coping with straight-line trends. I certainly prefer straight lines! Notice how we are so far through the epidemic that the Hubbert diagonal lines only need extending by a short distance (dashed lines) to arrive at the final counts. Table 1 summarises the output from the diagram. It tabulates the Hubbert forecast of ultimate (hospital-based) deaths in each country (i.e. the intercepts on the horizontal axis.)

Table 1. Deaths in the world’s most affected countries. Present situation and forecast. NB. Forecasting for countries with currently rather small total deaths (e.g. Ireland, Peru, Russia, Switzerland, Mexico) is much less certain than for the worst hit countries. In some it is not even clear that the first peak has materialised.

The graphics highlight how all the most badly-hit European countries are rapidly approaching the end game. The lower right-hand extremities of their straight-line trends are closing in on the horizontal axis.  Final outcomes will necessarily depend on future actions taken by individual governments. However, unless ridiculously crass actions are followed, the basic underlying trend will be predominantly determined by the characteristics of the COVID-19 virus (especially its infectivity and fatality rate). While other factors will have an effect, they are rather unlikely to put a major bend into the straight line extrapolations. The absolutely critical decisions were there to be made, or fluffed, at the very beginning and not in this closing ‘end-game’ phase.

A current modelling question relates to the shape of the right-hand tail of epidemic curves in Europe. Will it behave in a regular way and follow the smooth decline of a classic, Gaussian, bell-shaped curve? Or alternatively will it be annoyingly fat. (Long, fat-tailed, or heavy-tailed, distributions are encountered in a variety of areas: physics, earth sciences, economics and political science.)

I have been pleasantly surprised that my five-parameter model was able to predict the UK’s COVID-19 peak ahead of most other commentators. I first glimpsed the UK peak on April 6th (vague central clump of red vertical in final figure). Boris announced it only on April 30th. Also, on the whole, the model does a good job of fitting the broad shape of the whole curve. In hindsight the maths initially (April 11th) suggested a symmetrical peak would be adequate. (At the time there were two choices: the Chinese symmetric peak or the emerging Italian/Spanish asymmetrical peak.) However, once over the peak, when more data were available, the maths opted for the asymmetrical form (April 24th).

From at least 13 to 18 April Dominic Rabb (standing in for Boris) and his Chief Scientific Officer were continuing to talk about “a high plateau” and even that “the plateau may last some time … for two to three weeks”. Of course there never was a high plateau, nor any of the “spikes” that the media embellish make headlines. Policy seems to have been being made based on a very poor model.

Finally, as revealed in the diagram of the Italian and UK epidemics drawn two days ago (May 9th), the 5-parameter model continues to fit the ongoing, complete courses of epidemics extremely well.  So what about the tail?

My best estimate, at present, is that European epidemics are continuing to follow the regular decline expected of classic exponentials. That is to say there are no signs of worrying changes towards fat, extended tails. The situation is in our own hands. If the great majority of people continue to behave responsibly, then the end of phase 1 of the COVID-19 pandemic across Europe is in sight.

Glimmer of hope XX / Roy Thompson by blogadmin is licensed under a Creative Commons Attribution CC BY 3.0

2 replies to “Glimmer of hope XX”