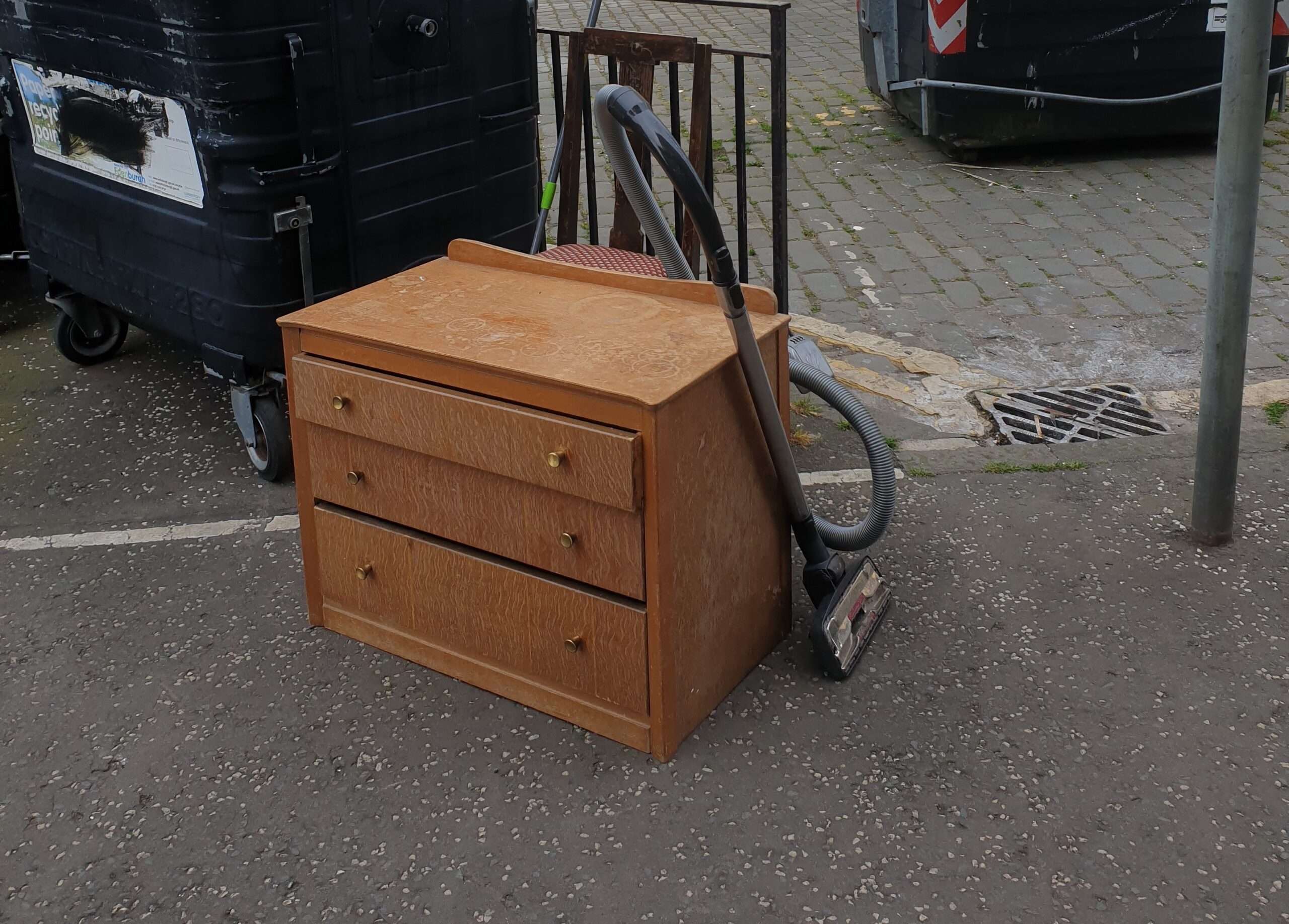 In recent years there has been a rise in societal awareness of the need for more sustainability and a general push towards creating a “circular economy” in which one person’s junk becomes another’s useful treasure. Internet based sharing sites, such as Freecycle, or Facebook Community groups, such as The Meadows Share in Edinburgh, have popped up to allow people to freely redistribute their unwanted items to those who might have use for them, thus reducing the amount of waste sent to landfill.  However, as Dr Jill Robbie noted in a blog post for Glasgow University Law School, the Scots law surrounding abandoned property is an impediment to the aims of the circular economy. Robbie is not the first to suggest that the law on abandonment is inadequate: the Scottish Law Commission in their Report on Prescription and Title to Moveable Property also highlighted the absurdity of the Scots position of bona vacantia, whereby the Crown automatically becomes owner of all kinds of useless things, including litter and broken household goods.

The principal problem for the circular economy with the law of abandonment is that anyone who sees something left beside a bin (like the chest of drawers in the picture above) and takes it home is technically stealing (Mackenzie v MacLean 1981 SLT (Sh Ct) 40). My great-uncle would have been shocked to learn that his habit of ‘skip-scavenging’ meant he was, in fact, leading a life of crime. But that is only if we characterise such items as abandoned property. Those who currently think the law requires reform may have overlooked a little known principle that could provide legitimate title to those who can make use of another’s rubbish: traditio incertae personae. In short, this is a “transfer to an uncertain person”. The original owner retains title until another person picks it up and assumes ownership. Thus, the property is never truly abandoned because the intention of the original owner is not simply to surrender ownership but to gift it to whomever wishes to have it.

According to Daube, in his article “Derelictio, Occupatio, and Traditio” ((1961) 77 LQR 382-389), this idea was first meted by the Romans. The Romans also posed it as an alternative characterisation to abandonment when discussing acquisition of discarded property. Unlike modern Scots law, Roman law took no issue with abandoned property becoming res nullius. Therefore, anything abandoned could become the property of another through occupation. There was no direct relationship between the original owner and the acquirer, nor was any necessary. However, the Proculians saw that this left an opportunity for a debtor, in concert with a friend, to cheat their creditors. If a debtor ‘abandoned’ an item (Daube cites the example of a precious jewel) their acquaintance could pick it up and become owner through usucapion, denying a creditor the ability to redeem their debt. Nor would the creditor have an ability to pursue the new acquirer because of the absence of a direct transfer. To solve this problem, by framing the debtor’s actions as a type of transfer through traditio incertae personae, the person who picked up the property would be a party to the debtor’s fraud as a direct transferee, meaning an action under the Actio Pauliana could be brought.

However, by the time of Justinian the original abandonment/occupation interpretation had prevailed against that of traditio incertae personae. Despite this, the doctrine has been inherited by Scots law, albeit tacitly and only in limited circumstances. Most references to the practice are hidden in footnotes, for example in the 1980 Scottish Law Commission’s Report on Lost and Abandoned Property at page 8, and its application has apparently been limited to the (fading) tradition of the Wedding Scramble, a practice where handfuls of coins are thrown by the father of the bride, or the groom, to crowds of gathered children. Typically, larger goods left at the side of the road (for instance, sofas and televisions) have been considered “abandoned property” and therefore bona vacantia: property of Her Majesty. It is doubtful whether she wants it. Yet it is precisely regarding these sorts of items that an interpretation of traditio incertae personae is most beneficial. The leaver of the property would be directly transferring title to whomever takes it. There is no longer an onus on the Crown to dispose of their newly acquired and unwanted property.

Extending the notion of traditio incertae personae to promote the circular economy is not without problems. For one, it would require the owner to have an animus transferendi: an intention to transfer, rather than abandon, title. In absence of a register of title to moveable property, the original owner of items left in public places is not readily traceable so ascertaining their subjective intention is difficult (if not impossible). Thus, it is easier to conclude that it was the objective of the owner to merely surrender title than to transfer it to someone else. However, given that Scotland does not permit previously owned property to become ownerless (hence the rule of bona vacantia), it could be argued that any attempt to surrender ownership is actually an attempt to transfer. If there is already an implicit intention to transfer ownership, why should it be taken to be to the Crown as opposed to someone who might have use for the discarded items?

That said, in the absence of an easily identifiable animus of the donor, any imputation of one to facilitate a characterisation of traditio incertae personae would necessarily entail a presumption of donative intent. This sits uneasily alongside Scotland’s strong presumption against donation. However, the presumption against donation is not absolute and there are already certain circumstances in which the law implies the converse, such as between close family members (Anderson v Anderson (1679) Mor 11509). Furthermore, “the strength of the presumption against donation will vary according to circumstances, and in particular, may be less compelling where the parties concerned are not wholly independent and at arms-length with each other” (Royal Insurance (UK) Ltd. V AMEC Construction Scotland Ltd & Ors [2005] CSOH 162 per Lord Emslie at para 22). There could hardly be a case where the parties are more independent of each other than one who anonymously leaves items in a public place and another, who is a stranger, who comes to claim ownership. Thus, there is scope for the law to substitute a presumption against donation for one in favour of donation in these circumstances.

A further benefit of this presumption would be to legitimise the title of the taker. One of the difficulties identified with the law of abandoned property by the Scottish Law Commission is that there is a good deal of ambiguity surrounding acquisition through positive prescription to moveables (as discussed in chapter two of the Report on Prescription and Title to Moveable Property). If there is a direct transfer through traditio incertae personae the taker automatically becomes owner without the question of prescription needing to be addressed. This could be seen as an extension of another presumption in Scots law: that of ownership based on possession. As this is “to provide a simple and convenient rule of evidence in the event of a dispute arising as to ownership” (K Reid The Law of Property in Scotland (1996) para 130) the same rationale seems fitting for acquisition based upon a transfer to an uncertain party. If there were any significant objection that could be raised to the taker’s acquisition of property, the presumption of the owner’s intention to transfer could be displaced if sufficient contrary evidence were provided.

It could be argued that abandoning an interpretation of abandonment would encourage dumping of goods and negate the possibility of ‘fly-tipping’ charges being brought under the Environmental Protection Act 1990 s 33. It could at least provide a spurious defence for accused offenders. However, in an entirely unscientific survey, this author has spotted no fewer than four sofas left next to communal on-street bins within a three-block radius of Edinburgh in the past two weeks, so it appears that the law is not acting as an effective deterrent. All the current position does is to place in doubt the title of anyone who has appropriated those sofas – appropriation which invariably has happened as all sofas disappeared within a couple of days of their appearance. In truth, most people see things left on the street as free for the taking. An interpretation of traditio incertae personae would legitimise what is already a common practice.

Some may feel that it is a stretch to apply an interpretation of traditio incertae personae beyond the original, limited application of the Wedding Scramble. However, if the goal of the circular economy is to “reduce, reuse, and recycle” it seems only fitting to reappropriate an existing legal vehicle to meet society’s, and the planet’s, changing needs.

Any takers? An alternative interpretation to abandonment to facilitate the circular economy in Scots law / Edinburgh Private Law Blog by blogadmin is licensed under a Creative Commons Attribution CC BY 3.0