Scotland vs. the United Kingdom

The trajectory of Scottish infections,caused by COVID-19 is found to follow the UK trend. Comparisons between regions with modest sized populations are, of course, problematic because the available data are scarce and very scattered. Consequently governments find it extremely difficult to decide on the leads and lags between the different regions of the United Kingdom. Nevertheless the statistical method I am using, which originated with King-Hubbert’s work on forecasting oil production and was extended by Clark andThompson to model springtime flowering (eg of Crocosmia), is very amenable to analysing the leads or lags between regional curves. The graph below compares the trajectories.

One assumption about the data used in the analysis is that the monitoring methods employed in the different regions are not grossly dissimilar. Here both  focus on monitoring subjects in hospitals, rather than in the community at large. [Interestingly the UK Government announced this very afternoon that it intends to start including testing in care homes in new infection reports.] An additional modelling assumption is that the trajectories have the same general shape but are offset in time from one another. 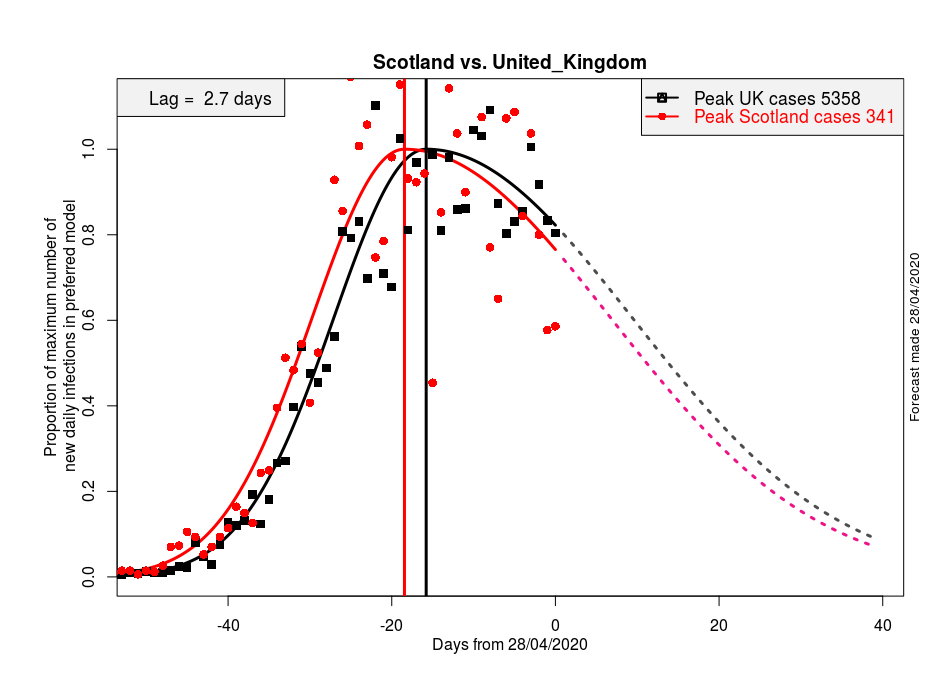 I conclude that there is very little difference between the two regions. Scotland’s epidemic perhaps leading in time by two to three days. The infection rates have been similar. Decline rates are similar. Scotland possibly slightly leading during the decline phase. At present, based on the prevalence of new cases, there is no reason to begin the unlocking process in Scotland at a very different date to that of the UK as a whole.

Patch of Crocosmia (and field note book) used in the Clark and Thompson (2011) Estimation and comparison of flowering curves study. (Photographed today, 28th April 2020, by CLT).

Glimmer of hope XVII / Roy Thompson by blogadmin is licensed under a Creative Commons Attribution CC BY 3.0