A tabulation of Scotland’s historical energy production (1850-2020) is very revealing (Fig. 1). It can help decide on near-term future actions that will be needed to maintain supply.

In historical terms offshore oil (50%), coal (25%) and offshore gas (20%) are found to have totally dominated Scotland’s energy supply (Fig. 1). However, coal production in Scotland has come to an end, offshore gas is rapidly running out (less than 10% remains) while offshore oil is similarly following a worryingly rapid decline. Offshore exploration is at an all-time low. Worse still no new frontier areas have been discovered in recent decades, so oil and gas production is most unlikely to be able to recover and come anywhere close to matching Oil & Gas Authority projections (of plentiful oil to 2050 and  beyond). Instead Scotland has chosen to pin its hopes on renewable wind power to generate its upcoming electricity requirements.

But what of future security of supply? Neither wind, nor batteries, can provide this. Currently, when the wind drops for a few days, continuity is provided by nuclear and by English natural gas power plants (via cross border inter-connectors). [5-day long shortfalls (i.e. total UK wind capacity continuously below 10%) are not uncommon, occurring on average four times every year.] Modern digital technologies, communications infrastructure, and industrial operations all depend on a reliable and efficient supply of electricity. And yet Scotland has a policy of no new nuclear. It has only one gas power station. Its geology is too poor for fracking to be commercially viable. (Scotland’s onshore shale rocks are too shallow, too carbon poor, and far too ductile and fault ridden). Where are supply continuity and the management of crisis situations to be found?

The only option seems to be for Scotland to recognise that it will have to change from its privileged position of energy supplier to becoming an energy importer (especially of natural gas) and hence will need to heavily invest in new gas power stations (for continuity of supply) and in carbon capture and storage (to meet its net-zero-by-2045 climate target). 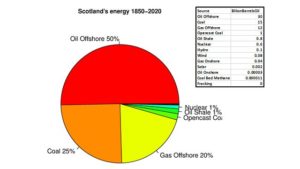 Scotland’s energy: past, present and future / Roy Thompson by blogadmin is licensed under a Creative Commons Attribution CC BY 3.0