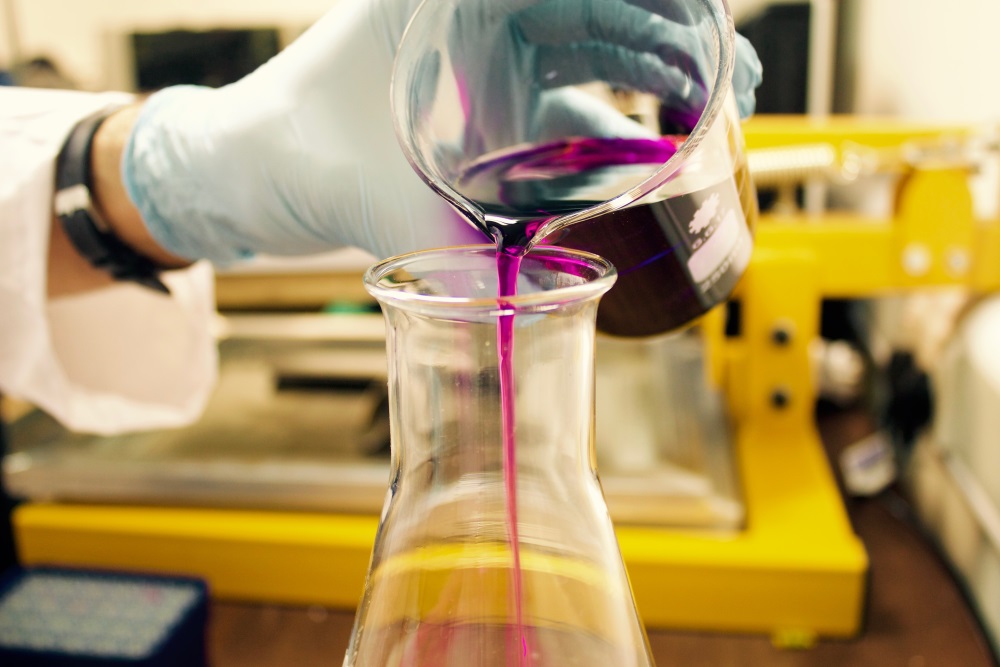 Former colleague Dr Keith Bromley reflects on his career at the School of Physics and Astronomy and his transition to working in industry.  He also considers how “becoming flummoxed by some of the easier tasks while proving successful in more challenging responsibilities” shaped his journey.

When I arrived at the University of Edinburgh in late 2012, I had pretty much decided I wanted to work in academia for the rest of my life. At least, I hadn’t seriously considered finding work outside academia at that stage. I had worked with two great principal investigators (PI) (Prof Stephen Mann at the University of Bristol and Prof Janet Oldak at the University of Southern California) and over the next few years I would work with another wonderful PI in Edinburgh, Prof Cait MacPhee. In each position, I was given a lot of freedom in my science and genuinely enjoyed the work I was doing, publishing several highly cited papers from each group. So why would I want to move away from that?

Despite my relative success, a common refrain came from those supervising my work. I tended to be good at doing the hard things, such as coming up with ideas and getting experiments to work, yet somehow seemed flummoxed by the ‘easier things’, like writing up the manuscripts describing those successful experiments or completing the proposals containing those good ideas. Don’t get me wrong, I did manage to write manuscripts and proposals – it just didn’t come as easily to me as it did to others. I worked on improving in those areas, but I still wasn’t ‘getting it’. I focused on trying to improve my skills in that essential area of academia, but I hadn’t yet seriously considered changing careers to play to my strengths.

That all changed around 2016. I had just missed out on a Royal Society University Research Fellowship and was finishing off the exemplification work for a patent I had worked on with Cait. The work on the patent was different to what I was used to in many ways and that got me thinking a little more about research beyond purely academic work, as much as I enjoyed that side of things.

Luckily for me, I was working in the School that housed the Edinburgh Complex Fluids Partnership (ECFP), run by Professor Wilson Poon and Dr Tiffany Wood. The ECFP had been working on many different academic-industrial collaborations since I had started and I was aware of all the work they were doing, but I had never been directly involved myself despite many opportunities appearing over the years.

One such opportunity arose through the ECFP to work with Wilson Poon and Genius Gluten Free on gluten free bread. It was quite different to what I was used to, both in terms of scientific content and research focus, but we developed a fruitful partnership that continued to go from strength to strength after my role on the project ended. Towards the end of the project, I solidified the idea that I would use the opportunities created by ECFP to help me build an industrial research ‘portfolio’ to help me move my career into industry.

Sure enough, another opportunity came up! This one involved working with Dr Job Thijssen on a one-year project with Mars Inc. Again, the work had a different ‘tone’ to academic work, but critically played to my strengths as Mars were looking for new insights in understanding microstructural features of some of their products. The project lasted two years as Job and I were offered another year of funding (after a successful proposal!) and I again ended the project feeling satisfied with the positive outcomes.

My next opportunity came via an Academic Industrial Meeting Day (AIMDay) organized by Edinburgh Innovations. Scot Bio, a biotechnology company based in Scotland, presented three scientific challenges they faced, and I was immediately excited by the project. Another successful proposal (maybe I wasn’t so bad after all?) led to a short but very successful collaboration as again I could rely on my strengths, without concern for my weaknesses.

By this point, I felt ready to make the leap away from academia. I was moving back to California for personal reasons, so the time was right. Happily for me, I was delighted to reconnect with Scot Bio and really enjoyed working as a part-time consultant biophysicist earlier this year.

As one journey ends, another begins and I have recently started a new position as an Innovation Scientist for Beyond Meat. It’s a wonderful place to work (everyone is lovely) and I’m relishing (pun intended) the scientific challenges ahead.

Reflecting on my time in academia, I feel blessed to have worked with so many excellent scientists at the Universities of Bristol, Southern California, and Edinburgh, but I know the move to industry is absolutely the right move for me. I’m just glad I found myself in a place that not only encouraged thinking about working in industry, but had set up the ECFP to give postdocs and PhDs the opportunity of getting their feet wet before diving in!

From academia to industry / School of Physics and Astronomy by blogadmin is licensed under a Creative Commons Attribution CC BY 3.0