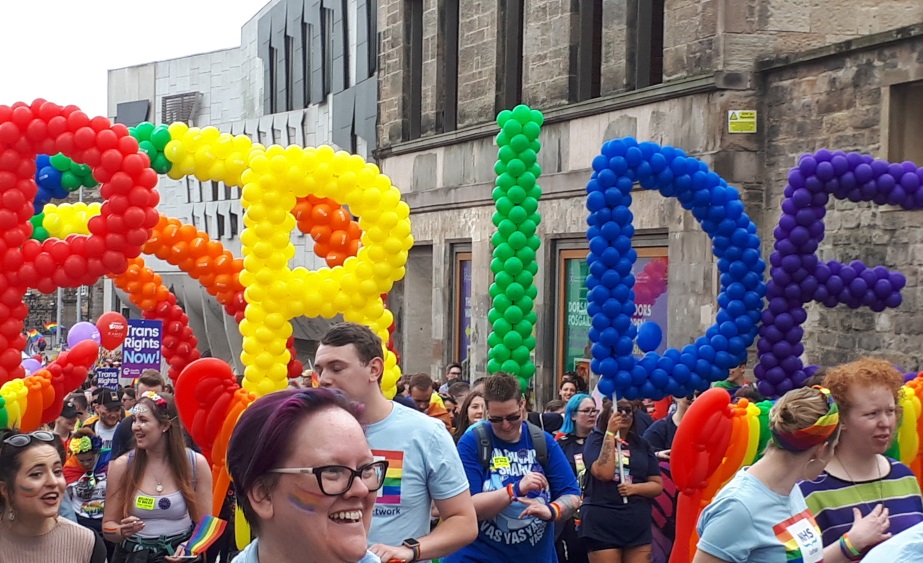 “This was my first Pride. I’m surprised at how wholesome it felt. I had a really great time.” School of Physics and Astronomy student.

Thousands of people, including students and staff from the School of Physics and Astronomy, attended the Pride Edinburgh march on Saturday.

This march provides a platform for politicians, community activists, and most importantly individuals to march through the streets of Edinburgh to celebrate diversity and personal identity. The march set off from outside the Scottish Parliament and continued to Bristo Square which was the setting for live music performances, community events and information stands.  The theme for this year’s event was ‘This is Me’ – an opportunity for everybody to celebrate their own identity.

PhD student Eoin, who organises the School’s monthly social event for staff, PhD students and allies reported: “Pride Scotia was a wonderful celebration of the queer community in Edinburgh. From the parade along the Mile to the celebration at Bristo Square and Teviot, so many aspects of the community were to be seen. I would definitely attend this event again next year.”

Pride marches have taken place in Scotland since 1995, initially alternating between Glasgow and Edinburgh, with annual marches taking place in Edinburgh since 2003.

This month sees the 50th anniversary of the Stonewall riots.  The fusion of social and political movements and routine police raids on gay bars in 1960s US fuelled tensions within LGBT+ communities.  The riots at the Stonewall Inn in 1969 are seen as the galvanising force for LGBT+ activism, leading to the annual worldwide Pride events we see today.

Find out more about networks for students and staff by visiting PrideSoc or the Staff Pride Network.

Celebrating diversity in the city / School of Physics and Astronomy by blogadmin is licensed under a Creative Commons Attribution CC BY 3.0