In the next instalment of our series exploring Korean Studies at the University of Edinburgh, we introduce Kang Su Hyun, who is a tutor in Korean language. Su teaches the Korean language modules which can be taken as optional courses in the MSc degree in Korean Studies: Korean Language Beginner 1 and Korean Language Beginner 2. These courses are aimed at absolute beginners in the Korean language, seeking to enable students to read and understand simple texts written in Hangul, the Korean alphabet, understand basic, natural spoken Korean and communicate themselves in situations of daily routine, and observe basic Korean cultural customs.

We spoke with Su about the importance of learning Korean, the challenges of learning a language, and how students of the Korean language can supplement their studies with the wide range of Korean media on offer from various sources. 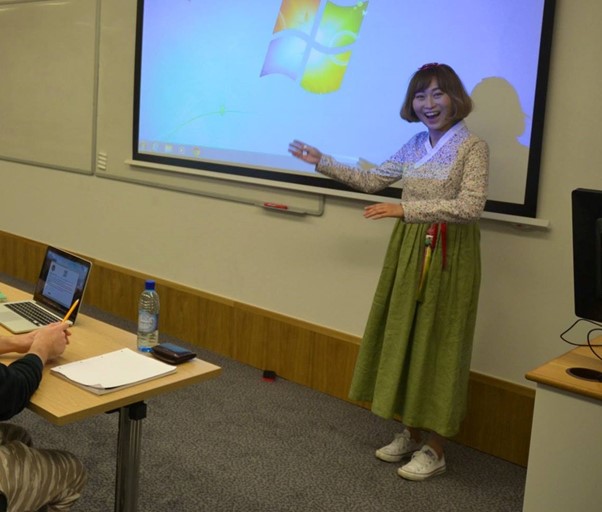 Scottish Centre for Korean Studies (SCKS): Why do you think that language learning is so important for Korean Studies students (and, by extension, students of other area studies disciplines)? In particular, how might learning Korean complement a student’s wider understanding of Korea?

Kang Su Hyun (KSH): I think every country’s language contains the identity of the nation. During the time Japan colonised Korea, they tried to get rid of Korean identity by, first of all, taking away the language. Korean people were obviously not willing to do so, and many of our ancestors sacrificed themselves to save our language in their independence struggles. The language is not only the identity of who we are, but it contains our past and our future, and tells who we are basically as a Korean. Therefore, to study anything regarding Korea or Korean, whether it’s politics, music, philosophy, it all links back to Korean language and to understand Korean language gives a deeper insight into any topic related to Korea.

SCKS: That’s really true, and especially from an academic perspective, being able to look at sources and texts in Korean, as opposed to in translation, can be very valuable as well.

KSH: I guess also if you were studying anything regarding those parts, if you, obviously, know the language, it would be quicker to understand. That’s the biggest benefit, I guess!

SCKS: Absolutely, it removes a step that has to be done. Looking at the Korean language itself, Hangul, the Korean alphabet, is quite commonly described as being very easy to learn, or quite quick to learn, but that’s really in terms of the alphabet itself – that doesn’t extend to mastering Korean as a language. Could you describe some of the key challenges of learning Korean more broadly for speakers of other languages (e.g. grammar, vocabulary, marker words etc.)?

KSH: The Hangul alphabet is actually very easy to learn and only takes a few hours to master, I would say. I love this story actually: our King Sejong who first invented our alphabet, Hangul, said, “if you are wise, you can memorise Hangul by lunchtime, if you are not, then you will memorise it by dinner time” basically, which is my favourite story. 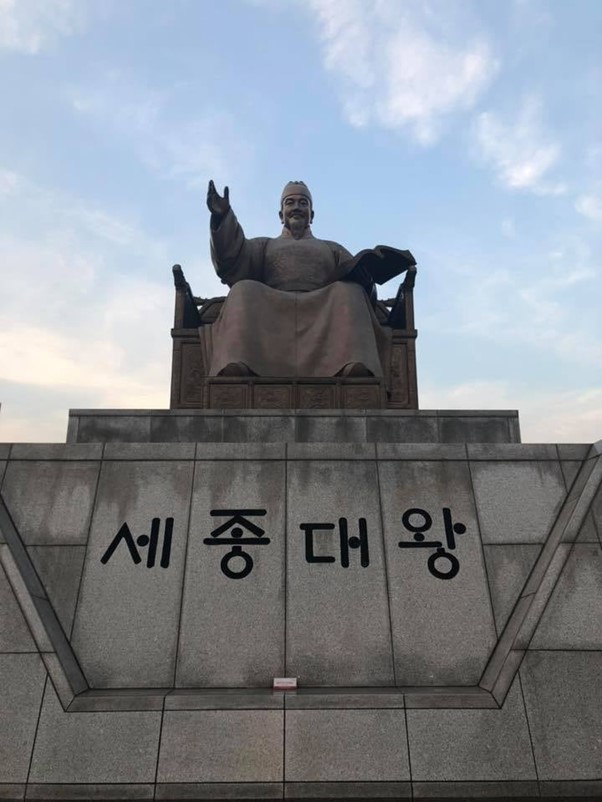 A statue of King Sejong the Great in Seoul, South Korea.

As complete beginners, used to European languages, these are some difficulties through the learning process: first of all, maybe, the sound and intonation is not familiar for them, of course, it’s nothing like European languages, and the grammar order is different, of course, compared to English or any other European language as well, and also, European languages have similarities so you can presume the meaning of some new words you hear, but you can’t apply the same thing to Korean, so it does feel very strange to begin with.

SCKS: That can certainly be true – for example, when learning French as an English speaker, because French is more connected to English it’s easier. Whereas with Korean you’ve got to get to grips with quite a few differences, and as you say the intonation, some of the consonants in particular, is quite tricky for English speakers and speakers of other languages.

KSH: Some parts of the vowels, such as the 으 (eu) sound, I find some of my students struggle with in the beginning, and also the 어 (eo) sound as well, and the sounds can be somewhere in between.

SCKS: Linked to that, when learning a language you have to be quite committed, not only in terms of the time that you spend revising, or going through vocabulary, but also in terms of consistency – frequency of going back to what you’re studying, but you also have to be able to, or willing, to practise, but also practise and make mistakes and be corrected, in order that you can learn. From your own experience of not only teaching Korean but also learning other languages, what would your top tips be for language students? Specifically in terms of the Korean language course at Edinburgh, what do you hope that students gain from that?

KSH: First of all, my top tip is to make learning language and culture a part of your life. Learning a language is like being married or going on a long walk, it’s not a sprint so you don’t have to rush it, however you need to be committed to it to make it become part of your life, basically. You adopt another culture in your life, perhaps.

People come to class for various reasons, perhaps some of them are very into K-pop, or K-dramas, or some people are very into the unique political situation of North and South Korea, or they want to work for a Korean company. But my biggest wish is that learning Korean becomes a tool for them to discover a different side of Korea they can be passionate about for a short time to, ideally, long-term. 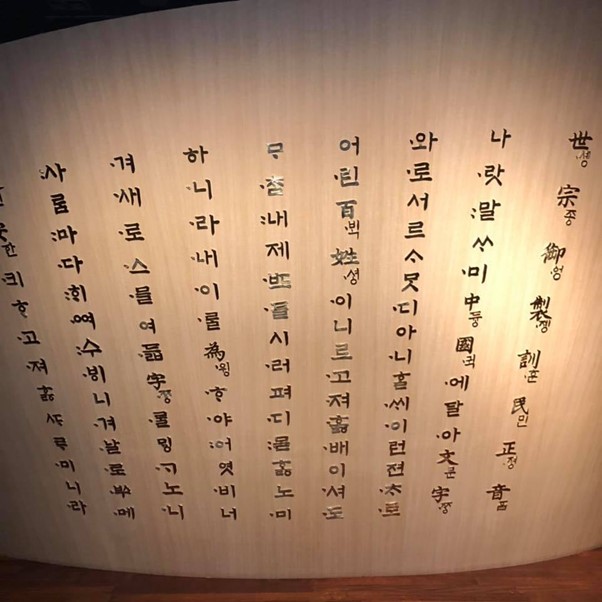 Hangul and Hanja text at the National Hangeul Museum in Seoul, South Korea.

SCKS: What’s nice about the Korean language courses at Edinburgh is that you get that cultural understanding as well, and you get to discover Korea through the language, which is a really good gateway and complements the other courses really well too.

Connected to that, a lot of people are interested in Korea and the Korean language at the moment because of the Korean Wave, it’s obviously very frequently discussed in the media, massively at the moment with “Squid Game” being one of the most popular shows that Netflix has ever had, and students of Korean are really lucky because they actually have very easy access to films, music and TV shows in a way that learners of other languages might not have quite so easily. In terms of the language learning that students do in class, are there any ways that students can use these resources really well to complement that learning?

KSH: Korean dramas or movies you like can be a great resource, as you have a chance to use the language in daily life. You can watch with subtitles, then watch it again with them off, and watch over again, ideally several times more, and then after that I would suggest to maybe pick up your favourite lines and repeat after them. If you are a beginner one or two lines are fine, but as you advance you could add on more lines. Don’t just copy the lines, imagine you become an actor or actress, imagine you are acting and shadowing the tones and intonation, it is good fun.

SCKS: That’s really helpful in terms of listening, because as you said the intonation can sometimes be quite difficult for Korean language learners to master, so actually hearing people speak, and speak naturally, is really valuable in terms of how the language is spoken in real life, it’s quite helpful.

KSH: I find that songs can be a bit tricky, songs can be quite poetic and are maybe a bit more difficult for, especially, beginners, but sometimes short phrases repeating, like in K-pop, it’s very addictive and catchy, in those parts maybe you can pick up your favourite song and it can become easy to remember if you sing it enough.

SCKS: Have you got any personal or current recommendations for students of Korean – any films or TV shows that you’re enjoying at the moment that you think would be really good for students to watch too?

KSH: Especially beginners, they generally really need to focus on textbooks to build up their basic vocabulary and basic grammar, and usually textbooks come with those vocabulary CDs or conversations, recorded voice films, you should really focus on that. But once you have the basics, as well as getting pure entertainment from it, I would suggest “Squid Game” or “Parasite”, I recommend, and also one of my favourite popular dramas is “Crash Landing on You” which is a very interesting drama, so you can feel and hear the difference between North and South, of course including accent, the difference in accent for North and South Korea as well. Another recommendation is “Reply 1988”, “Reply 1994” and “Reply 1997” – it’s a drama series, if you’re a big fan of K-dramas you probably know about these dramas. They show ordinary stories and ordinary conversations, and of course you can pick up some different accents from different regions of Korea as well, that’s my favourite part, but it’s not violent, it’s just sometimes so ordinary, it feels comfortable to watch this all the way through. So you have a choice, if you’re excited about it, maybe you can go for “Squid Game”, if you want to chill out, maybe go for this series.

SCKS: That sounds good. The other good thing about watching K-dramas is that they can give an insight into different parts of Korean society, obviously “Squid Game” and “Parasite” are quite similar in terms of some of the themes that are being brought out, but they’re not the only interesting themes or topics about Korea, so being able to access different types of media is really good as well. Korean language learners are very lucky to be able to get these kind of shows on Netflix. We’d definitely recommend that students take a look at some of these resources.

We would like to thank Kang Su Hyun for talking with us. Look out for future interviews and social media posts in this series to find out more about the Korean Studies department at Edinburgh, academics and tutors, current research students, and the postgraduate courses that are on offer.