Interrupting the conversation: Inserting social inequality into a discussion about suicide

In this post I reflect on an instance of interrupting a discussion about suicide. I explore how asking different questions about the relationship between suicide and social inequality allows for different kinds of engagements with suicide.  These kind of interruptions are simultaneously challenging, uncomfortable and necessary.

On the 17th of March, my colleague Sarah Huque and I attended an online roundtable discussion hosted by the Psychological Society of South Africa (PsySSA) entitled Suicide in South Africa: An Intersectional Dialogue. I was looking forward to the discussion, both as a researcher who works on suicide and as a research psychologist who previously trained and worked in South Africa.

I was particularly looking forward to the ‘intersectional’ focus of the discussion. The roundtable brought together the Operations Director of the South African Depression and Anxiety Group (SADAG); a mental health journalist who had lost her son to suicide; a psychiatrist; and a journalist who has survived “suicidal ideation/experimentation” (their words).  The panel was attended by nearly 250 people, from across South Africa.

However, I was disappointed to discover that the discussion was dominated by a narrow, individualised, medicalised understanding of suicide. Someone repeated the phrase “the most dangerous kind of depression is an unmedicated one” and the psychiatrist proclaimed that “90% of those who die by suicide have a mental illness”[1]. The panelist from SADAG mentioned that since the beginning of the  COVID pandemic they were experiencing a dramatic increase in calls to their crisis hotline but in the panel discussion there was no connection made between this increase and the particular social realities of South Africa, which has often been described as “the most unequal country in the world”. For me this was a clear and problematic missed opportunity to explore how the COVID-19 pandemic has intersected with existing social inequalities to make lives unliveable for millions of people in South Africa. This was but one example of the failure to engage with issues of inequality during the discussion.

By the end of the session I was feeling extremely frustrated and angry. In conversation with my colleagues in the Suicide Cultures project the next day, we reflected on how these kinds of discussions perpetuate decontextualised understandings of suicide. Spurred on by my colleagues’ shared concerns, I decided to write to the organisers of the event and express my disappointment. In my email I explained how I was especially disappointed by the lack of reflection on and engagement with the structural conditions which produce distress, in light of South Africa’s various intersecting legacies of inequality. I also noted that I felt PsySSA, as the representative body of psychologists in South Africa, had a responsibility to promote more holistic, ethical and contextually-relevant understandings of suicide rather than merely perpetuating individualised, psychiatric ones. I felt slightly better having, at least, articulated my frustration in this way but I did not have high hopes of a constructive response.

I was pleasantly surprised to receive a response a few days later acknowledging my concerns and inviting me to participate in a follow-up question and answer session. I was invited, during this session, to share my reflections on the initial discussion and to pose some questions to the panellists. I was both pleased and daunted at this opportunity to interrupt the discussion about suicide, especially as someone who is not a clinical professional. But I also felt a sense of responsibility to insert issues of inequality into the discussion of suicide, so I accepted the invitation.

I began my reflection by noting that the initial session had focused predominantly on identifying “signs” that people may be suicidal; promoting medication as the most effective treatment of suicidal distress; as well as suggesting that people who are experiencing suicidal distress can be protected using (coercive) forms of surveillance. I reflected on how these kinds of discussions are part of dominant ways of thinking about suicide, not only in South Africa but across the globe. I noted that it was important to expand understandings of suicide beyond these narrow focuses in order to more meaningfully contextualise people’s distress. Informed by many of the discussions we have had as the Suicide Cultures research team, as well as engagement with work of others in critical suicidology, I then posed the following questions:

Unfortunately, two of the previous panellists were unable to join the question and answer session due to load-shedding[2].  However, it seemed the questions I posed spoke to many of the challenges that South African psychologists and counsellors were facing, with many of them sharing their frustration about the difficulties of supporting people struggling with distress. There was also much discussion about inequalities in terms of being able to access mental health care, particularly for people living in rural areas. In this way, the critical interruption that I posed appeared to open up ways to talk differently about suicide. This was an important reminder of the power of interrupting normative conversations about suicide and how these interruptions can reframe suicide in relation to issues of social inequality. This is part of the work that we as the Suicide Cultures research team are doing through a variety of channels, including our seminar series, podcast and this blog.

[1] For reflections on the problematic nature of these kinds of statistics see Examining the Claim that 80–90% of Suicide Cases Had Depression – PMC (nih.gov).

[2]  Load-shedding refers to scheduled rolling blackouts due to an insufficient supply of electricity, which is a relatively frequent occurrence in South Africa.

Do you want to learn more about LGBT+ youth suicide? Are you keen to think about practical strategies for prevention? Do you want to meet others who are interested in doing similar work? Come along to our event on the 24th November 4-6pm to find out more! 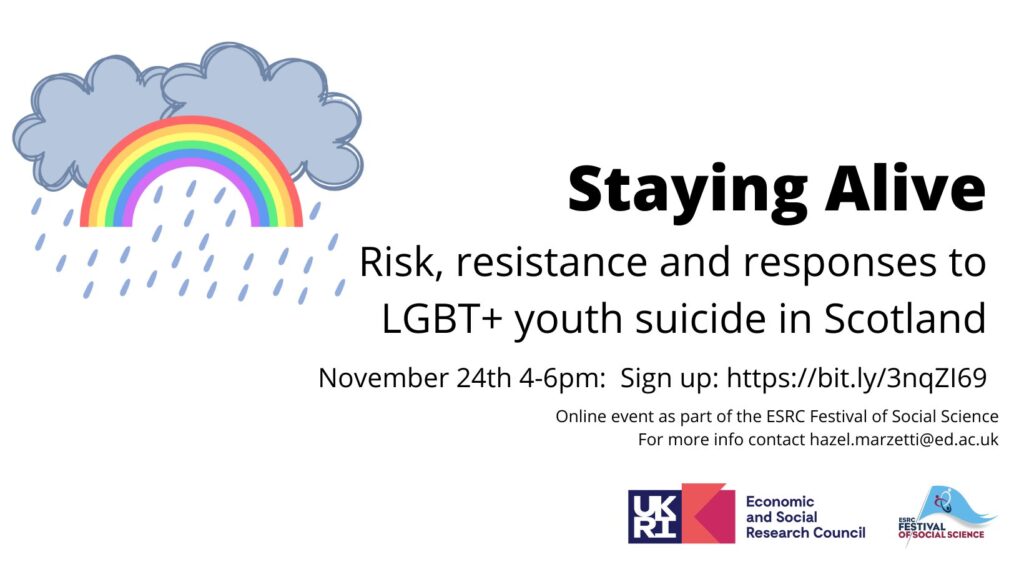