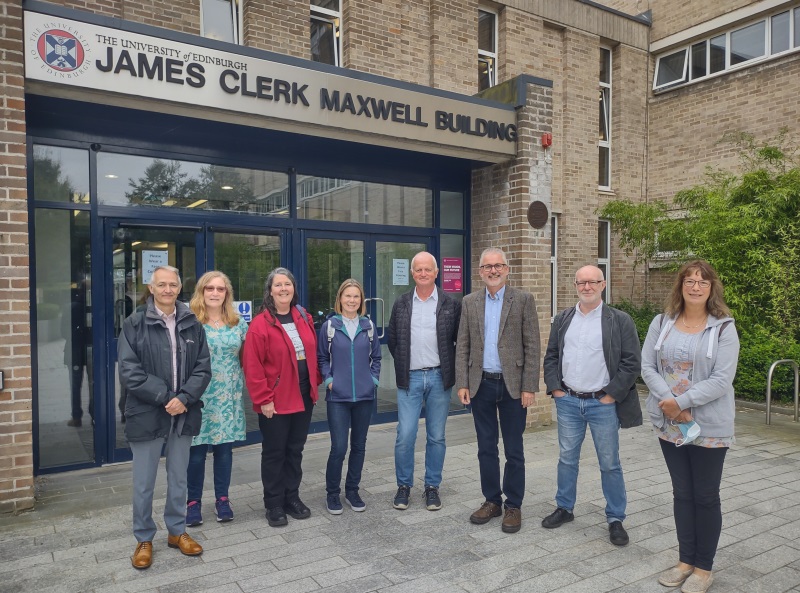 Forty years had passed since they graduated when alumna Lesley Henderson arranged for a reunion and visit to JCMB with some of her former class mates. What do they remember from their student days? And what career journey did they take on leaving?

The group share their memories from the late 1970s and early 1981s. In the days when notice boards were the place to get information, and annual parties were held in the Magnet Café…

Looking back over your time here, what advice would you give our current students?

SM: Work with and help your peers. You often learn more when explaining things to others than just trying to absorb things.

KH: If you don’t understand something don’t instantly assume you are not capable. Insist on having things explained.

What skills did a physics degree give you?

DM: What uni taught was the ability to test and think logically, and also a disciplined approach to what you know, so you can research what you don’t know. There are a huge amount of things you learn which aren’t directly related to content – a learning style. Also self-sufficiency was important – looking things up, finding things out for yourself, not waiting for someone else to tell us. Also making mistakes – you know there is an answer out there. If you can’t find the correct answer your workings must be wrong, so find out what point to unpick then move forward. But it’s a process.

KH: I have forgotten most of the physics, but not forgotten the way of thinking: stating problems and stating assumptions. From then, you can work out a solution. For me that analytical approach cuts across all aspects of life.

What were your first impressions when you started university?

HWK: I came straight to the second year of the degree and I found it was such a huge jump from school. Even though I had covered a lot of the subject, it was the way of teaching that was tricky. I found the tutorial problems so hard and I thought “I’m so stupid, I can’t do these things”. It wasn’t until the end of my first term that I mentioned this to somebody else who said they found it hard too.

KH: I failed everything at the end of the first semester, and I had never failed an exam in my life! I went back to my high school during the holidays, and it was my old maths and physics teachers who basically taught me how to go through a lecture. I saw my Personal Tutor every week after that. It was this jump from school to lectures – I didn’t know how to approach it.

SM: You were coming into a set up where there was no internet, no email, no phones and you kind of had to find out everything for yourself, so it was quite tricky.

DM: Communication in those days was picking things up on notice boards. So you were always in doubt if you were reading the right notice board for instructions.

Tell me about your journey since leaving university

HKW: I went on to do a PhD at Cambridge. I worked in instrument design for a bit with Philips. I was made redundant, did various jobs after that. I’m now a scientific librarian. I work for a small geological company, and a lot of the stuff is in Russian, so I’ve had to learn that.

SM: I thought I was going down one route, then a series of things happened and I ended up on a different route. I worked in telecoms for 40 years. I have never used physics per se, but what was necessary for my roles was a technical background and the ability to think through problems.

DM:  I worked in IT, in the finance sector for 34 years. We graduated when IT was starting to blossom, and there were various careers opening up.

JF: I worked in broadcast engineering and manufacture then I fancied a change. I had always enjoyed computing. I did some career profiling, and it came back suggesting computing. So at age 30 I started a graduate trainee scheme and I have been doing financial IT for 31 years. Physics gives you the confidence to tackle quite complex stuff. Pure physics I used very little of however.

JP: I got a job with Optical Coating Lab Incorporated and worked as an optical coating design engineering for a couple of years. I particularly enjoyed training new staff, so I then decided to go into teaching physics.

KH: My first job was as a programmer but after a while the company closed. I  worked for Edinburgh University Artificial intelligence – but it wasn’t my cup of tea. Then I got a job at Hewlett Packard as a systems manager. After that I decided to change direction completely and retrained as a physiotherapist. At one stage I was lecturing physics to physios, which was interesting! They had to learn physiology and nerve conduction, so it was really basic physics.

PH: I went to UCL to study for a PhD, worked there as a research fellow, then got a lectureship in physics at Brunel University. Sadly the department got cut. I then reinvented myself as an electronic engineer. I continued to worked at Brunel University for 19 years, ending up as the Head of Engineering.  I am currently Head of the School of Physical and Chemical Sciences at Queen Mary University of London. Bizarrely, given the number of physicists I know and have collaborated with, including some based in Edinburgh, I have never been back to JCMB until now.

How did you find living and studying in the city of Edinburgh?

JP and PH: It is very easy to walk between places, between classes.

KH: One of the things for me coming here as a student was the variety of people here from all over the world.

DM: It’s also a good city if you want to get fit. If you live on the other side of Princes Street, get a bicycle, and cycle up Hanover Street. That is quite character building!

KH: From the end of second here I stayed here during the holidays, and the Fringe festival was an eye opener. I saw so many things which covered what I was interested in.

KH: I remember one time sitting here in JCMB and a student saw the snow on the Pentlands and decided to take the afternoon off to go skiing.

If you wish to visit, get in touch with us via enquiries@ph.ed.ac.uk – we would love to hear from you. Find out about the University’s alumni services:
Alumni | The University of Edinburgh

Class of 1981 / School of Physics and Astronomy by blogadmin is licensed under a Creative Commons Attribution CC BY 3.0