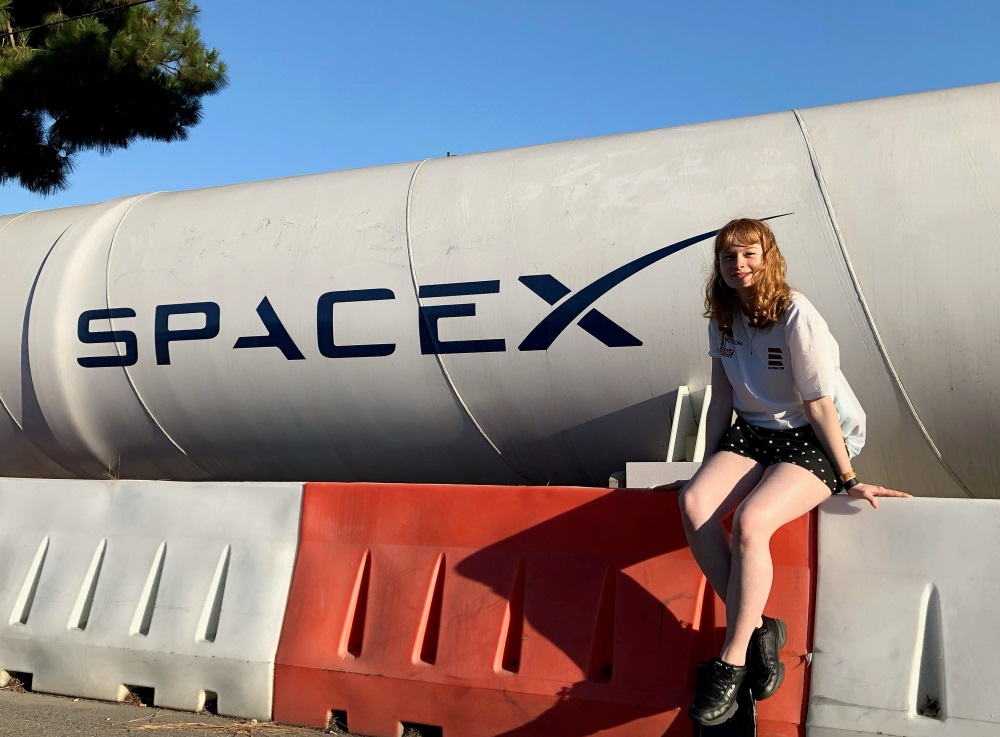 Luisa Schrempf became involved in the student Hyperloop team, HYPED at the start of her MPhys Physics degree, firstly as a Team Member, then as Head of Propulsion, and now in year 3 of her studies, she currently holds the role of Academic Advisor. In this article she shares feedback on the vast range of skills and experience gained from being part of HYPED.

“What I am really learning during my time at HYPED is what it means to work on a huge project with other students.” Expanding on this, Luisa explains that during her time as Head of Propulsion, her role was to oversee the design of the team’s motors. “My role involved working with the other teams to make sure that the motors that we were making were feasible for the entire pod, and that all parameters would be correct. I sought guidance and help from professors as well as uni staff to help with tackling potential problems, and also to try to mitigate those in advance. In addition, as our project involved creating a real product, we had to talk to industry and the people who might be able to make the parts we were looking for, and negotiate what this would look like and the prices we would have to pay, because, after all, we were on a budget.”

Luisa was also keen to implement what she learned the previous year, when the team had run out of time during the Hyperloop competition. “In the summer, I wrote a proposal for an MEng project focussing on the optimisation of design parameters. Part of my role was to set clear goals we needed to work towards.”

Ensuring the team worked well together was also important. Luisa says she tried to create an atmosphere of learning and making friends along the way, as well as making sure everyone felt they had a part to play in the team, especially since the Propulsion Team consists of 12 students from 10 different nationalities. “One challenge of the task was communicating appropriately with people from such a variety of backgrounds and finding common ground.”

Although prior experience is not required in order to be part of HYPED, there is some overlap with physics.

“During my time at HYPED I acquired a lot of specific knowledge on applications of electromagnetism which now helps me immensely to visualise the concepts which I am learning about in class. In physics things are inherently theoretical, but now I try to think in terms of: How can I apply this to some problem? Or how can I use this knowledge to create a product?”

Luisa also found that the project planning and time management skills helped with her coursework: “I learned how to approach a substantial task and think about how I can break it down to smaller chunks and reach those milestones so I finish something on time and achieve the best results.”

HYPED is a team of students at the University of Edinburgh dedicated to developing the Hyperloop concept: using electromagnetic propulsion to accelerate a passenger or cargo pod through a low[1]pressure tube.

I asked Luisa why she became interested in HYPED in the first place. “I wanted to work on a large scale engineering project, do some team work and learn skills. As to why I joined the Propulsion Team, I was very interested in and excited about the idea of magnetic propulsion. I also thought it was the most closely tied in with my degree.” Her initial role (as Team Member) was using Computer Aided Design (CAD) to help the team turn the theoretical ideas to a finished product.

“What I like about HYPED is that you don’t need any experience. HYPED really is for everyone. As long as you are highly motivated and have a strong drive and determination to put in a lot of time, then anyone can get involved.”

The Hyperloop Pod Competition is an annual event held at SpaceX in California where teams participate in designing and building a subscale prototype transport vehicle in order to demonstrate aspects of the Hyperloop concept.

“The competition in California was an amazing experience. After a year working with these lovely people (around 20-25 students from HYPED travelled to the competition in summer 2019), being able to become friends and have that team building experience and go through the hardships together it was extremely rewarding.”

It was not just the competition itself which was valuable: “The competition was held at the SpaceX headquarters and we had lots of interaction with the engineers working there. We also got to visit the Jet Propulsion Laboratory where they were building the Perseverance rover which has just landed on Mars.”

Luisa also tutors physics to high school pupils from her native Austria. I asked her how she manages her time to fit in her studies, work and role at HYPED.

“When I am actually doing my tasks I use the Pomodoro method – that is setting a certain amount of time for a task and then a certain about of time for a break, more precisely 25 minutes for the task and 5 minute break. It helps me to be productive, and it especially helps me if there is a task I haven’t yet found the motivation to tackle. Sometimes starting a task is the hardest part. Once I had a piece of coursework that I was putting off for a little while and I was actually able to complete it in 25 minutes. Sometimes you don’t realise it’s actually easier than you imagine it to be.”

How has her experience as part of HYPED helped in terms of her future career plans? She said that although it is still early days: “HYPED has helped me to start to dream big: what’s out there, and what can I do – and it’s helped me motivate myself to reach my goals.”

Find out about other student opportunities to develop your skills via the Careers Service webpages:

Learn more about the Pomodoro method:

Getting HYPED about transferrable skills / School of Physics and Astronomy by blogadmin is licensed under a Creative Commons Attribution CC BY 3.0

One Reply to “Getting HYPED about transferrable skills”