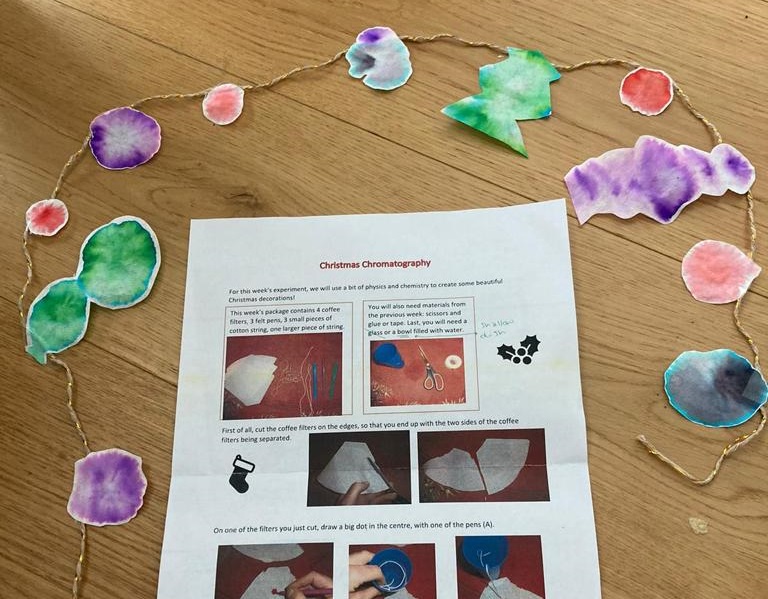 Every one of us has been affected by the pandemic in different ways. But how have members of the Physics Outreach Team faced the challenges and kept local school children engaged in science?

As the regulations have been continuously changing, Annabelle and Cristina have put in more effort than usual in order to overcome all the challenges of remote working. They prepared all the science materials in advance, which involved creating introductory science videos, and then sent kits to six primary schools. They were supported by the Team leader, Dr Jean-Christophe Denis, and his colleagues from the School of Biological Sciences and the BioQuarter.

The primary school pupils joined the online sessions from their homes, and the experiments were conducted live, with the aid of the pre-made videos.

Even though it has been more challenging than usual, and sometimes unavoidable issues occurred due to technology problems, Annabelle and Cristina have managed to do such a fulfilling job. The children have stayed engaged throughout all the science clubs and showed a lot of enthusiasm. Annabelle and Cristina confessed that the children were so engaged that at every session at least two Physics Outreach Team members needed to be there – one to lead the experiments in front of the camera and the other one to monitor the chat.

As primary schools have reopened recently, the sessions are still going ahead, although in a slightly different form.

Even though the current circumstances are insecure, it is worth acknowledging the efforts and motivation of the students involved in these science clubs. It has definitely made an impact and inspired local children.

If you are interested in being involved in the School’s Physics Outreach Team, contact Dr JC Denis:

Read more about work of the Physics Outreach Team:

Science clubs: engaging local school children in science / School of Physics and Astronomy by blogadmin is licensed under a Creative Commons Attribution CC BY 3.0