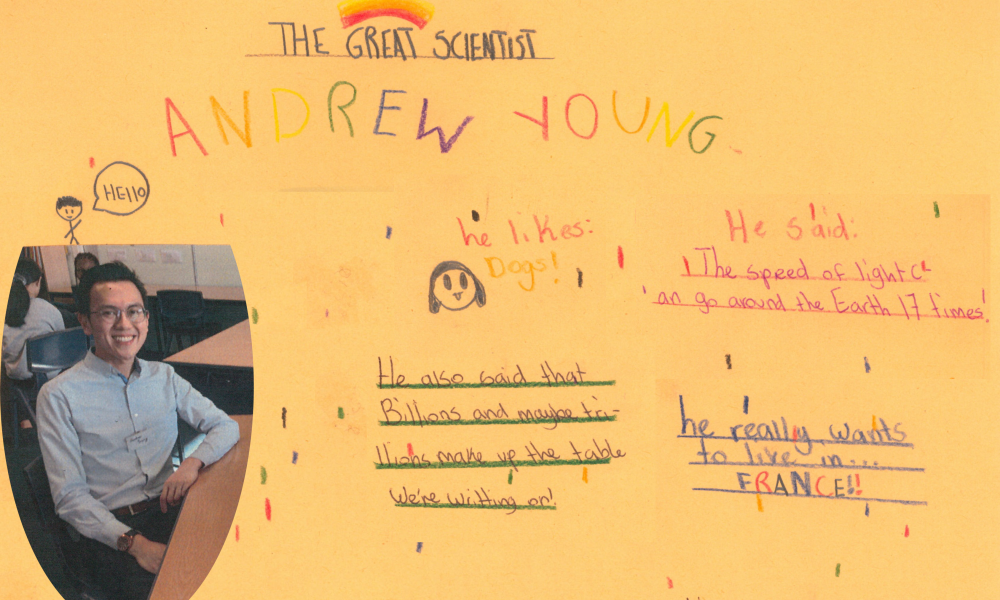 Pupils from Craigour Park Primary School in Edinburgh interviewed some of our staff and PhD students about their research.  In this article, they quiz PhD student Andrew Yong about quarks and his dream job!

Explain your work in a few sentences.

I am a PhD student, so I do research in particle physics.  It’s a bit like studying the Lego blocks that make up our universe.

When you were younger, what was your dream job?

My initial ambition was to be an orchestra conductor, but it was only later that I wanted to do physics.

What is your biggest achievement in your work?

My biggest achievement is going through the interview process and getting to do my current research in Edinburgh.

Can you explain what a quark is?

Imagine playing with Lego and building a house. Everything you see today can be built from smaller things that are called atoms. Atoms are made of smaller particles called protons and neutrons. Protons, they are made of the tiniest possible Lego blocks – these are quarks. They are the smallest objects that make up the world.

How many particles do you think make up this table?

I think we are talking big numbers because particles are small. I am thinking it would be around a trillion billion atoms.

Give us a fact about supercomputers or the universe that you think will blow our mind!

Do you know that the speed of light is the limit of the universe? Speed of light is the fastest thing in our universe. Our universe is so big that if you shine a light on one edge of it, it would take the light tens of billions of years to go from one edge to another. Just to give you an idea, in just one second (like, now) light can travel 17 times around the earth.

If you didn’t live in Scotland, where would you live and why?

I would like to live in France because the temperature is nicer and I like their food, such as bread and croissants.

If you could describe yourself in three words, what would they be?

Friendly, hardworking and a learner.

What advice would you give to somebody that would want to become a scientist?

Stay curious. There are a lot of things happening in the world and you just have to tune into whatever interests you and research it at University.

Interview with Andrew Yong  / School of Physics and Astronomy by blogadmin is licensed under a Creative Commons Attribution CC BY 3.0