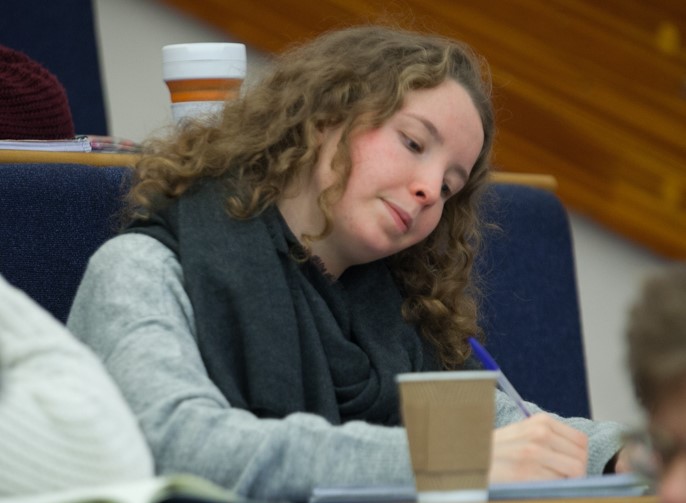 Sara, a 3rd year Theoretical Physics student from Germany, explains how she enjoyed learning foreign languages at the University of Edinburgh, and reflects on how this could help her in her future physics career

When I chose to study physics at the University of Edinburgh, I mostly thought about how well I would learn about physics in the School of Physics & Astronomy. However, I also knew I wanted to use my time at university to learn more than just one subject. As a European student, the reason I was able to study in Edinburgh to begin with was because I had learned English as a foreign language in school. So, when I started university, I decided to invest my time to learn at least one foreign language during my Undergraduate degree.

In first and second year, physics students have to take optional courses on top of their core courses. Most of my fellow physicists chose courses from other science departments, but I decided to use this opportunity to learn a foreign language instead and went for French. My personal tutor and the academic staff at the French department were fantastic and supported me in finding the right course for my level. This positive experience motivated me to start learning Italian too, and within one semester, I developed from a complete beginner to someone who could hold a conversation. In my second year I also joined the Centre for Open Learning at the University of Edinburgh and attended a two-hour Russian class one evening a week. Despite Russian being quite a difficult language for me, less than two years of classes were enough to get me to a level where I could understand and hold (basic!) conversations.

My ‘hobby’ of learning foreign languages is probably not very common amongst physics students, and since English is spoken in scientific communities around the globe, one might argue that it is not the most useful skill to have. At least when I started university, I never thought that I would get any career benefits out of my language skills. However, my experiences in the last three years taught me quite the opposite.

It is not uncommon for physics students to end up in a career outside science. When trying to distinguish yourself from hundreds of other applicants, good grades are sometimes not enough. Having extra skills on your CV can help you to stand out, especially when the job is based within an international company. Having said this, learning new languages can have a lot of advantages for physicists too. When I applied for internships in European companies last summer, I realised that highlighting my language skills contributed to making my application stronger. Similarly, representatives from CERN who gave us a talk about internships and recruitment, stressed that speaking French would be an advantage for anyone looking to work at CERN.

For me personally, speaking different languages has also opened a completely different career path. I have a keen interest in nuclear physics and safety, and I would love to work for an international agency such as the International Atomic Energy Agency, where speaking several languages, especially official UN languages, is almost a prerequisite.

For now, I am continuing my studies happy to know that the education I am getting here at the University of Edinburgh doesn’t just qualify me as a physicist, but will enable me to work and succeed in a multitude of environments and careers, wherever that may be.

From Germany to Scotland: studying physics and … foreign languages. An undergraduate experience. / School of Physics and Astronomy by blogadmin is licensed under a Creative Commons Attribution CC BY 3.0