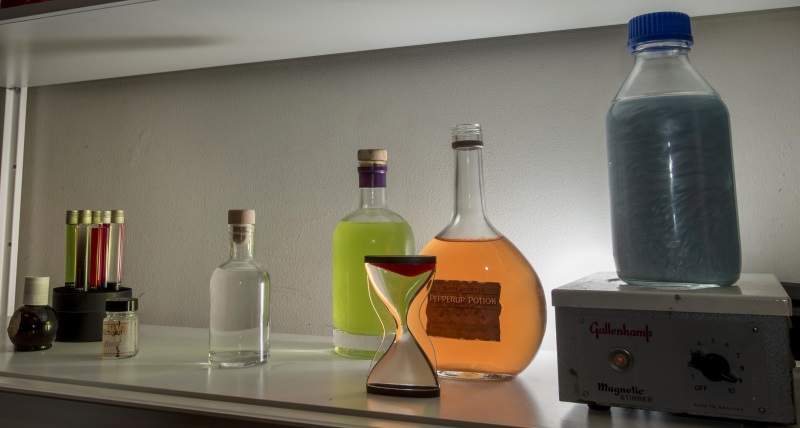 Last year I joined the School of Physics and Astronomy’s first Outreach Team which was set up by Dr JC Denis, the School’s Outreach Officer.

For those wondering, outreach can be boiled down to taking science out of the labs and in front of the public. When I volunteered for the team, I went in with the intention of spreading the good word of physics to the next generation of potential scientists. By the end of the year, I had gained one of the most important skills of my academic career: the ability to tell people what I’m doing.

One of the events I took part in was the Edinburgh International Science Festival: a celebration of all things science which are designed to inspire and excite. During this event, the School Outreach Team took the magic of physics to a whole new level with a series of Harry Potter potions workshops. The everyday science experiments were disguised as magic as they were shrouded in a veil of mysticism, wonder and D grade acting.

While the capes and the wands drew in the attention of children and parents alike, it was the explanation of the workshops that mattered the most. I was responsible for ‘divination’ experiments to illustrate the Marangoni Effect. Each participant would be given a petri dish filled with magic water and then they would add drops of different coloured magic liquids and watch some liquid being repelled by others. I would fumble my way through the participant’s fortunes and futures (putting on my best Professor Trelawney impression) before revealing the science behind the magic. The Marangoni Effect is defined as ‘the mass transfer along an interface between two fluids due to a gradient of the surface tension’. For me, the challenge was taking this concept and distilling it to a level that would be understandable to children and parents alike, without losing the wonder of the mechanics behind the effect.

Science communication shouldn’t be a skill reserved only for public speakers and educators, instead, it should be a vital skill for every modern scientist. Many scientists lack the ability to convincingly explain to their friends and family what it is they do for a living. When it comes to a justification for why we do what we do, many are often told just to ‘trust us, we’re the experts’. This only helps to bolster the cloud of mystery that surrounds science that leaves the public wary to trust it. If you want to try your hand at strengthening this vital skill, consider volunteering for the School’s Outreach Team.

Science communication: a vital skill in a scientist’s toolkit / School of Physics and Astronomy by blogadmin is licensed under a Creative Commons Attribution CC BY 3.0