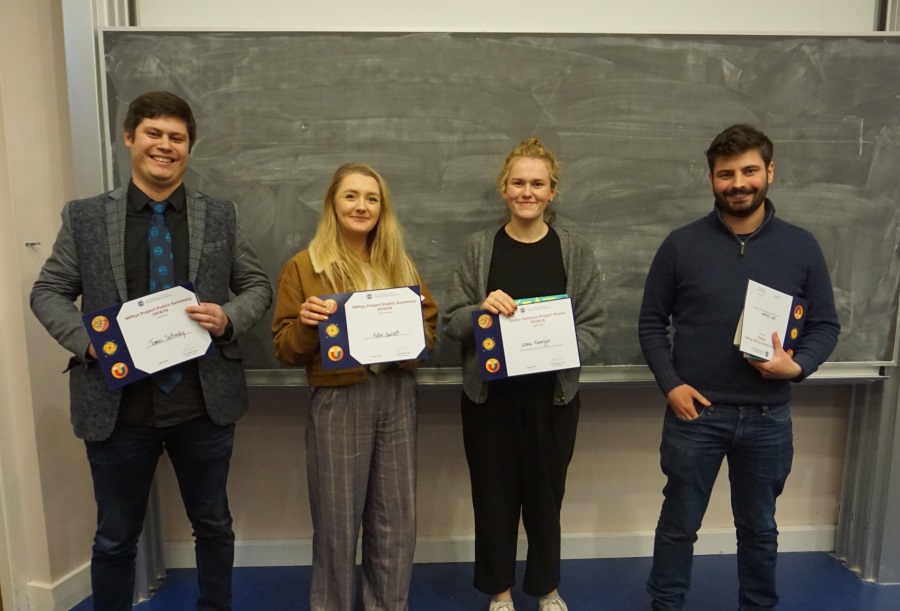 Photo: some of our Senior Honours and MPhys student prize winners.

One component of our undergraduate degrees is to enable students to cultivate the experimental design, project management, technical and presentation skills which are needed to work successfully in a physics-based research environment.  This is achieved primarily through the Senior Honours and MPhys Projects.

More specifically, students undertaking these projects learn to: conduct and summarise the crucial aspects of a literature review; organise and use a comprehensive log of the work completed in their project; and write a report on the pertinent aspects of the method and produce a critical discussion of the results and conclusions. MPhys students also have to present an oral summary of the aims, methods and results to their peers, and design and produce a web-based summary for a lay audience.  These students undertake their project work within one of the School’s research groups – thus working alongside current researchers and gaining a direct experience of work within a research environment.

In order to showcase student projects, the School organised its first Undergraduate Research Conference this April.  During the conference, students and staff had the opportunity to view the Senior Honours Project Posters produced by year 4 students and the MPhys Project Public Summaries produced by year 5 students.  Conference attendees heard from alumna Anna de Graaff whose talk on ‘A search for missing baryons in the cosmic web’ reflected on her undergraduate project which became a refereed journal paper, and Dr Paul Clegg who described his supervision of a student’s project which formed the basis of a published paper.

At the Conference, prizes were awarded to the students who produced outstanding project posters and public summaries.

Georgia Clark – for a murder mystery at the LHC

Harry Carstairs – for an interactive outreach exhibit on ultrasound scans

Due to the success of the conference, and positive feedback received from students, the School aims to run this as an annual event.

Prizes, presentations and showcasing undergraduate student research / School of Physics and Astronomy by blogadmin is licensed under a Creative Commons Attribution CC BY 3.0