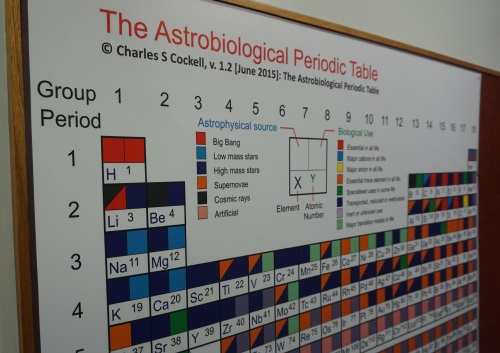 Charles S. Cockell from the UK Centre for Astrobiology (UKCA) at our very own University was involved in the creation of the Astrobiology Periodic Table. Reminiscent of the logic that Mendeleev himself followed in the creation of the modern periodic table, this Astrobiology Periodic Table serves its user as a compartmented ‘Lego box’ that shows how all the elements in the modern Periodic Table are involved in life as we know it. From how the elements are formed, to their biological use, the Table shows vital information for astrobiologists, astrochemists and astronomers at a glance.

Prof Cockell and his colleagues at the UKCA are involved in a myriad of scientific endeavours. From bringing science to the narrow confines of prison cells via “Life Beyond”, to exploring the possibility of life on Mars. The centre is also involved the “Astrobiology Academy” for implementation into the school curriculum and many more public engagement events where they discuss the very essence of life with people.

For example, their research into life in extreme environments is carried out on Earth in a variety of analogue scenarios. They examine life in sulfidic springs, lava terrains, mine shafts – such as Boulby – and bodies of water like Lake Graenavatn in Iceland. These environments allow researchers to not only study how life might fare in these areas but also improve technologies and materials that we would like to send into space!

I asked Prof Cockell a few questions about the Periodic Table:

Q When was the first instance you thought that an Astrobiology Periodic Table would be useful?

A It occurred to me whilst preparing the Wiley-Blackwell textbook: ‘Astrobiology: Understanding Life in the Universe’ that it would be useful to show where the elements came from and what they do in life – a sort of astrobiological perspective on elements. The obvious way to do that is using a Periodic Table.

Q Is there anything you feel that needs to be added to the Table?

A It would be good to add more information on biological uses, but at the same time it currently has a simplicity that I think is good.

Q What’s the most exciting astrobiological event you are looking forwards to in 2019?

A Hopefully flying our experiment to study microbes on the International Space Station. More widely, European and US preparations for missions to Mars.

One of the missions to Mars that Prof Cockell refers to is the U.S. mission to mars by NASA named “InSight”. The mission is “designed to give the Red Planet its first thorough check-up since it formed 4.5 billion years ago. It is the first outer space robotic explorer to study in-depth the “inner space” of Mars: its crust, mantle, and core.

For more information on this mission: https://mars.nasa.gov/insight/

Astrobiology Periodic Table / School of Physics and Astronomy by blogadmin is licensed under a Creative Commons Attribution CC BY 3.0