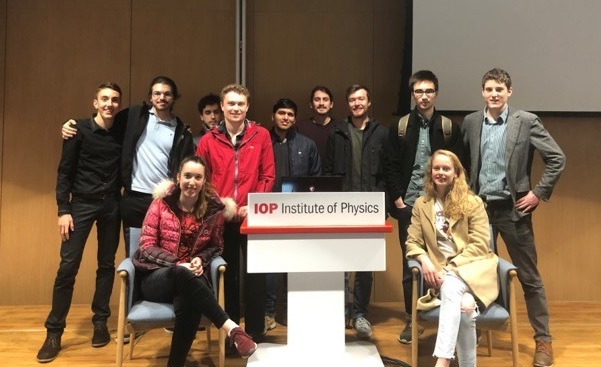 Photo: University of Edinburgh teams at the PLANCKS Preliminaries

Congratulations to Christos, Ethan, Mike and Matthaios who made first place in the PLANCKS UK preliminaries, and to the University of Edinburgh teams who made it to places 4, 6, 8 and 10 out of 19 teams!

Christos, Ethan, Mike and Matthaios now have the opportunity to participate in the international final which takes place in Denmark in May as members of the UK delegation, alongside teams from Kent and Oxford.

The competition, with a four hour exam, was held at the new headquarters of the IOP at King’s Cross in London. The School of Physics and Astronomy fielded a strong contingent to the competition. Although the exam was viewed as much tougher than in previous years, 5 of the teams in the upper half were from Edinburgh!

This year’s problems included topics ranging from fluid dynamics, to non-equilibrium statistical physics first-passage problems, and even modelling a water wheel from first principles! Presenters at the event discussed the workings of the Antikythera mechanism, and examined shockwave physics at the NIF laser facility in the USA.

The teams JCMBeasts, geDANKen, and Team Edinburgh were evidently left with big smiles after the competition!

PLANCKS (The Physics League Across Numerous Countries for Kick-ass Students) is a theoretical physics competition for bachelor and master students. The final competition is a three-day event containing an opening symposium, the contest itself, and filled to the brim with numerous excursions and social activities. The intention is to increase international collaboration, host social activities and stimulate the personal development of individual contestants.

PLANCKS is run by the International Association of Physics Students (IAPS) – an association of physics students and student societies from around the globe.

Edinburgh teams storm PLANCKS Preliminaries / School of Physics and Astronomy by blogadmin is licensed under a Creative Commons Attribution CC BY 3.0