I don’t seem to find time for this blog unless I am on strike; the last two posts come from the strike of late 2019 and this one is written on the first day of the strike in February/March 2020. (Previous strike posts here, here and here.) I think I have said enough about the strikes already; instead, I am planning a few posts on actual science that I have not had time to get written.

This post was motivated by this stone wall, not far from my home in Dunbar. 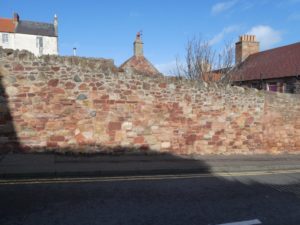 I have remarked in several posts in the past that stone walls often give interesting clues to the local geology. But this bit would tell almost the entire story, if only one knew where the individual stones came from. Most of the wall is sandstone which probably comes from the local bedrock: the late-Devonian Stratheden and Inverclyde groups, or possibly from the nearby early Carboniferous Ballagan formation.   Some has plane bedding …

… other bits have current-bedding structures on small scales …

Some of the sedimentary rocks present probably come from a bit further afield.

This bit has fossilised crinoids in it and probably comes from the mid-Carboniferous lower limestone formation, a couple of kilometres east along the coast — you can easily see similar crinoids in a similar matrix in-situ if you walk far enough along the shore past the golf course. I have no idea where this messy lump of conglomerate comes from:

In addition to sedimentary rocks, the wall has some igneous rocks.

This bit, with its interesting concentric structure, is part of a basalt column. (I have written about basalt columns before.) There is a whole house built of this stuff in Castle Street, and you can see plenty of it in-situ under the battery at the harbour (as long as the lift bridge is down). The current geological map labels it “East Lothian Basanite And Foiditic Plugs And Vents”.

This purplish lump of volcanic ash or tuff might come from the vicinity of the castle at the west end of the harbour. The Victorians blasted a lot of this rock away to make a new harbour entrance.

This bit is more mysterious. It is clearly a hard, fine-grained igneous rock, a basalt of some sort,  and its rounded nature suggests that it has been in the sea or a river before ending up in the wall. It could have come from quite a long way off, as could this coarser-grained stone.

I suspect an expert might call it a gabbro, but igneous petrology is not my strong point. Both of the dark-coloured igneous rocks may come from no further away than the various dykes dating to late Carboniferous/early Permian times which may be found at various places along the coast. 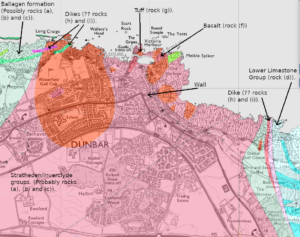 The geological map shows the location of the wall, and my guesses as to where the most of the rocks shown above might have come from. It is all just moderately informed guesswork, of course: once a rock has been found or quarried and built into a wall its exact geological context is lost.

Writing on the wall / Hugh's Geophysical Blog by blogadmin is licensed under a Creative Commons Attribution CC BY 3.0