I went to Malham, in the Yorkshire dales, for the weekend. The trip was worth it for the company, but was otherwise highly unsatisfactory: the weather was terrible and I lost my phone on the drive down. (Fortunately, I managed to recover it on the way home,  from the cafe where I had left it.)

Saturday was not a day for taking photographs of the beautiful limestone terrain, most of which was not visible through the rain. I was reduced to looking at things that were a bit closer. I have noted in the past that you can often tell when you are close to a boundary between two rock types by noting that the drystone walls contain two different sorts of stone. In this case, most of the wall (including the bit on the left) is made of limestone, but the bit on the left is clearly a very coarse sandstone. 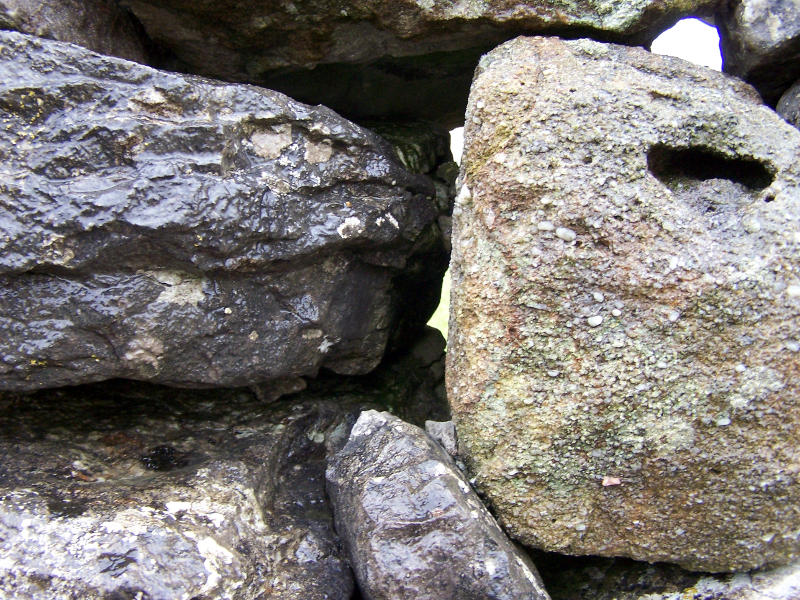 A quick check of the geological map shows that the wall is at a spot where the bedrock is limestone, but the transition to the Bowland shales and the Pendle Grit is within a kilometre, so it is not surprising that there is a chunk of gritstone in the wall.

On the drive home we went past more drystone walls. Our route went through Stainforth and Horton-in-Ribblesdale, taking us through a small area of rocks which are considerably older than the limestone. The difference in rock type was obvious from the walls, even though it was not really the weather for getting out of the car to look for a proper exposure of the bedrock.

Mr. Grumpy goes to Yorkshire / Hugh's Geophysical Blog by blogadmin is licensed under a Creative Commons Attribution CC BY 3.0

One Reply to “Mr. Grumpy goes to Yorkshire”